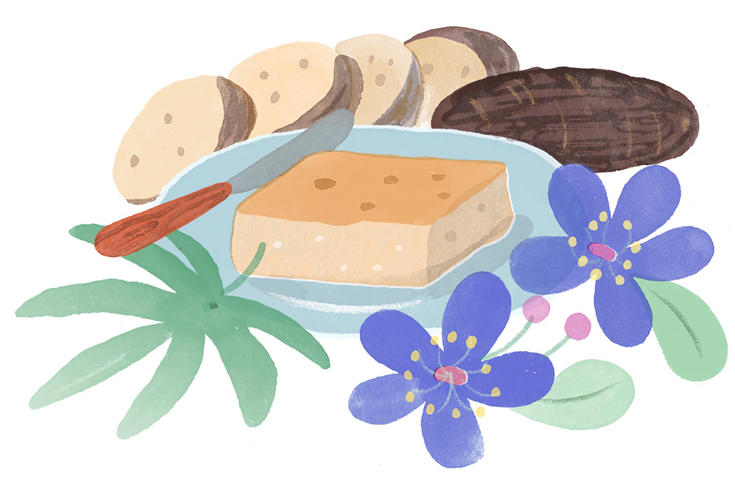 The word hurricane, I learned this past spring, comes from huraca’n, the Taíno word for the violent storms believed to have been creat­ed by a goddess and her two accom­plices. Every year, the Taíno, an Indigenous people in what is now Ja­maica and other parts of the Carib­bean, weathered the destructive phenomena with a mixture of fear and respect. As I read further about Taíno survival practices, I was startled by their method of evading another devastating force—enslavement at the hands of Christopher Columbus, whose ships arrived on the shores of what is now Jamaica in 1494. Some Taíno killed themselves by ingesting cassava root, which, when eaten raw in large enough quantities, can produce deadly levels of cyanide. Suicide by cassava poisoning.

It took me a moment to process this history of a food so familiar to me. In my half­-Jamaican family, cassava—a white­ fleshed fibrous tuber with thick brown skin—is not a poison. It’s the main in­gredient in a fluffy dessert pie. It’s the fried slices we eat with a garlic ­and­ vinegar sauce. It’s essential family food to celebrate a milestone or mourn a death or acknowledge gathering at the same table. It’s also the texture I crave when I’m feeling stressed or anxious, which right now is all the time.

We can safely eat cassava because the Taíno learned to soak the raw root meat in water to leach out the cyanide. Learn­ing about cassava’s toxic side, I grew to appreciate its dual power—a means of survival for the Taíno people, even if that meant not living.

My mother tells me that, in the Jamaica my parents grew up in, cassava, also known as yuca, was considered too time-consuming to prepare at home; there, it was and still is primarily used to make bammy, a starchy fried bread usually found in stores or restaurants. But, when my mother moved to New York City, in 1967, she discovered fro­zen, preshredded cassava in the ethnic aisle of the grocery store, and it soon became a household staple.

My mother got her recipe for cassava pie from a Filipina woman she met in New York, and the sliced, fried dish—yuca frita—is a Latin American way of preparing cassava she learned from a close friend. The Filipina woman did not write the pie recipe down, and my mother prepared many failures, in her New York apartment and then in our Florida house, before figuring out the right proportions of shredded cassava to coco­nut milk, butter, eggs, and sugar. Eventually, she shared the final instructions with the rest of the family, now spread out across Canada and the US, and the dish became ours.

Variations have since emerged: my late aunt liked to add shredded coconut, and sometimes I get stuck with the frozen whole cassava root I find in Asian gro­cery stores, which means I have to grate it at home and end up with a grainier pie filling. But we all agree it has to be baked and served in a rect­angular glass dish, which helps ensure an even top crust and maxi­mizes the number of slices to feed a crowd—with enough for leftovers.

When I told my mother, this past fall, about how the Taíno poisoned themselves with raw cassava to es­cape capture, she surprised me with her response. “Everything is con­nected,” she said. She’d never really spoken to me before about how she associated cassava with resisting colonialism. But learning about this moment in Taíno history helped her open up about how passing down her recipes became a way to preserve our family’s Jamaican heritage and work against the pressure to assimi­late in every place she lived. “We just have to overcome,” she said. “We have to try to take two steps forward and no steps back.”

I often wonder whether cassava will ever become trendy, ending up like oxtail—a poor cut of meat that was transformed into something delicious by en­slaved Africans and became a traditional dish in Jamaican cuisine. A few years ago, when oxtail began showing up on expen­sive dinner menus in Canada and the US, I rolled my eyes. I craved misshapen dumplings and chunks of meat on the bone in lieu of a plate of perfect gnocchi with slivers of undercooked tail treated like a garnish. But, with its ugly raw look and its starchy texture, cassava might just avoid a similar fate. It’s an ingredi­ent that works best when it isn’t made to be anything other than what it is.

Steph Wong Ken is a writer based in Toronto.
Tallulah Fontaine