How to Make the Perfect Popcorn | The Walrus
Skip to content 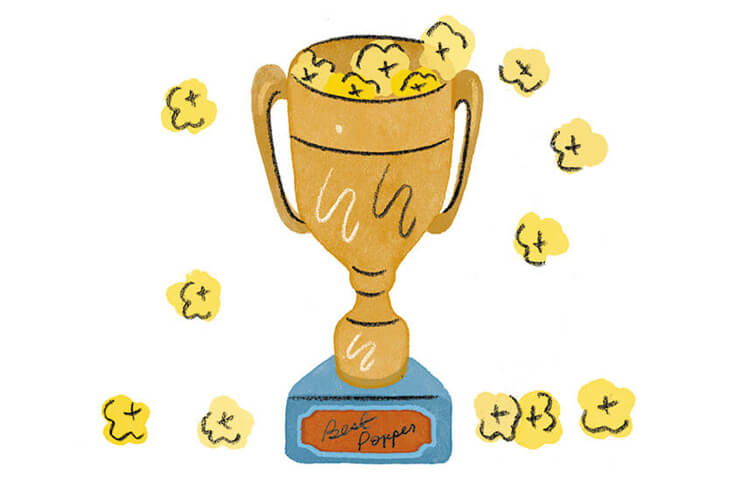 Popcorn is tied to the deepest recesses of my memory. But not the popcorn you probably just thought of. Movie popcorn with a golden shower of fake butter? You might as well lick a wet, salty sponge. Bagged Smartfood from the dollar store? Please. Oh, you microwave your popcorn? Stop reading now; never speak to me again.

My popcorn memories go back to when I was ten years old, excavating the depths of a giant metal bowl in small-town New York state. Each Sunday, with Godzilla or James Bond blowing things up on TV, my dad filled this bowl with popcorn. My brothers and I passed it around like an enormous communion chalice. The only things we fought over were the slightly popped kernels at the bottom. We knew better than to ignore them as “failed popcorn.” These were nuggets of pure flavour.

Think of the difference between boiled and fire-roasted corn on the cob. Boiled is still corn . . . but is it the best corn it can be? No. It’s secretly ashamed of itself. The popcorn I’m talking about—the Platonic ideal of popped corn—is nutty, browned, toasted, and crunchy, with a sliver of kernel breaking through the crust.

But the half-popped kernels of my youth were tooth-chipping land mines, and I’m not a ten-year-old watching Godzilla anymore. (I’m a fifty-two-year-old watching Godzilla.) My entire life, I have searched for a way to get that amazing taste in a more dental-friendly form. Along the way, I chipped two teeth and almost burned down an apartment with oil. Now that I’ve found a combination of the right process and the right kernels, I eat popcorn at least four nights a week—sometimes for dinner.

Ignore the first thing that pops into your head when you think of popcorn (likely Orville Redenbacher). The kernels used by such commercial brands are too big. The moisture inside a kernel is what makes it pop, and these have way too much moisture: the popped kernels end up like Styrofoam. After years of trial and error, I’m convinced the best variety of corn is Amish Country Lady Finger hulless. Each kernel, if handled well, turns into a tiny, almost perfect explosion of taste. A wave of melted butter enhances the flavour. Hell, you don’t even need butter.

Using the proper popping technique is key. Microwave is out of the question. Oil (in a pot or pan on the stove) is fine, but it leaves an oily taste that masks the corn flavour. There’s only one way to release the kernels’ hidden treasures: pre-pop them, then air-pop them.

I discovered this technique thanks to a happy accident. About ten years ago, I was preparing some hulless with one of my three vintage air poppers and had to step away. The partially popped kernels sat in the hot metal chamber for about ten minutes. When I returned and finished the job, the corn came out smaller, drier, nuttier. I had unwittingly eliminated some of the moisture. Like Proust’s petites madeleines, one nibble of the result transported me back in time. Now, I refuse to eat corn that isn’t cooked twice.

There are risks to the first method I discovered. The double air-pop leaves dry kernels in a burning hot chamber: Fire hazard, anyone? It also wears heavily on the popper because the electrical cord heats up as it sits, as does the plastic lid. I’m down to just one cracked and partially melted lid for my poppers.

I tried Option B next, spreading the kernels out flat on a baking sheet and slowly drying them in a warm oven. There’s no fire risk here—but no way to know how long is just right. I’ve kept the kernels in for forty-five minutes and had them come out too dry: a waste of precious kernels. I’ve put the same amount in for an hour and had them come out with too much moisture: a waste of precious time.

Eventually, I hit on my go-to method. I pre-pop the kernels in a heavy, metal-bottomed skillet on medium-high heat, shaking the pan constantly until they turn a slightly darker shade of yellow-brown and start to shrink. Then, I put those kernels in a metal bowl to cool while I repeat the process with a new layer of kernels. It takes about an hour to prep five pounds. For me, that’s about two weeks of supply.

The end result is a flavour that explodes and sends me sailing back to my parents’ green plush couch and a Sunday-night movie. I’ve passed the technique on to my kids—more precious, in my view, than any heirloom trinket. If you’re tired of the flat taste of commercial popcorn, you’re welcome to join us.