When did Literary Feuds Become So Boring? | The Walrus
Skip to content 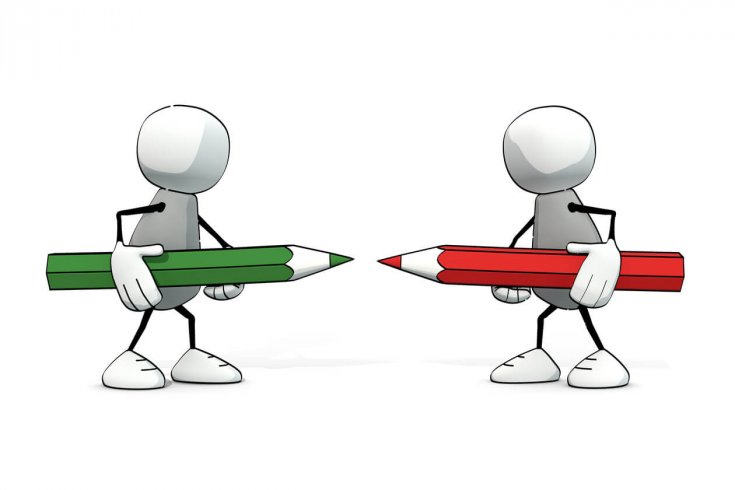 Iam always on the brink of a feud. Publishing an article is like waking up with the dim knowledge of having sent drunk-texts. Retribution is expected. I particularly dread the letters page of the Times Literary Supplement, where no point is too fine, and no Oxford don too preoccupied to make it. I’ve witnessed weeks of impassioned argument about Hamlet’s age, or how best to translate Roman slang.

These are feuds on literary subjects, undertaken in a literary manner, but they don’t rise to the status of “literary feuds,” the subject of so much fascination. A true example of the type requires the participation of at least two literary figures, however that might be defined. Henry Fielding and Samuel Richardson, Vladimir Nabokov and Edmund Wilson, Mary McCarthy and Lillian Hellman—these are legendary clashes often mentioned in the annals of literary feuds. But in truth, an authentic literary feud is an extremely rare event. And considering the way we fight now, they’re virtually extinct.

What transpired between Fielding and Richardson strikes me as an exemplary example. Many see Richardson’s Pamela; or Virtue Rewarded (1740–41) as the first fully-fledged English-language novel. The epistolary tale of a young woman who, kidnapped by a nobleman and held at his estate, exhibits a virtuous resistance to his lecherous advances, Pamela was hugely popular, and widely praised for its moral vision.

Once, it seemed as though a war could be waged for the soul of the English Novel, writ large.

Just a few months after the blockbuster publication of the novel’s second part, Henry Fielding released Shamela, a book purporting to correct “the many notorious Falsehoods and Misrepresentations of a Book called Pamela,” namely by adulterating Richardson’s overbearing moralism. Shamela marked Fielding’s first effort in the novel form, and so it’s no exaggeration to say that he forged his art against Richardson’s example. By the time he released Tom Jones, Fielding was in command of a finely honed moral ambivalence, while Richardson had doubled down on his virtuous style. Richardson’s private reaction to the “coarse-titled” Tom Jones speaks volumes about their divergent aesthetics: “He knows not how to draw a delicate Woman—He has not been accustomed to such Company”.

This is a true literary feud: a serious argument about the nature of literature that takes place actually within the literary medium. There’s no evidence that Fielding and Richardson ever crossed paths; whatever animosity existed between them never boiled over into public view. Instead, it was a battle of the books. Perhaps such a purely literary feud could only transpire at the inception of the English novel as a form, when it seemed as though a war could be waged for the soul of the English Novel, writ large. Now, when wildly various writers comprise a healthy literary ecosystem, confusing the stakes of inter-author competition, no such absolute victories are possible.

Instead, we have authors defending the inches of their turf in hideous bursts. Probably due to how writers confuse the work with the self, the public with the private, the modern authorial clash takes place where the literary shades into the personal. When Colson Whitehead panned Richard Ford’s A Multitude of Sins, he did so in purely literary terms, taking the chance to critique “the method of the Well-Crafted Short Story” at large. But Ford took it badly—very badly. In fact he nursed an increasingly personal grudge for two years, and confronted Whitehead at a party. “I’ve waited two years for this,” he said. “You spat on my book.” And then he spat on Whitehead.

The most vicious episodes in the feud between André Alexis and David Gilmour, which raged for a few years before Gilmour fell on his sword (pardon the pun), had the rare distinction of actually taking place within fiction, with both authors sketching cruel caricatures of each other in their work. Yet this feud was hardly contesting a literary question. It was strictly personal: Gilmour’s picture of Alexis formed a catalogue of bluntly racist tropes, while Alexis supplemented his send-up with a comments-section diatribe against the “self-absorbed, pathologically narcissistic, male chauvinist prick.”

How did we get here? As described at length in Alex Beam’s new book, The Feud: Vladimir Nabokov, Edmund Wilson, and the End of a Beautiful Friendship, the Nabokov/Wilson contretemps transformed the nature of how authors fight, bringing the literary feud into the modern media landscape. Indeed, comparing the feuds of Fielding and Richardson’s time to those of the twentieth century is like comparing a fencing match to blitzkrieg.

When Nabokov reached America in 1940, Edmund Wilson was firmly established as one of the country’s leading critics. He assisted the brilliant Russian émigré by helping him place articles and stories in The New Yorker and The Atlantic, and by connecting him with publishers such as James Laughlin of New Directions, who brought out Nabokov’s first English-language novel, The Real Life of Sebastian Knight (“absolutely enchanting,” Wilson blurbed). The American critic prided himself on his knowledge of Russian language and literature (though his language skills were rudimentary), and he delighted in Nabokov’s singular genius.

“You are one of the very few people in the world whom I keenly miss when I do not see them,” Nabokov wrote to Wilson in 1948. But as Nabokov’s star began to rise, so their beautiful friendship waned. The first blows were dealt by a disagreement over Pasternak’s Doctor Zhivago (Wilson loved it; Nabokov detested it), and over Lolita. “I like it less than anything else of yours that I have read,” an unusually obtuse Wilson wrote to Nabokov. “Nasty subjects may make fine books, but I don’t feel you have got away with this.”

The definitive break came as a result of Nabokov’s translation of Eugene Onegin. A ruthlessly literal translation, Nabokov’s Onegin amounted to 257 pages, but came accompanied with a 930-page “Commentary.” Beam singles out a few of the idiosyncrasies that make the translation so perplexing: “curvate” instead of “curved,” “rememorate” instead of “remember,” not to mention the torturous syntax:

With his un-looked-for apparition,
the momentary softness of his eyes
and odd conduct with Olga,
to the depth of her soul
she’s penetrated.

If Nabokov hadn’t reacted so viciously to criticism of his Onegin, the entire endeavour could be seen as an epic literary satire, a fitting companion piece to Pale Fire. But react he did, and his so-called friend, Edmund Wilson, fired the shot heard ‘round the world. Published in The New York Review of Books, Wilson’s 6,600-word essay trounced everything from the “banal translation” to the “tedious and interminable appendix.” Upon reading the essay, Nabokov wrote to the editor of the Review: “Please reserve space in next issue for my thunder.” It was on.

Wilson poked the bear by asserting that “some of the things [Nabokov] says about the Russian language are inaccurate.” Nabokov took this as an invitation to publicly humiliate Wilson’s “long and hopeless infatuation with the Russian language,” salting the earth by recalling a memory of hearing Wilson read Onegin aloud, “garbling every second word and turning Pushkin’s iambic line into a kind of spastic anapest with a lot of jaw-twisting haws and rather endearing little barks.”

What made the feud transformational was the unique way in which the media was manipulated in its service. Leave it to Nabokov to recognize how the twentieth-century feud would transpire in an endlessly shifting hall of mirrors. The quarrel rapidly spilled over the border into other publications, with Nabokov publishing responses in magazines and newspapers, and forcing Wilson to fight on multiple fronts. Foreshadowing the asymmetrical warfare of a social media feud, writers flooded letters pages everywhere, creating a cacophony of opinion, to Nabokov’s delight. Indeed, Wilson believed that, using pseudonyms, Nabokov himself composed some of these letters (“he is sometimes at a loss to amuse himself”). The author of Pnin basically trolled the world of literature.

Nabokov keenly sensed how the modern feud was essentially a media game, the victor determined by who best manipulates an optical illusion. The insight was prescient. For the remainder of the twentieth century, literary feuds took to the airwaves. The Dick Cavett Show was a preferred venue. That’s where Norman Mailer squared off against Gore Vidal, calling him “absolutely without character or moral foundation or even intellectual substance.” Mailer/Vidal has been called one of the great literary feuds, but watching the footage, it’s hard to see anything but personal hostility finding a literary excuse for expression. Indeed, in a 1975 letter, Mailer said as much: “I have decided to take no more literary cracks at him, I’d rather have the anger stored in my muscle.”

Also under Cavett’s affable supervision, Mary McCarthy verbally socked Lillian Hellman. Asked by Cavett whether contemporary writers were overrated, McCarthy singled out the “holdover” Hellman, saying “every word she writes is a lie, including ‘and’ and ‘the.'” The author of three acclaimed memoirs, Hellman sued the novelist and critic for libel, though Hellman’s death by heart attack prevented the case from ever being heard. It’s pretty good television, yet again, there’s a hollowness to the “literary” part of this feud. As in the Nabokov/Wilson imbroglio, there’s probably some more psychological basis for the animosity, something stored in the muscle but masquerading in literary trappings.

The story of the modern feud is one of authors getting further and further from the page. Television first changed the very medium in which writers clashed. Literary figures offered audiences an image of the author as impassioned, opinionated talking head, channeling petty personal animus. Now social media has initiated yet another change, making feuds more abundant and even more fragmented, the arguments never so vehement, and yet never so disjointed. Actual literary feuds have become about as common as an old-fashioned duel. I can’t recall the last time I saw writers get as exercised over a literary question as they do about the latest column by Margaret Wente.

Yet it strikes me as a warning that so few of the great feuders of the twentieth century are actually read anymore. Vidal is now vastly more famous for his on-screen debates than he is as the author of The City and the Pillar. I know very few readers of McCarthy’s The Group, and even fewer of Hellman’s memoirs. Have you ever read a book by Edmund Wilson? The real contest is against literary oblivion. To pick up the pen is to feud with the indifference of time. No one survives on moral victories alone.

Michael LaPointe ((@MWLaPointe) has written literary criticism for The Atlantic, The Paris Review, and The Los Angeles Review.