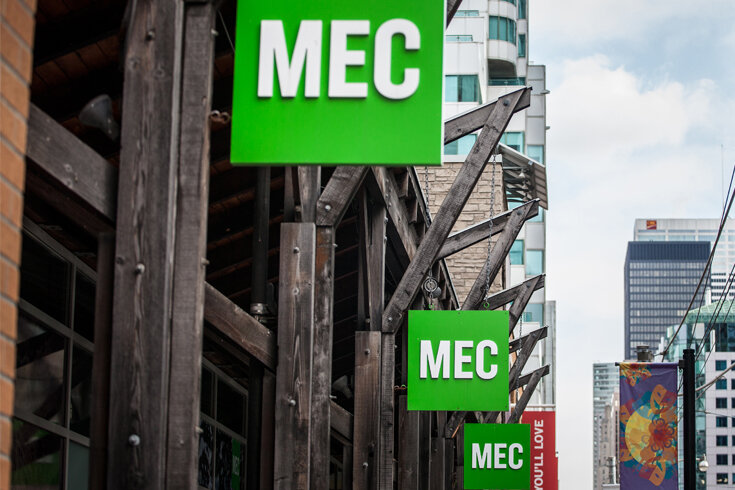 Thousands of Canadian businesses closed their doors for good in 2020, during the first wave of the pandemic, but few commercial casualties attracted more attention than MEC, the popular Vancouver-based retailer that sold outdoor-recreation gear. Canadian Running Magazine described MEC’s sale last September to a US private-equity firm as the “death of an ideal,” and numerous reports used language more fitting for the passing of a close relative. A “Save MEC” campaign sprang up, attracting more than 140,000 signatures as of October. In the end, none of that was enough.

Postmortems started quickly, with some zeroing in on MEC’s business model. The company, founded in 1971 as Mountain Equipment Co-op, may have dropped that last word from its rebranding in 2012, but it was still technically operating as a co-operative until the sale. Unlike a conventional business, a co-operative is owned and managed by members, who set policies and make decisions. In Canada, co-operatives do everything from selling groceries (Calgary Co-op) to providing financial services (the Desjardins Group) to helping dairy farmers market their products (Gay Lea Foods). And, unlike at a conventional business, maximizing profits isn’t the primary goal. Instead, the focus is usually on building a sustainable enterprise that can provide long-term jobs. A workplace that fosters fairness and equality is something else co-ops take seriously. Profits are either reinvested in the company or returned to members. “If making money is the point of what you’re doing,” says Sonja Novkovic, the academic director of the International Centre for Co-operative Management at Saint Mary’s University, in Halifax, “then a co-op isn’t the right kind of model for you.”

But is the model fatally flawed? Unfairly or not, as one of the country’s largest co-operatives—at the time of its sale, it boasted over 5 million members—MEC’s failure has raised uncomfortable questions about whether the retailer’s co-op ethic played a role in its demise. In an October op-ed, Lululemon founder Chip Wilson called MEC a “socialist regime” and alleged the company was done in by inflated wages, tolerance for inferior work, and employees kept around, in large part, because of diversity quotas. These missteps, he argued, added up to “a recipe for competitive failure.”

Co-op adherents don’t buy this argument. “When a corporation goes down, nobody is asking, ‘Is the model a problem?’” Novkovic says. For her part, she puts the blame squarely on MEC’s leadership. “It’s just bad governance. That’s all there is to it.” To Novkovic’s point, what hurt MEC was a decision to transform into a more conventional corporate entity to better compete against other Canadian outdoor retailers and, especially, online giants like Amazon. In addition to changing its name in 2012, MEC added 1,400 new products and invested in splashy new headquarters. The changes, however, went deeper. In a recent piece published in The Conversation, Marc-André Pigeon, a public-policy professor at the University of Saskatchewan, argued that MEC also “built a leadership team that lacked any obvious understanding of co-operatives and fostered a culture that started to see member involvement as a problem rather than a strength.” In short, MEC was trying to cut itself loose from its co-operative identity.

A consumer co-op’s biggest advantage is its refusal to play by traditional corporate rules. Co-ops not only keep more money in the communities where they are active, they create a more direct link between labour and capital that isn’t always present in privately held businesses. That link is increasingly important at a time when large corporations in Canada keep outsourcing work (and wealth) to other parts of the world. So it’s no surprise that co-ops tend to attract consumers who understand they have an inherent stake in the model’s success. But MEC appeared to forget this in its scramble to scale up. And the less consumers understood what kind of business the retailer was, the less willing they were to favour it over competitors. In other words, being a co-op wasn’t how MEC ended up losing its competitive edge—forgetting that fact was the problem.

“One of the things that generally sustains a co-op is a feeling that it is a part of one’s community,” says Jon Steinman, the author of Grocery Story: The Promise of Food Co-ops in the Age of Grocery Giants. “And what can happen with a lot of co-ops, especially the ones that become more like a chain, is that those individual locations feel less like the community.” Of course, there are co-ops that have thrived without jeopardizing their connections to the communities that sustain them. One example would be Vancity, a bank that today operates dozens of branches across Metro Vancouver and BC’s south coast. But commitment to the co-op model remains a challenge for those who believe in its social and economic importance. “In every sector,” Steinman says, “co-ops consistently have the same conversation: How do we communicate, to our owners and to our customers and to politicians, what sets us apart?” MEC’s failure won’t make it any easier to tell that story effectively.

MEC was, of course, far from the only co-operative business in Canada. There are an estimated 31.8 million memberships belonging to a range of co-operatives in areas that include banking, insurance, and agriculture (a membership, it should be said, may include more than one individual). Together, the sector accounts for approximately 3 percent of Canada’s GDP and employs more people than the telecom, auto, or utilities industry.

But this would be news to most Canadians. According to an October 2019 poll conducted by Abacus Research, only 10 percent of Canadians said they were “very familiar” with the co-operative business model, with another 37 percent saying they were “pretty familiar.” For example, while the Desjardins Group is the largest financial institution in Quebec, only half of the province’s residents who were polled knew it was a co-operative. What is frustrating about this lack of awareness of the nature and function of co-ops is that it’s happening at a time when Canadians are sensitive to the role that local businesses play in their communities and the risks associated with losing them. According to same Abacus Research poll, 57 percent of Canadians have what they describe as a “deep connection” to things like buying local and the need to give workers a say in how their workplace is run and a direct stake in its success—all things that the co-operative sector is well placed to respond to. “There’s great interest, especially among younger people, in these alternative forms,” says The Co-operators’ Chad Park.

This renewed attention to the importance of community and local ownership isn’t the only trend tilting the table in favour of co-operatives. In 2019, the World Economic Forum released the Davos Manifesto, which argued that the purpose of a company isn’t simply to make money but to “engage all its stakeholders in shared and sustained value creation.” That vision echoed the one that was articulated about four months earlier, in a revised “Statement on the Purpose of a Corporation” put out by Business Roundtable, one of America’s most powerful business groups. Tricia Griffith, the president and CEO of Progressive Corporation, was one of the 181 CEOs who signed off on the new statement. “CEOs work to generate profits and return value to shareholders, but the best-run companies do more,” she said in a press release. “They put the customer first and invest in their employees and communities. In the end, it’s the most promising way to build long-term value.”

That sounds a lot closer to what co-ops do than previous iterations of the Business Roundtable statement, which were more narrowly focused on shareholder interests and outcomes. Novkovic says this rise of so-called “stakeholder capitalism” creates an important opening for co-operatives—if they can seize the moment. “This is an opportunity for the co-op movement to stand up and say, ‘That’s what we’ve been doing all along. That’s what we’re all about.’”

Along with investing in themselves, co-operatives have to do a better job of sharing the understanding that they can invest in one another. MEC, which lost $23.5 million on $462 million in sales in 2018/19, could have turned to the broader co-op family for the capital it needed to keep its business afloat rather than seeking refuge in bankruptcy. The fact that it didn’t was a key lesson for John Kay, a social entrepreneur and the president of Co-operatives and Mutuals Canada. “When I look through all of the public information, it seems fairly apparent that the MEC board didn’t really have an appreciation or a depth of understanding of the co-operative sector and what the co-operative community can do for itself,” he says. MEC was hardly alone on this front. “There is definitely an advantage in being able to trust and reciprocate,” Novkovic says. “But co-ops don’t do that often enough.”

If the current moment is to serve as an opportunity to expand the use and influence of the co-operative model, co-operatives across the country will have to do a better job of telling their story and explaining why Canadians should be interested. “It’s understood by the people who are well versed in it, and they’re real champions of it,” Park says. “But I think there’s an opportunity, and even need, to expand an awareness and understanding of it beyond that, to circles that might not generally be exposed to it.”

More than anything, Kay says, they have to start fighting for their existence with a sense of urgency that they haven’t before. “We have, quite frankly, rested on our laurels way too much. We believed that everyone knows what a co-operative is, and everyone loves it, and that of course we are such a great thing that nothing could ever happen to us. So we have a hell of a lot of work to do.” For MEC, that fight came too late. But, for other co-operatives in Canada, it could end up saving them—even from themselves.