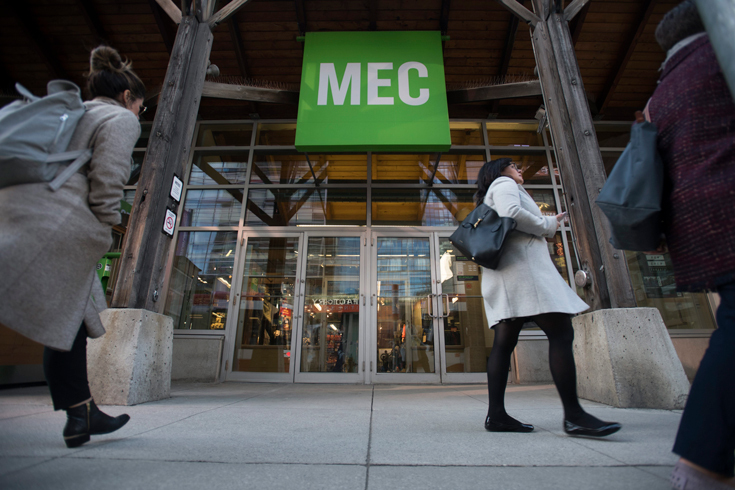 On my very first day of grade one, I carried my lunch and notebook in a green Mountain Equipment Co-op backpack. I still have it. Many years later, my dad took it back to the local retailer because it had a broken zipper. They fixed it for free.

Most patrons have a story like this, about that one piece of Mountain Equipment Co-op gear that just wouldn’t quit. And every adventure I’ve taken since, to my local backcountry or abroad, has involved stocking up at one of its stores. Mountain Equipment Co-op gave me fire and shelter, food and clothing. Most importantly, it gave me confidence. It helped me feel like I could do anything and, more than that, be anyone: a hiker, a paddler, a climber, a cyclist.

Founded in 1971, in Vancouver, by a gaggle of University of British Columbia Varsity Outdoor Club members, Mountain Equipment Co-op was more than just an outdoor person’s candy store: it was a wellspring of affirmation. As a consumer cooperative, it belonged to its customers. For $5, anyone could own a part. The cooperative model kept costs so low that, by its own admission, some manufacturers refused to supply merchandise to the scrappy startup because it didn’t agree to their suggested markups. The retailer appeared out of the mist of the late 1960s, when countercurrent and even subversive concepts found resonance. It wasn’t a cold big-box shopping experience but something more intimate. Knowledge, experience, recommendations, and support were passed down to each individual. The concept spread across the country, with millions joining the cooperative.

In 2013, however, the retailer rebranded. Gone was its half-mountain logo, an identifier every bit as iconic as our flag. Countless times—in Rwanda, in India, in Cuba—I would see that half mountain on a backpacker, know that the bearer was Canadian, and feel, even if fleetingly, a connection. The name Mountain Equipment Co-op was replaced by MEC, white block letters in a green square. The transition was an attempt to break into the urban market: city cycling alongside rock-climbing, laptop bags alongside ice axes. One of its newest stores, in Toronto, is a 35,750-square-foot retail behemoth, a far cry from the co-op’s start: selling goods out of a van.

The bigger MEC became—surpassing the 5 million member mark in 2017, equivalent to about 15 percent of the country—the further it moved away from its founding spirit; it was meant to be not a for-profit company but a cooperative that supported progressive causes with initiatives like The Environment Fund, which it launched in 1987, and the adoption of organic and recycled materials in the 1990s. It’s easier to accept when an Arc’teryx or a Lululemon expands and transforms, moving its manufacturing overseas, for example. But MEC was different. Still, worries circled that it was failing to adapt to a changing, more online market or that its recent expansions were too ambitious. Even its loss of $11.5 million in 2018, noted in a recent financial audit, seemed like a small bump in the road out of $462 million in sales that year. However it might break, it felt like MEC would be able to be repaired.

But, last week, MEC announced that it was being sold to a Los Angeles–based private equity firm called Kingswood Capital Management. “Since our founding in 1971, MEC’s deeply loyal members have been synonymous with who we are and what we do,” the MEC board wrote in a follow-up statement to members. “That will not change. MEC will continue, and our values will be maintained, though it may look a little different.” Store closures are now anticipated, as are layoffs. Most importantly, MEC’s days as a cooperative are over. Any new steps forward will be as a private company, just like all the rest. Many members felt betrayed. A change.org petition calling for the deal’s cancellation garnered more than 100,000 signatures in the few days after the announcement. People want their five bucks back.

My dad was one of MEC’s keen first members, and he fondly recalls signing up for the cooperative in 1975. He has voted for board members and received dividend cheques in the mail. For decades, he proudly carried his paper membership card around in his wallet, eventually having it laminated to protect it forever. Every time a MEC cashier would ask for his phone number, he would instead hand over his old card and watch their eyes go wide as they realized he was one of the original thousand. He was there at the beginning, buying a pair of leather Galibier alpine climbing boots, at the Vancouver store in 1976, that now hang by their laces from a beam in my parents’ mud room. He bought two metal ice axes there, for his climbs in the Bugaboo Mountains, that are now displayed, crossed like a heraldic crest, in my parents’ garage. His aluminum flip-top water bottles, dented from hundreds of excursions, have been passed down to us kids.

That’s how it was and how it used to be. A place of quality, a place of connection. You would go there to buy one thing but end up leaving with ten—and a plan. Need a plastic container to safely carry eggs two days into the Algonquin backcountry? Check. Need wool socks, a shell jacket, and insulated pants for a ski-touring expedition in the Coast Mountains? Check. Want to eat freeze-dried lasagna and crème brûlée for dinner while backpacking in Thailand? Just add water, and check. But MEC has never been just a place to kit yourself out in gear. We were part of something—less haughty than a collective, more inclusive than a club. It was a shared space that brought down the mountain tops, turned day hikes into week-long trips, and made the unreachable feel reachable.

I don’t know what’s in store for the future of MEC, but I can’t say I’m hopeful. It’s not necessarily the end of a retailer, but it sure is the end of a concept. First it lost the mountain from its brand. Now it has lost the co-op from its spirit. All that’s left is equipment.