What Americans Can Learn from Assad | The Walrus
Skip to content 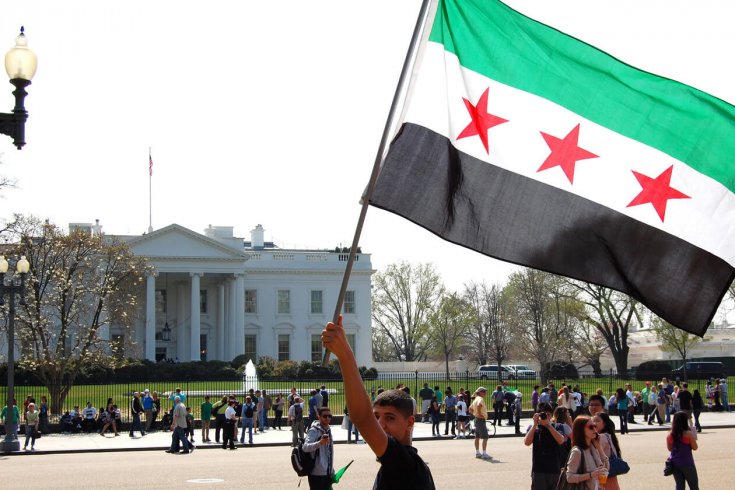 The last time I visited Syria, it was March 2011, two weeks after the country’s first protesters began calling for political reform. I’d watched the Arab Spring take down dictators in Tunisia and Egypt, but never imagined my compatriots might follow suit.

I’d said as much to friends and classmates in Ottawa while protests in Egypt’s Tahrir Square were gaining momentum earlier in January, explaining bitterly that Syrians just didn’t do civil unrest. After decades of living under dictatorship, we were too fearful and apathetic. Growing up, the only rallies I ever witnessed were pro-government marches; citizens hardly dared utter the president’s name in public except in praise, and even the mildest criticism or political satire could lead to a jail sentence. To protest was suicide.

That’s why, on the Friday afternoon that I first saw television reports of Syrians taking to the streets, I stopped still. The volume was too low to hear the voice-over, but I didn’t bother to look for the remote. The image alone was stunning. Was this the turning point I’d been waiting for my whole life?

In Syria, textbooks were heavily censored, filled with propaganda texts, and often out of date. Critical thinking was discouraged. In an autocratic state, that’s no accident.

But after arriving in Homs, I learned the demonstrations were a lie. Or so said the young woman who cornered me at an engagement party one night and asked whether I believed the garbage I saw on television. I hardly knew her—she was a friend of a friend—and wasn’t sure why she’d singled me out. Perhaps she assumed that since I was visiting from Canada, I’d been brainwashed by the Western media and needed to hear the truth.

She claimed Al Arabiya, a pan-Arab news channel reporting on the protests, had fabricated the uprising. More than once, she told me, when the Dubai-based broadcaster showed live footage of a protest in Syria, she would call friends and family where it was reportedly taking place. Invariably, they’d tell her that the streets were, as far as they could see, empty. It was all a scheme, she concluded, and it wasn’t just steered by Al Arabiya. There were likely more powerful players involved.

It was no coincidence that the day before, President Bashar al-Assad had delivered a speech in which he, too, vaguely accused news channels and foreign powers with ties to Israel of stirring up trouble. Fake news. Alternative facts.

I flew back to Canada a few days later and watched from afar as the protests grew larger and the Syrian government’s response became increasingly violent. Yet on social media, certain friends and family members echoed variations of the party guest’s narrative. They—in Syria, they usually referred to the United States and/or Israel—were behind the Arab Spring. They felt threatened by our country’s stability, and they wanted to see us fall, too. Our country didn’t need political reform or social progress, the argument went; it just needed to be left alone to look after itself.

I was accustomed to that type of rhetoric. I lived in Syria between the ages of seven and seventeen. Although I went to a private, international school, I had a glimpse of the public school curriculum. Learning was based on rote memorization. Textbooks were heavily censored, filled with propaganda texts, and often out of date. Critical thinking was discouraged. In an autocratic state, that’s no accident.

Now, I can’t help but wonder when Donald Trump will start turning his attention to course curriculums.

Most Syrians I knew didn’t blindly trust their government. Hardly anyone believed, for instance, that Bashar al-Assad won every election with over 99 percent of the vote.

Yet we also rarely sought out verifiable data. The one time I tried to report a story in Damascus, in 2010, I visited the bureau of statistics in search of environmental reports. All the files, I learned, were kept in a dusty, cockroach-infested basement. The staffer who managed them looked shocked when I turned up—it was as though he hadn’t seen another human descend those stairs in years.

The international stage also provided far more spectacle and intrigue than Syria’s internal issues. When bemoaning our country’s lagging economy, it was easier to point fingers at outsiders than, for instance, wonder how Syria’s ongoing drought affected farmers in the northeast. It was more convenient to express outrage at the war in Iraq or flare-ups between Palestinians and Israelis than to acknowledge Syria’s widespread poverty and illiteracy. So it shouldn’t have been a surprise that when some Syrian citizens began demanding their rights, the majority reacted with suspicion.

I tried engaging the doubters on social media. Many of them refused to accept that fellow citizens would dare call for open elections, government accountability, or freedom of expression. We didn’t need those freedoms, they countered; democracy was all a myth anyway. Was I really so naive to think there was transparency, accountability, and freedom of expression in Canada or the US?

I think back to those exchanges often. I remembered them with some chagrin whenever I complained about the Canadian Conservative government’s muzzling of scientists. I thought of them in 2013 when Edward Snowden became a household name after leaking classified information about the National Security Agency’s surveillance programs, even joking to friends that I was used to having government agents listen in on all my calls. In Syria, it was common practice and common knowledge.

I remembered them two months ago, when Syrian government forces took control of East Aleppo after months of siege and airstrikes. While trusted news outlets in the West reported on the city’s destruction and its residents’ pleas for help, Syrian and Russian news showed celebrations in West Aleppo, with crowds chanting in support of Assad.

Naturally, I think of it now, as the new US administration claims millions of illegal voters marred election results and attempts to remove years’ worth of climate research from public access. Paranoia reigns as the man who, for years, questioned Barack Obama’s citizenship is signing executive orders to ban Syrian refugees, round up illegal immigrants, and build a wall on the border with Mexico.

It’s easy to draw parallels between President Donald Trump and a reviled dictator. But the more frightening prospect is that, once the thrill of the initial wave of resistance subsides, Americans will adapt to the new norm in which, among other developments, climate data is taboo, the president can’t take criticism, statistics are irrelevant, and the legitimacy of the election process is cast into doubt.

The Assad regime had largely drained Syria of facts and intelligent analysis. Any reports that painted the country or its government in a negative light were forbidden, which left us citizens with very little to interpret. We filled the vacuum with mindless conspiracy theories. We allowed spectacle to blind us to our real problems.

Several friends have pointed out that it’s only Trump’s first week in office, and they’re already exhausted. “How are we going to take four years of this?” they wonder. My advice: scepticism—whether of government communications or independent news reports—is healthy. But paranoia is paralyzing.