How Trump Conquered the Christian Right | The Walrus
Skip to content 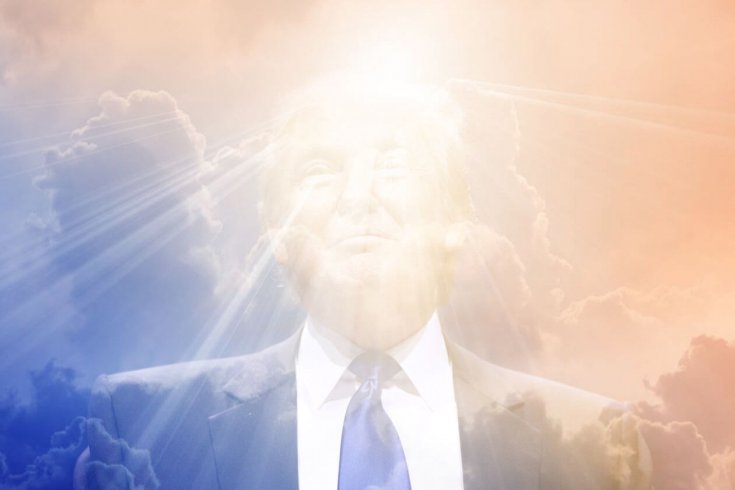 Donald Trump has just enacted some of the most draconian and oppressive visa, immigration, and refugee policies in US history. As well as being an affront to American values, it is also offensive to the Biblical values that many Republicans claim to take as their inspiration: the Bible, in both the Old and New Testaments, is drenched in calls for the foreigner and stranger to be welcomed. Yet at the very moment these orders were on the president’s desk, tens of thousands of Christians at Washington’s March for Life were cheering at every mention of the Trump government. His popularity among right-wing evangelicals and Catholics is reportedly higher than ever.

It’s difficult to recall now, but not so long ago Donald Trump was regarded by the Christian right as an enemy of the Almighty. And nobody knows who belongs on the Almighty’s naughty list as thoroughly as the Christian right. Trump supported abortion rights and same-sex marriage. He had been married three times, used profane language and seemed to have no problems whatsoever with the moral decay of God’s chosen United States of America.

Yet, in November, white evangelicals voted for the man in overwhelming numbers. Conservative Catholics called him “the new Constantine,” after the first Christian Emperor of the Roman world, and various Baptists and Pentecostal ministers battled for the right to preach at his inauguration. Among the winners were the grotesquely homophobic Franklin Graham, who is paid $800,000 a year by his “charity”, and Robert Jeffress, who said that gays lived “filthy and miserable” lives and once accused Barack Obama of “paving the way” for the anti-Christ.

So to what do we attribute the evangelical mind’s great epiphany, its political conversion on the road to Damascus? Answering that requires some distinctions. The largest Christian church is, of course, Roman Catholic. Protestantism is divided into a number of denominations but broadly we can split the Christian faith that broke from Catholicism in the sixteenth-century as conservative and liberal. Liberal Protestants, such as Anglicans, United and United Methodist, many Lutherans and Presbyterians, see faith as far more of a living, unfolding relationship. Which led most liberal Protestants—as well as most black evangelicals, for that matter—to oppose Trump. Catholics were split, as is usually the case. Conservatives, however, are largely evangelical, believing in the literal truth of Scripture and a strict interpretation of God’s word.

But none of this fully explains Trump’s almost complete and extraordinarily swift seduction of these right-wing Christians. That’s because their vote had nothing to do with doctrinal beliefs, but with the political and moral fetishes the group has nursed over the past half-a-century. To put it bluntly, the Christian right has a strange and quite non-Biblical obsession with what other people do with their genitalia.

Scripture never specifically mentions abortion, the Old Testament never refers to lesbianism, and the entire Bible brings up homosexuality—the word didn’t exist in the ancient world—only a handful of times and, even then, enigmatically. In fact, many theologians are convinced that there are Scripture passages that actually support same-sex relationships.

Yet evangelical Christians, especially in North America, have made abortion and gay marriage the prism of their faith. A person is defined not by belief in God, commitment to neighbours or acts of forgiveness and charity, but by a determined opposition to these “great sins” of modernity. Throw in euthanasia, pornography, the belief that human-made climate change is a Marxist canard, and the idea that Muslims hate Jesus and the menu is complete.

Trump doesn’t say much about euthanasia but he has certainly played the Islamophobic card. He has also suddenly become profoundly pro-life, even suggesting during the campaign that women who have abortions should be punished. He later backtracked on this, but anti-abortion blogs were full of praise for a man who they saw as brave enough to speak truth to liberal power.

On the gay issue, Trump found it far more difficult to perform a volte-face because of his many statements of support or indifference on the subject, so he surrounded himself with activists who were proudly anti-gay and could “interpret” the leader to the masses. Oh, how eager to grasp that interpretation the masses were!

Even the more skeptical right-wing Christians who don’t buy Trump’s new persona, know that he will likely appoint conservative judges to the Supreme Court, and in some ways that’s more important to them than having a comrade in The Oval Office. Ultimately they want abortion to be overturned, equal marriage to be reversed and so-called protection of religion legislation to be passed, allowing Christians to discriminate against gay men and women in any number of ways. That will be a difficult, and sometimes impossible task even for the Supreme Court, but they will likely try. Remember, within three days of becoming president, Trump removed funding from any aid organization providing abortion education or facilities abroad. It was one of the first things he did.

One of the ironies of all this is that President Obama is actually a man of deep Christian faith. Obama desperately wanted to reduce abortion rates, especially in the inner city black community, and hoped to achieve this by making contraceptives readily available, providing good and modern sex education, empowering women and working to reduce poverty. Those policies have been staggeringly successful elsewhere, but the Christian right opposes sex education, have major concerns about contraceptives and often stands against gender equality.

As for Trump’s personal life, the denial from his Christian friends is remarkable even by fake news standards. While Jesus doesn’t mention homosexuality, he is not a fan of divorce, and twice divorced is even worse. No matter, apparently. Trump’s attitudes towards women, sex and morality were similarly dismissed. “We’re electing a president, not a minister” was the rallying cry. Yet these are the very people who demand dismissal and worse whenever a liberal or Democrat—Bill Clinton being a good example—gets into any trouble in that area.

We see some of that duplicity in Canada but what makes American evangelicalism different is its grasp of exceptionalism. It permeates much of American life, of course, but when mingled with ideas of predestination and being God’s chosen, debate will not be tolerated. Thus the sweaty handshake between moral conservatism and hawkish foreign policy, gun ownership and severe criminal justice. Not quite the mercy, love and forgiveness Jesus preached, but it’s iron in the soul for the tens of millions of evangelicals who not only vote but work hard for their causes and leaders.

In other countries, the church operates by different principles. William Temple was Archbishop of Canterbury in the 1940s. In other words, he was one of the world’s most important Christians at a time of international crisis. He wrote that, “Socialism is the economic realization of the Christian gospel.” He would be kicked out of most American evangelical churches today. Tommy Douglas, whose social activism led to the creation of Canada’s medicare, was a Christian minister; William Wilberforce, the great opponent of slavery, was a passionate Christian. The American Christian experience is not unknown elsewhere, but nowhere else is it as pronounced and powerful— to the extent that being Christian has, alas, become a byword for intolerance.

Christianity, however, is based on paradox. God on a cross, the powerful losing, the powerless tasting victory. As dreadful and painful as the Trump Christian experience may be, it has obliged some younger and thoughtful evangelical Christians to question their church. These people are growing up with gay friends, know people who have had abortions, accept climate change as a self-evident fact, and manage to reconcile all of this with a God of love, grace, gentleness, and change. If the left can listen to them and if some meeting point can be found, there is a chance—though an admittedly distant one—that we could see a different voting pattern in an election or two.

In the meantime, Trump has grabbed conservative Christians by the, well, the neck. Whether he is dragging them towards his New Jerusalem remains to be seen.