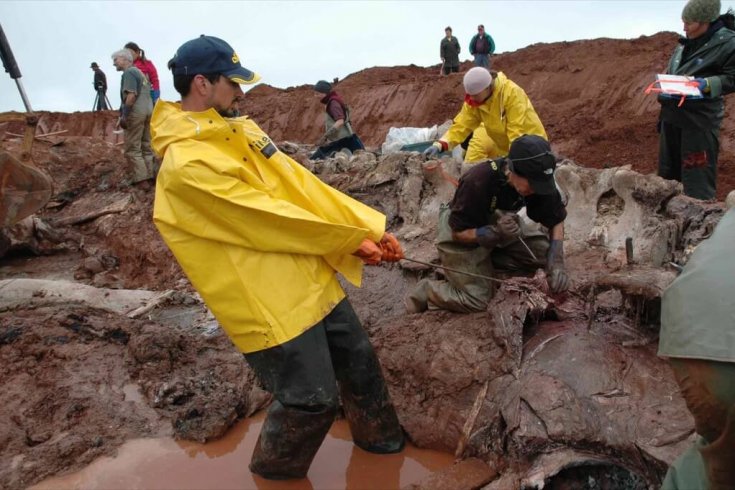 In a large container, combine water, bones, and lipase. Heat to 50°C with continuous mixing for one week, or until oil floating to the top becomes less evident. Cool the mixture to 37°C,and add bacillus and accelerator. Stew at 37°C for several months.

One might assume the above to be a peculiar soup recipe, and for an extremely large party at that. But it is actually a formula for a most unusual science experiment happening in a warehouse on the pier in Victoria, British Columbia. Balaenoptera musculus is the Latin name for the blue whale, the largest animal ever to have existed on the planet. One specimen’s bones can be found in the warehouse—an array of massive vertebrae, mandibles, ribs, and flipper bones carefully arranged on the floor, with hundreds of smaller fragments placed on crowded racks nearby. There is also an unpleasant smell in the air.

The experiment is an attempt to degrease these giant bones, so that an entire blue whale skeleton can be reassembled without fear of it becoming rancid and discoloured over time. This, apparently, is not easy to do. Marine mammal physiology is such that whale skeletons are saturated with oil, making them buoyant and useful as an energy storage unit, but also prone to decomposition. It also doesn’t help that some of these oily bones are almost as heavy as a small car.

From “A Whale-Hunt in the Varanger Fjord,” Chambers’s Journal of Popular Literature, Science and Arts, 1886

During the last quarter of an hour we have seen some forty whales; but none has come within range. The gun has no certainty much beyond thirty yards, so that the whale must be nearly under the ship’s bow when firing. As we stand looking at this magnificent spectacle, the water close round the ship suddenly becomes light green in colour and somewhat calm. Then a deep heavy thunder; the ship trembles from stem to stern; a great column of dampness is shot into the air, drenching us all, a dull snort, and an enormous blue whale rises out of the sea a few yards on our starboard side. Now the captain will fire, we think, involuntarily holding on to the wire rigging; but Foyn stands by his gun without making the least movement, and the next second the whale again descends into its watery home.

I’m lucky. On the day I visit, the soup is not brewing, and I’m told that the smell is much more tolerable now. I’m also here on a day when there are twenty or so six-year-olds, a school field trip, who have come to gaze upon a rib cage that happens to be large enough to house their entire class, their teacher, and maybe a few of the cars that brought them here as well. Today these children will learn that there is such a thing as a “master skeleton articulator.”

Mike deRoos quietly chuckles at this job title. “Master? ” he muses. “I guess you might call me that, especially when there are so few people in the world who actually do this, but really there’s no official title for this type of work.” DeRoos and his wife, Michiru, are the individuals primarily responsible for getting this skeleton ready and assembled, hopefully by early 2010, so that it can be displayed at the University of British Columbia’s Beaty Biodiversity Museum, a new facility designed to showcase this icon of biodiversity as well as more than two million other specimens the university has collected over the years.

How a whale goes from living, breathing organism to marquee museum exhibit turns out to be an exercise in twists and turns. Washed up dead but intact near Tignish, Prince Edward Island, in 1987, the eighty-five-foot blue whale became the talk of the town. (After all, it’s not every day that one can see a real-life leviathan, let alone stand on one.) Wildlife pathologist Pierre-Yves Daoust was summoned to examine the huge carcass, a daunting experience: not only was he just a month into his new professorship at the University of PEI’s Atlantic Veterinary College, but he was also fresh from the prairies, a habitat not particularly known for large aquatic animals. When I ask him about his first impressions of the whale, he says it was a rather “big awakening” to the nuances of island work, but is quick to add that he has “never been intimidated by large animals.” With the help of many local volunteers, Daoust performed the necropsy, and the PEI Department of Fisheries arranged for the burial. And then the whale was forgotten, more or less, save for the stories and a hastily drawn map depicting the burial site.

It wasn’t until twenty years later that Andrew Trites, director of UBC’s marine mammal research unit, found himself uttering the phrase “Bet I could find a blue whale skeleton.” This was actually just a casual suggestion for an architectural addition to the new museum, but he was pleased when his colleagues saw educational merit in such an acquisition. He eventually learned of the Tignish whale while joking with a curator at the Canadian Museum of Nature. “You don’t by chance have an extra blue whale around? ” To which he received the reply, “As a matter of fact… ”

In the winter of 2007, Trites, deRoos, and deRoos’s dad went in search of the buried whale. Armed only with the hand-drawn map and aided by a digger (whose operator turned out to be the son of the man who had buried the whale twenty years earlier), they intended to do a preliminary dig and assess the situation. Expecting clean white bones, they were surprised when they hit whale and found it still as blue as blue can be. Apparently, the whale had changed little in the somewhat cold and sterile environment of the island’s red clay dirt.

“I went back to the motel that night, and I remember having a panic attack about what I had gotten myself into,” Trites explains. “But the next morning when Pierre-Yves and his group came out, relishing the chance to examine the whale and practically running to the pit with knives in their teeth, I realized that with that kind of enthusiasm this wasn’t something that just I, Mike, and his dad would have to do alone.”

In May 2008, in the presence of two excavators, some makeshift shelters, and a full crew of helpers, efforts to liberate the carcass and its prized skeleton began in earnest. In total, it would take ten days to dig out the entire beast, deflesh the specimen, and rebury the flesh, a messy and pungent process greatly aided by Daoust’s anatomical know-how, and by two volunteers dedicated to continually sharpening the carving knives.

It was during this process that a possible cause of the whale’s death was determined. The left side of its skull was severely damaged, indicating a likely vessel strike—a hit and run on the high seas.

Back in the warehouse, deRoos is regaling the six-year-olds with tales about the blue whale, how it is a truly massive creature that weighs more than any dinosaur that roamed the earth, how a baby could crawl through its arteries, how it makes the loudest sound of any creature in the world, and how its population was once nearly destroyed before it became a fully protected species in 1966. The kids look suitably awestruck.

This is the response everyone hopes to see when the job is finished. “The whale is a focal point to talk about the loss of biodiversity and the importance of conservation. It will stir emotions in people,” Trites tells me. “We talk about the museum, with all of its specimens, being like a library of life. And the blue whale is going to be our librarian.”