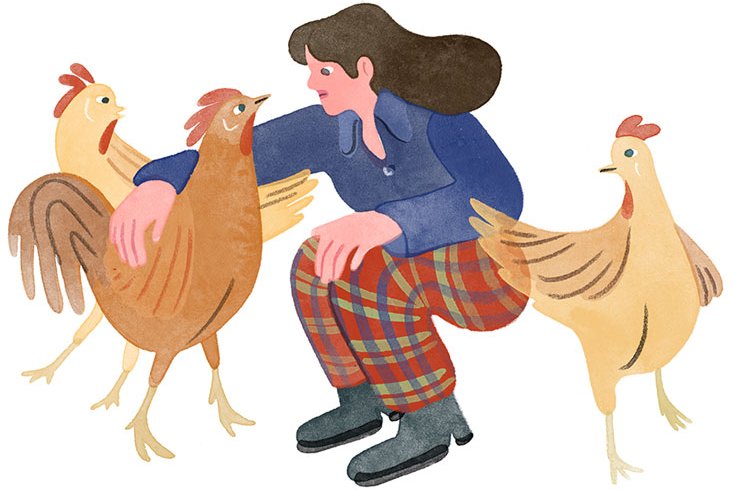 I’d do anything for love. My boyfriend, Shon, bought a shotgun house in Princeton, BC, on the traditional territory of the Upper Similkameen people. I’m learning to love the small town, roughly four hours by car from Vancouver Island, where I live. I’m learning to see beauty in the old copper mine and the abandoned cabins that stand in waist-high weeds, though I’ve always had more of an affinity for cities. Concrete. Hard, even surfaces that leave nothing to the imagination.

When I visit Shon, he gives me pointers on catching frogs and grins when I plop one into the bucket with my bare hands.

He has a penchant for unusual pets. “Chickens,” he said one day. By then, we’d co-parented four crows, a water beetle, and a Rocky Mountain wood tick we kept in a pill bottle. He asked if I had seen the photos he’d sent me. “They’re so cute. You’re going to love them.”

We returned to his place late one afternoon with the first two chicks in a thrift store cage. I named them Eyeliner and Crybaby because Eyeliner looked made up and Crybaby’s black markings reminded me of tear-drop tattoos. Shon’s idea of a joke was to name the third Drumstick, the fourth Satan, and the next three after world dictators.

As with alcohol, when it comes to chickens, it can be hard to know when to stop. The next twenty birds, acquired over the following weeks, didn’t have names. They never would get names.

The yard was soon a mess of uprooted bean plants and trampled peas. The backyard pond, once crystal clear, was now murky and empty of frogs, which had been swallowed whole by another of Shon’s additions, two mandarin ducks.

Princeton is a down-to-earth town: people live and let live, but everyone draws the line somewhere. A zoning bylaw draws it at roosters. We were shocked awake one morning by cock-a-doodle-doos. We thought—had been conned into thinking—we’d bought only hens.

We stared at our two dozen dilemmas as they ripped apart the tomato bed. We couldn’t keep them but also couldn’t rehouse them.

“I’m too hungry to think,” I said. The words left my mouth unironically, yet here I was, knee-deep in chickens, wondering what to make for lunch.

Suddenly, our plan was as clear as the pond had once been.

That afternoon, we gathered what we’d need for the task ahead. Armed with YouTube instruction, we set a table out in the yard. We found a garbage can lid in which to collect the blood. String with which to hang. A large white sheet, which we spread over the grass by the burn pit. Next to that, a pot of freshly boiled water. Everything was ready as Shon grabbed the first victim, Satan. Despite my misgivings—thinking soothing thoughts about the things we do for love—I held down the squawking bird while he beheaded it. Next came Mao, then Stalin, and later those without names, each tied upside down by their feet afterward, to the lowest branch of a small hazel tree.

Shon looked at his favourite, the rooster with the most stunning plumage, whom he’d at one point talked about keeping in a cage in his Vancouver apartment.

“You want the honours?” I asked.

I didn’t look into the bird’s eyes, only at a precise spot on his neck. I decapitated the rooster as swiftly and efficiently as I could. Otherwise I might have ended up like Shon, who met the rooster’s gaze and later lamented, “Did you see the way he looked at me?”

We plunged them into the water and brought them to the sheet, where we sat cross-legged in the sun and plucked. After we had cleaned and butchered the birds, I packaged the meat—minus that night’s dinner—and, not without some satisfaction, which I imagined every homesteader must feel, placed the packages side by side in the deep-freeze.

Now, when I think back on that day, defrosting a leg or a breast in the sink, I wonder: Had I betrayed the trust of birds who saw me as their human friend? Should there have been love there too? But balance requires counterbalance, and not all love weighs equally. What we do for love is not always loving. The scales are constantly in flux.

Yasuko Thanh is a novelist and short story writer based in BC. Her bestselling memoir, Mistakes to Run With, was published last year.
Tallulah Fontaine