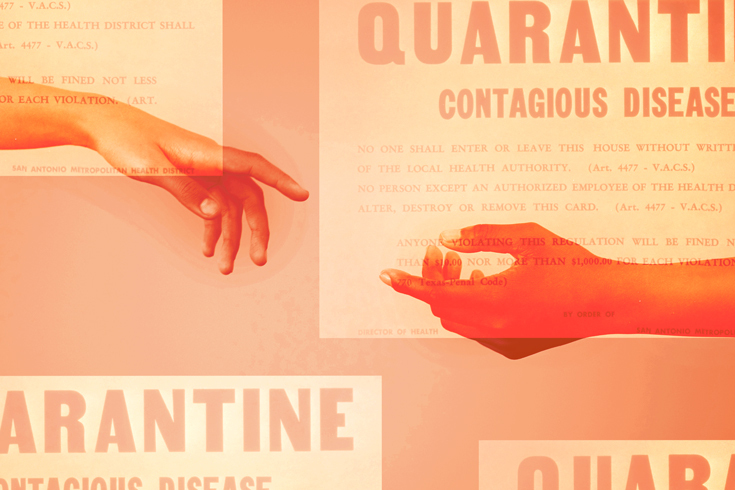 The tickets were purchased months ago—before Italy confined its 60 million citizens, before India ordered the country’s 1.3 billion people to stay home, before America closed air travel from Europe, before the NBA cancelled its season, before our own prime minister’s wife got sick with a deadly pathogen from a trip abroad. Back in December, my mother wanted to take me and my sister to Romeo and Juliet, a ballet about the doomed Italian couple who have to quarantine themselves from each other and that most deadly of fomites, the heart.

Our tickets were for the March 12 matinee. We debated not going, that maybe it was dangerous or irresponsible. There was growing talk of the need for social isolation. But, as the coronavirus closed in, I didn’t know when I would be able to go out with everyone again, the people I loved and strangers, to enjoy something beautiful. On the afternoon of the show, I walked along Queen Street in Toronto to the Four Seasons Centre. Life was still going on, bars and restaurants were open and busy. But, already, cracks had emerged. I stopped into every convenience store and pharmacy on the way, looking for hand sanitizer. Shelves were empty. My best friend texted me a photo of gridlocked shoppers in a grocery store, carts heaping, inching toward the checkout.

The Four Seasons Centre lobby was packed with people, mostly elderly. There was a little boy, maybe eleven, dressed in a tuxedo and bow tie. I never saw him with his parents—he just stood there alone, looking mischievous and pleased, precocious and debonair. The sun came out and poured light through the glass atrium. The bar was shoulder to shoulder, like it was last call on the Titanic. A bell rang us to our places, and I shuffled past a cuddling old couple. There were empty seats in the rows in front, giving us an unobstructed view of the stage. “Look how many people cancelled,” my mother said with bravado and fear.

My sister leaned over to me. “You were born for this moment,” she whispered. When I was about the same age as the boy in the tuxedo, I was obsessed with two things: the movie Outbreak and Shakespeare’s Romeo and Juliet. Outbreak was about the danger of people being together, and Romeo and Juliet was about the perils of being apart. Outbreak scared the shit out of me as a kid—it’s a fictional imagining of what an Ebola-like virus would do to a small town in America. The virus decimates a single town, which in this moment of global crisis makes the film seem sort of quaint. I had already been a hypochondriac, but after learning human contact could be so calamitous, I retreated into the socially distanced world of reading. One of the first books I bought on my own was a Collins Classics edition of The Complete Works of William Shakespeare: The Alexander Text. I’ve still got my copy. On page 950, there begins Romeo and Juliet, held together with Scotch tape and madly underlined in pencil. I was in love with Romeo’s refusal to be separated from Juliet, and almost every line of his feels sharper at a time when the pandemic appears to be severing every link between one human being and another. “For stony limits cannot hold love out; / And what love can do, that dares love attempt. / Therefor thy kinsmen are no stop to me.”

Pestilence bookended Shakespeare’s life. The plague ravaged his town when he was born, on Henley Street, in Stratford-upon-Avon, snatching up the lives of other children but sparing him. In the last decade of his life, he likely wrote his greatest masterpiece, King Lear, while locked down during another wave of infection. In between—at a time when theatres in England were one of the major vectors of transmission—he romanced huge crowds of people into coming together, cheek to jowl. Plagues also stalk his plots. An outbreak, after all, is what kills Romeo and Juliet. Yes, they commit suicide because they can’t be together, but the plague is what truly does them in. More specifically, the postal supply chain breaks down, and the “star-cross’d lovers” are fatally undone by a misapprehension.

You’ll recall what happens: Romeo and Juliet are married in secret by Friar Laurence, then Romeo is banished for killing Juliet’s cousin. Later, Friar Laurence and Juliet make a plan: he’ll give her a potion that will make her sleep for many days, and she’ll appear dead while she waits in her tomb for Romeo. Friar Lawrence will send a messenger, Friar John, to deliver a letter to Romeo explaining the plan. But the letter never shows up because Friar John is suddenly quarantined.

The house went dark and quiet, and the curtain rose on a magnificent scene: an early Renaissance Italian piazza, utterly empty save for Romeo. The stage looked like one of the many photos of Italy’s now funereal streets. Romeo is soon joined by Benvolio and Mercutio, and the square fills up with music, with dancers holding tight and panting into one another’s faces. Part of me was appalled—Did these wonderfully athletic people not know a dangerous virus was tearing through the world? Were they hand-sanitizing in the wings? We all got a push alert to our phones: the NHL had suspended its season and the MLB had cancelled all spring-training games.

But then came the balcony scene. Romeo and Juliet’s dancing is, above all, a desire for human contact. Their feuding families, even their government, the prince, try to keep them apart, lest the Montague and Capulet clans be infected. But all the best human things are unhygienic—sex, kissing, a touch from the person you love. A plague clarifies things: there’s little more to love than being held.

Juliet’s balcony light flicks on, and Romeo twirls beneath her window. Right before this scene, Juliet’s nurse tries to pull her away from the balcony. But now, the lovers see each other. Juliet kills the lamp and runs downstairs, across the darkened stage. She leaps and Romeo catches her. Taking her by her waist, he hoists her into the air, where she bends like a strand of DNA. They lock hands and spin. They lie down together and get up together. Juliet’s balcony light comes on, calling her home, and she starts to go but then turns and runs back to him again. They can’t bear to say goodbye. She strokes his face. She goes en pointe. The music swells, the spell is cast, and I almost don’t notice when someone beside me coughs. As I cry, I fight the urge to touch my face and wipe the tears away. I just let them fall.

During intermission, we got another push alert: the province was closing all public schools. Two million students would be at home for the next three weeks. My sister didn’t know how she’d take care of her kids and go to work. But none of us panicked. We were in a big beautiful room filled with life. We got a glass of wine, and I watched the kid in the tuxedo standing by himself, smiling as the crowd curled around him. Someone dropped their glasses, and I instinctively rushed to pick them up and hand them back, then realized I needed to wash my hands. It hit me: we weren’t at Romeo and Juliet—we were in it. Society was cracking along Shakespearean fault lines. Act 3, scene 5: “I must be gone and live, or stay and die.”

When the house went dark again, what mattered was how the ballet would end. Everyone clapped as the third act whirled into action, with everything driving toward that final scene, in the crypt, when Juliet has drunk the potion that will make her seem dead then bring her back to life in time for Romeo to find her. But the letter from Friar John never arrives, and when Romeo discovers her lifeless body, he thinks his whole world is over.

What happens next is a sort of public health disaster. Romeo kisses her hands and pulls her off her funerary slab by the ankles, as Juliet pours down like a waterfall. He carries her in his arms, the way King Lear carries Cordelia, and draws her into a pieta. And then, when he decides to drink his poison, he first puts it in Juliet’s hand, then clasps his around hers, and shoots the illness down. In the play, Romeo dies before Juliet arises. But, in the ballet, she wakes up while he’s still alive. They’re here now, with each other. Together briefly, with her waxing life and his waning one, they take each other out for one last dance. There’s a lift, an embrace, and she’s pulling him toward the exit. As he falls ill and tumbles, she takes him into her arms, pulling his heavy body in, and after she’s returned his happy dagger to her sheath, she puts his big hand up to her face and kisses it again, one last time.

By the hundreds, we poured out of the theatre and into our city again. We checked our phones—Disneyland had announced its theme parks would close starting that weekend, and Broadway had gone dark. On my way home, I dropped into the Parkdale liquor store, where it was impossible to tell if everyone was stocking up for the long days of self-imposed solitude or if it was just another Thursday night. All around the world, everything was stopping but the clocks.

The next day, Mum forwarded me an email from the National Ballet stating that, because of COVID-19, they’d cancelled the remaining performances of Romeo and Juliet. And then I realized: I hadn’t kissed my mum goodbye that day, or my sister, because we thought we shouldn’t. I didn’t know when I would kiss them again. Civilization was retreating behind its curtain, its nurse calling it in.