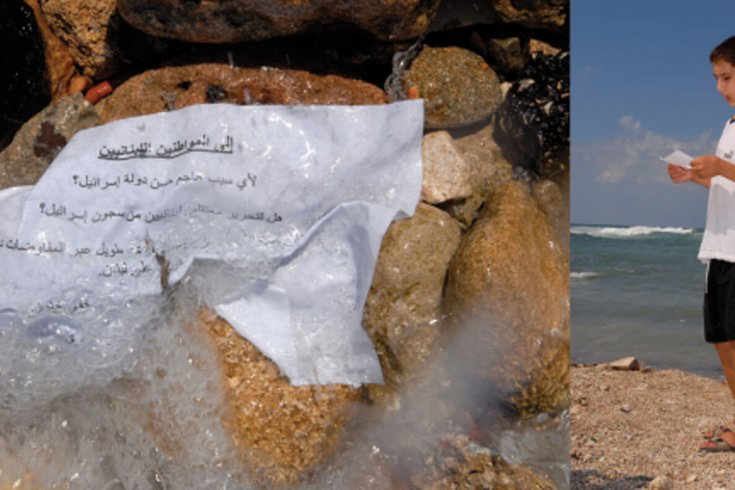 TYRE Israeli planes dropped tens of thousands of propaganda leaflets on southern Lebanon during the war. This one points the finger at Hezbollah's leader: "Hassan [Nasrallah] is playing with fire and that is why Lebanon is burning." Signed, "The State of Israel."

I had no idea how I was going to shoot the story of the 2006 war in Lebanon before I got there. You never know what you’re going to find. Once I was there, I spent a few weeks feeling rather helpless. But this is an important part of the process for me; I look to my subjects for guidance. The idea for the “portraitscapes” had been evolving for several years, and while it was in the back of my mind during the war, it really came together after the ceasefire. The destruction was so widespread there was a risk of its becoming mundane to photographers. In Regarding the Pain of Others, Susan Sontag wrote: “To be sure, a cityscape is not made of flesh. Still, sheared-off buildings are almost as eloquent as bodies in the street.” I made an effort to shoot scenes of wreckage when the light was good because it increases the impact of the photograph. The point is not to make a beautiful picture of something ugly but to make the picture compelling, so people will really look at it. What interests me most about portraits is the way the subject becomes a kind of co-author. Subjects know I will be showing the photographs to other people, and I think that awareness deepens their gaze. As a result, viewers feel a close connection to them. I owe everything to my subjects for allowing me into their lives. I went back to Lebanon recently with my translator and fixer, Nariman Hamdan, to see some of the people I photographed and to bring them my pictures. In most cases, people want their stories to be told, and they put their trust in journalists — or in anyone with the means — to tell their stories as best they can.”