Up in the Air | The Walrus
Skip to content 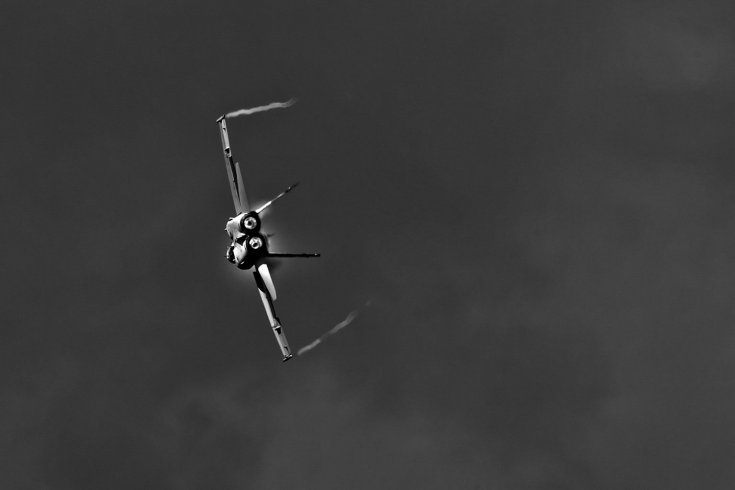 It has been a busy few months for the six Canadian CF-18 fighter jets tasked with bombing the Islamic State. On January 2, more airstrikes were launched than on any single day since June, which followed a month where more combat missions were flown than in any other month since July. These are curious developments for a Liberal government that vowed to end Canada’s participation in the coalition airstrikes in Syria and Iraq.

Although Prime Minister Justin Trudeau never promised a specific timetable for withdrawal during the election, the gist was that Operation Impact would end soon. But nearly three months into office, Canadian air sorties are continuing—and recently at a more frequent pace than before.

There seems to be some confusion within Liberal ranks. On December 7, Foreign Affairs Minister Stéphane Dion said that it was a “matter of weeks, not months.” But on December 18, Defence Minister Harjit Sajjan committed to pulling out of coalition airstrikes within six months—potentially past Trudeau’s timeline of sometime before March and the current parliamentary mandate (issued under the prior Conservative government) set to expire the same month.

Why the foot-dragging? One reason could be the political complexity Trudeau finds himself in. Many commentators, in addition to 68 percent of Canadians according to a November Ipsos poll, support the current operation. That’s perhaps because the Paris attacks on November 13 have stiffened Western resolve to do something—no matter its effectiveness in preventing future attacks.

It’s worth remembering that the United States first spearheaded the official bombing coalition against the Islamic State for largely visceral reasons. The beheading of American journalists James Foley and Steven Sotloff in August and September 2014 pushed a formerly reluctant Barack Obama to extend airstrikes into Syria, a turn of events not lost on Syrians of various stripes. One exiled resident of Raqqa, speaking over one year later about coalition airstrikes, told the Guardian: “Hundreds of thousands of people died in the last few years, and no one came to bomb Damascus.”

And yet the bombing campaign has not degraded or destroyed the Islamic State in any real way, which is the mission’s very raison d’être. According to the monitoring group airwars.org, the coalition has already dropped more than 35,000 bombs. Upwards of 2,000 civilian deaths have been alleged as collateral damage (the Pentagon only acknowledges six, including three children). Partly for this reason groups like the Syrian Observatory for Human Rights reject airstrikes.

In recent months, coalition officials have boasted that more than 20,000 Islamic State fighters have been taken out since the bombing campaign first began in September 2014. If accurate, these numbers are staggering. But a possible body count obscures another crucial detail: In July, an American defense official said there had been “no meaningful degradation in their numbers.” That’s either because US officials grossly underestimated the Islamic State’s fighting force or they keep pace by drawing on a steady stream of recruits—both foreign and domestic alike.

What then of Canada’s contribution? Less than 3 percent of the nearly 10,000 strikes were carried out by Canadian warplanes, meaning that our current role is (hubris aside) mostly symbolic and unlikely to make much of a dent. But it certainly does risk exposing Canadians to the Islamic State’s terror reach. Bombing campaigns can breed reciprocal violence, as the recent attacks over the Sinai and France show.

On a broader level, for all the hype about the Islamic State, the group is more a security nuisance than an existential threat to the West—and a manageable one at that. It’s not us who are particularly at risk, but the 10 million or so Syrians and Iraqis living under its rule. (Even then, for all the Islamic State’s horrific violence and extremist worldview, three-quarters of civilians killed last year were at the Assad regime’s hands.)

If the Islamic State is to be truly weakened, airstrikes without a corresponding sahwa “awakening” is unlikely to make much impact. In Iraq, it was only after Sunni Arab tribes rose up in Anbar Province in 2006 and 2007 that the Islamic State’s precursor, al Qaeda in Iraq, was beaten back.

A better approach for Canada might be to divert what remains of the more than $500 million that will be spent on airstrikes by March toward humanitarian assistance for Syrians and Iraqis. While Trudeau should be praised for rejecting the anti-refugee and anti-Muslim sentiment that has gripped many Western countries, the stop order should come sooner than later. As domestic calls to extend Canada’s participation in coalition airstrikes mount, now is not the time to play optics.

Adam Rasmi (@AdamRasmi) is a former Middle East-based journalist. His writing has appeared in The Economist, Foreign Affairs, London Review of Books, and other magazines.