The Sport with No Referees | The Walrus
Skip to content 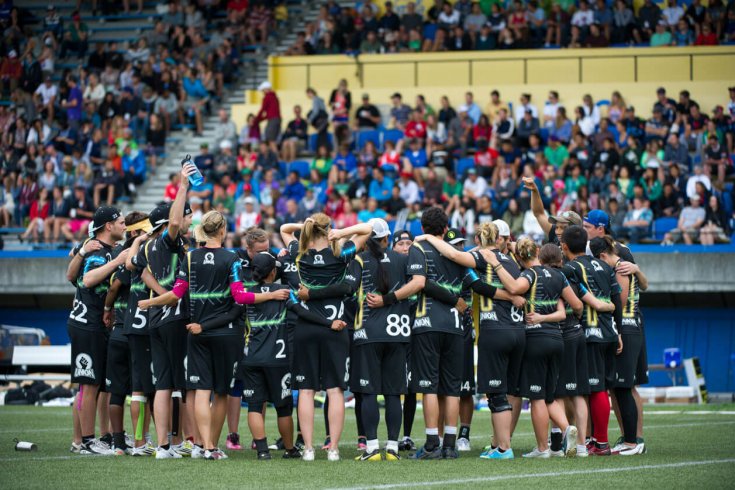 A team huddle at the 2013 Canadian Ultimate Championships in Vancouver. Jeff Bell / Ultiphotos

In July 2013, at the World Under-23 Ultimate Championships in Toronto, the national women’s teams from Japan and Canada faced off in a highly ­anticipated semifinal match. The Japanese squad, known for its coordinated pre-game warmups and sing-song cheers, had a playing style characterized by precise execution and quick disc movement. By contrast, the U23 Canadian team was known for its aggressive, go-deep, high-risk approach.

I was coaching the mixed team at the tournament and was in the stands that day. Ultimate—often referred to as ­Frisbee by the same people who infantilize table tennis by calling it Ping-Pong—has been my sporting passion for most of my adult life. The game combines elements of football and basketball, but without the goal posts, balls, or ­physical contact. ­Seven players per team move up and down a field, passing a disc back and forth. A player with disc possession must stop moving and pass to someone else within ten seconds. The other team gains possession if the disc hits the ground, gets intercepted, or ends up out of bounds.

Canada took an early lead in that 2013 match. But things changed in the second half when Japan found its groove. Eventually, the teams were tied at 11–11; whoever scored next would advance to the gold-medal match.

With Japan on offence, Canadian co-captain Jordan Meron barely missed a ­diving defensive interception, landing hard on the ground; she quickly righted herself and gave chase to Saki ­Suganuma, the Japanese player (and captain) who’d caught the disc. Suganuma released the disc before Meron could get back in ­position to defend her downfield passing lane. ­Thankfully, Suganuma’s end-zone pass sailed left, out of bounds: Canada would regain possession.

But Suganuma called foul, claiming that Meron had bumped into her as she was throwing the disc. Meron admitted there had been contact—but insisted that it had come only after the disc had already been released.

If ultimate were like every other sport in the world, it wouldn’t really matter what Meron or Suganuma thought or said: an ­official would decide. But ­ultimate relies on the principle of “spirit”—a critical concept in ultimate—­according to which the players themselves shoulder responsibility for fair play. There are no referees in international matches, and players are guided by their own conscience when enforcing the rules.

And so, as per the rules of ultimate, there were three options to choose from: (1) Meron could agree that there was a foul, and the disc would be returned to ­Suganuma for a do-over; (2) ­Suganuma could retract the foul call, and Japan would surrender possession of the disc; and (3) the call could be classified as “­contested,” which would mean the disc would be ­returned to Suganuma, but she’d have less time to throw.

When I later reviewed the game tape, I thought it clearly showed the contact coming after Suganuma had released the disc—meaning there should have been no foul call. But I had the benefit of a slow-­motion tape viewing, and human memories and interpretations are notoriously faulty. With a chance at proceeding to the finals on the line, the Japanese player ­stood her ground. The language ­barrier lent the scene a somewhat ­comical quality. ­Suganuma repeatedly indicated, through mimed movements, that Meron had interfered with her throw, and Meron was so desperate to make her case that she lay down on the ground in a bid to ­physically reenact the incident.

As it turned out, one of the Canadian players happened to speak Japanese, and she offered to help translate. But the Japanese team members continued to communicate in their native language. “Faoru tte iinasai” (Say it’s a foul), the Canadian remembers the coach yelling. “Demo…” (But…) the Japanese player said. Yet she did as her coach instructed.

In the background, the rest of the players jumped up and down, trying to stay warm and limber. Those of us watching from the stands couldn’t tell what was happening, and why the argument was taking so long to resolve. Eventually, the tournament’s competition director was pulled into the fray, coaches came over, and a “spirit time out” was called, resulting in a game delay of around fifteen minutes.

First developed by a group of New Jersey high-school students half a century ago, ultimate has always enjoyed a reputation as a haven for ­countercultural types who dislike mainstream jock ­culture. The lack of referees reflects this ethos. ­Contrary to its reputation, ultimate isn’t a “hippie sport”: plenty of the ­players I’ve met are Type A high ­achievers. They train intensely, putting in significant hours in the gym and on the track. But it is true that ultimate players, seemingly more than other athletes, embrace the ­optimistic view that human beings can be counted on to be honest and reasonable.

The game teaches players lessons in conflict resolution and the exercise of ­mutual respect. A non-­profit called ­Ultimate Peace brings Palestinian and ­Israeli youth ­together through the game. ­ReachUp ­Ultimate, a Canadian organization, ­engages Indigenous children and youth in active, healthy living through ­ultimate workshops. In ­Colombia, where soccer and violence are intertwined, the government has flown in top North ­American ­ultimate teams to teach the sport.

The self-refereeing element of ultimate has helped me, too. I’m not playing against my opponents, but playing with them. Without mutual co-operation and respect, there is no game, no sport, no joy. The ultimate mentality has also spilled over into other aspects of my life: I’m more willing to accept other people’s perspectives and opinions, recognizing that it is okay for them to be different from my own.

Ultimate’s trust-based system works out well almost all of the time. Unfortunately, when spirit doesn’t work, it ­really doesn’t work: athletes spend more time arguing than playing, and the game becomes unwatchable. To address this problem, some leagues have developed a form of ­quasi-refereeing known as “­observing.” Under this system, the pri­mary responsibility for fair play and ­making calls remains with the players. But in the case of stubborn disagreement, players have the option of asking an “observer”—an official, ­certified position—for a ruling, which is then ­treated as binding.

One league—the ­semiprofessional American ­Ultimate Disc League—has gone even ­further, ­employing a full-blown referee ­model. But such experiments have produced mixed results. Some ­players argue that the presence of a ­referee can, paradoxically enough, ­increase ­cheating—because players no longer feel the need to police their own behaviour. “The refereed game is different,” says Nick ­Menzies. A seasoned player and a decorated member of the Canadian national team for the World Games, Menzies has ­participated in both observed and non-­observed matches. “You know you can get away with things behind the play. There are only four referees on the field, instead of fourteen.”

Mark Moran, the head observer for ­Ultimate Canada, has served for years as an observer in semiprofessional and ­amateur ultimate matches. “I prefer the observed games,” he tells me. “They maintain a fundamental part of ultimate: they are still player-initiated calls. It’s not a referee stepping in [of their own accord]. As a third party, you can’t feel what the contact was. You only have your [sense of] sight, which means that it all depends on your perspective.”

He concedes that refereeing ­offers the advantage of decisiveness and un­interrupted play: calls are made ­quickly, and the play moves on. But he notes that the same benefits can be had from ­observers—so long as players are required to decide quickly whether they can reach consensus on any given foul call. ­ ­Personally, I’ve ­always liked the ­observer style, because it retains the element of personal responsibility, while adding a quick resolution process. ­Refereeing takes that opportunity for reflection and decision making out of my hands.

The 2024 Olympic Games could mark the first time that ultimate is ­included on the roster of official medal events. While I’m excited by the prospect, I doubt the sport will be played in its pure form: the International Olympic Committee will likely require the presence of observers, potentially setting a new standard for the sport everywhere.

While I don’t mind having observers at the competitive level, I would prefer to maintain self-refereeing in league and youth play. When rookies are forced to ­police their own behaviour, they learn ­values that all sports should imbue in their players: don’t cheat, don’t be a jerk, and don’t be afraid to call out your own teammates when they’re wrong.

As for that game against Japan four years ago, Suganuma ended up keeping the disc, which gave the opponents another chance to score. After yet another dispute—this time about whether a Japanese player had caught the disc inside the end zone—Japan emerged as the victor. Our team’s “spirit” was in short supply as the players walked off the field that day. (Japan went on to lose in the finals against a talented American team.)

Still, my love of the game remains strong. Such disputes are rare, and the increasing adoption of observers means they’re on their way out. If someone wants to win at a league game of ­ultimate so badly that they’re willing to cheat, I don’t mind conceding a game to them. But I won’t concede the unique character of the sport I love.

This article originally appeared in the June 2017 issue under the headline “On Our Honour.”

The Rise and Fall of Toronto’s Classiest Con Man

With My Children, Learning to Love the Little Things