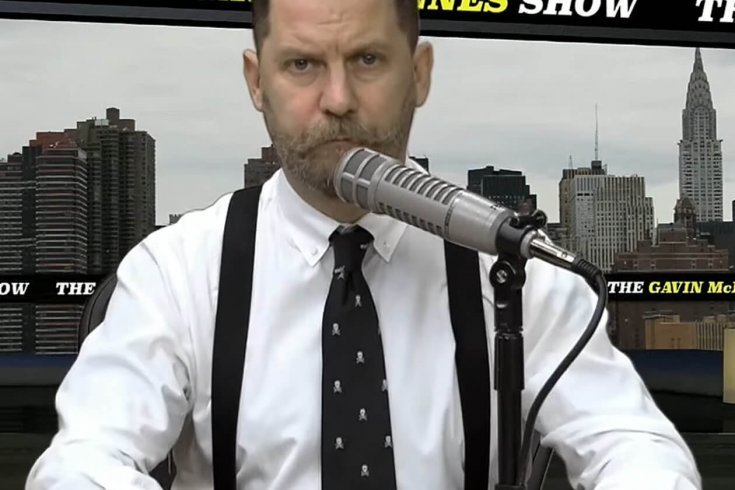 Gavin McInnes on Louder with Crowder.

The April edition of The Walrus features a cover story by Peter Norman detailing his close encounters with Ezra Levant, self-appointed “commander” of the surging online right-wing media outlet known as The Rebel—a site that specializes in Islamophobia, climate-change “skepticism,” and polemics against feminism and LGBTQ rights. So influential has The Rebel become among hardcore Canadian conservatives that most Conservative Party leadership candidates have felt compelled to attend Levant’s rallies, or otherwise tipped their hat to The Rebel fan base.

The site’s more prominent contributors include Faith Goldy, Sheila Gunn Reid, Brian Lilley, John Robson, and, most infamously, the former co-founder of Vice, Gavin McInnes. Once described as the “godfather of hipsterdom,” McInnes first made it big on the conservative circuit as a regular on Fox News. Among Rebel fans, he’s become a hero thanks to his flippant video rants about environmentalists, social-justice activists, and Islam. Salon described him as having a “sordid history of racist, misogynistic and homophobic comments.” And a gay publication condemned him for writing “a transphobic screed” on Thought Catalog. He also has described Muslims as “inbred” and inherently violent, and dismisses the very concept of Islamophobia as a politically correct myth.

Like pretty much everyone at The Rebel, McInnes generally has branded himself a Zionist and a friend of the Jews. Levant himself has staked much of his career on his pro-Israeli bona fides, and aims much of his fundraising and editorial offerings at Canadians who feel that the mainstream media is anti-Semitic. In recent weeks, the Rebel even raised money to send a group—including Goldy, Gunn Reid, Levant, and McInnes—to the Holy Land, so they could report in person from the front lines of the war against militant Islam. It all seemed to be going rather smoothly, with Goldy and McInnes even going so far as to stand in the middle of Bethlehem and call for a new Crusade against local Muslims.

But then it all went off the rails when McInnes riffed on Israel in one of his solo video segments. Seen sitting in an armchair with mic in hand, McInnes described the tour as “basically a brainwashing trip. I mean, I think the Jewish—the Israeli government paid for this and we had donors, too, but I think they were mostly Israelis who assumed we are gonna listen to all this shit we get fed. And that is having the reverse effect on me, I’m becoming anti-Semitic.”

“Like at the Holocaust museum,” he continued, apparently referring to Yad Vashem, Israel’s official memorial to the victims of Nazi genocide. “Or as I called it the”—here, he uses air quotes—“Holocaust museum.” He then adopts an accent that I assume is supposed to sound Israeli, but is more typical of crudely caricatured ghetto Jewish, and says: “At one point the tour guide goes ‘You know and there are some people who think this didn’t happen.’ And I felt like—I felt [like] defending the super far-right Nazis, just because of so much brainwashing, and I felt like saying ‘Well, they never said it didn’t happen’—what they are saying is that it was much less than six million and that they starved to death. They weren’t gassed. That they didn’t have supplies. And they starved to death. They were horrible, and there were mass graves, and all the pictures are real and everything but um, uh, it wasn’t gassing. I’m not saying it wasn’t gassing, please don’t take that clip out of context, but that’s what the far-right nuts are saying.”

It could have ended there. But alas, it didn’t. “There’s been a lot of genocides,” McInnes informs us. “Mao killed seventy million. This guy—I read about this guy that the Tsarnaev brothers [the Boston Marathon bombers] are named after, [who] killed 5 percent—he’s a Muslim [who] killed something like 5 percent of the Muslim population—Tsarnaev—anyway, uh, Stalin, you know with the Bolsheviks killed 30 million. But, the Russians don’t talk about that, they don’t even necessarily see it as a horrible thing.”

And then this: “[The] Holodomor was Ukrainians, I think it was 10 million Ukrainians that were killed . . . That was by Jews, that was by Marxist, Stalinist, Left-wing, commie, socialist Jews. See what this fucking place is doing to me?”

This refers to an old blood libel—the anti-Semitic canard that it was primarily Jews who killed Ukrainians during the forced starvations of 1932 and 1933. It’s not true, of course. Lazar Kaganovich, one of Stalin’s leaders in Ukraine, was indeed Jewish. But most leading Jewish Communists had been exiled or murdered by 1930, and a mere 5 percent of the party’s membership was Jewish at the time. The killers in Ukraine were overwhelmingly ethnic Russians.

McInnes then moves on to the treaty that ended the First World War—always promising terrain for anyone seeking to “contextualize” the crimes of the Nazis: “Even with the Nazis, though, wasn’t the Treaty of Versailles, wasn’t that disproportionately influenced by Jewish intellectuals? And the Treaty of Versailles was the deal Germany got after World War One. It sucked, and Germans hated it, and they were basically told that they had to give all their money back to the Allies, you know, to pay this undue penance for World War One.” (It seems silly to have to mention this, but I suppose I must: Most of the world leaders who conceived and created the Treaty of Versailles were certainly not Jewish.)

As for the Jewish attitude toward the Holocaust: “And you have the Holocaust Museum and you have this guy who won’t stop—god, they’re so obsessed with the Holocaust. And yes, I know it was bad, don’t get me wrong. I’m not pro-Holocaust. That’d be funny in your Twitter bio if it was just ‘pro-Holocaust,’” and he laughs. “But, it’s a strange thing. It’s like a liberal thing, it’s arguably a white thing, but it’s a Jewish thing to sort of dwell on the past. And this whole nation-state is talking about ‘Seventy-five years ago, my people were killed.’ Always the Jews, always killing us, we are the scapegoats.” (Once again, he adopts a mock Jewish accent.) He then informs us that other peoples have suffered, other genocides and massacres have taken place, but that those victims have, well, moved on. But not those Jews.

By the time McInnes arrived back in Canada, he had become something of a hero on various Nazi web sites—with assorted fascists, Jew-haters and even Ku Klux Klan grand wizard David Duke praising his “courage.” Needless to say, this was an embarrassment to all concerned. McInnes hastily recorded an official Rebel apology, which seemed to me about as convincing as an NHL enforcer performing the Dance of the Sugar Plum Fairy. He said he actually loved Jews and hated Nazis, and assured everyone that he had emphasized in the video that what he had said must be taken “in context.” (In fact he only used that phrase once in the original tape—and it’s specific to the subject of Holocaust denial. At no time does the infamous video seem to be overarchingly ironic or satirical.)

All this is quite repulsive and disturbing. And yet Levant has defended McInnes, and even put the man’s cosmetic apology as the pinned tweet on The Rebel’s official account. Which invites the question: Why would a loud-and-proud Zionist such as Levant do this? Given that one of the Right’s main critiques of Islam is the prevalence of anti-Semitism in Muslim communities, why would The Rebel stick by a commentator who uses the Rebel web site to casually tick off long-discredited Jew-baiting talking points?

The most charitable answer would be that Levant is a well-known defender of free speech. Then again, he can be quite selective on this score: He fired me after four days at The Rebel a few years back (before it had become apparent how hateful the site would become) when I dared to defend Ontario’s liberal sex-education curriculum. Levant and his people have also repeatedly called for the defunding and vilification of anyone who seeks to isolate Israel.

No, there is something more fundamental going on here. This is about more than just the ideological pathologies of one weird Canadian media company. It is about a warped new ideological arena where Zionists and creepy Nazi apologists are willing to overlook their differences in service to a common hateful cause.

The entire Trump-Brexit-Le Pen phenomenon has shifted the conversation from informed discussion to wild gestures and hysteria, especially on any issue connected to Islam. Whether it’s Alex Jones and his conspiracy theories, or the US President and his fake-news fetish, anything goes. Outrage is the currency of the new right, and McInnes is a master of the genre. While he makes it look easy, few media commentators have either the hate, or the lack of scruples, to perform this shtick convincingly. And Levant apparently isn’t prepared to give up the clicks that this star generates.

It may well be that McInnes has apologized privately to his Rebel confederates, and promised that he won’t go off-message again. We know he’s been tweeting that he’s not a Nazi, and has even blocked various high-profile racists who applauded his flurry of anti-Semitic memes. But in the meantime, the traffic at The Rebel likely has multiplied.

Questioning the historical narrative of the Holocaust, once the ultimate taboo, is now just fodder for right-wing sensationalism, in other words. A monster has been set free, and I am not sure how it’s going to be pushed back into its soiled cage.