The Restaurant that Cost Quebec Millions | The Walrus
Skip to content 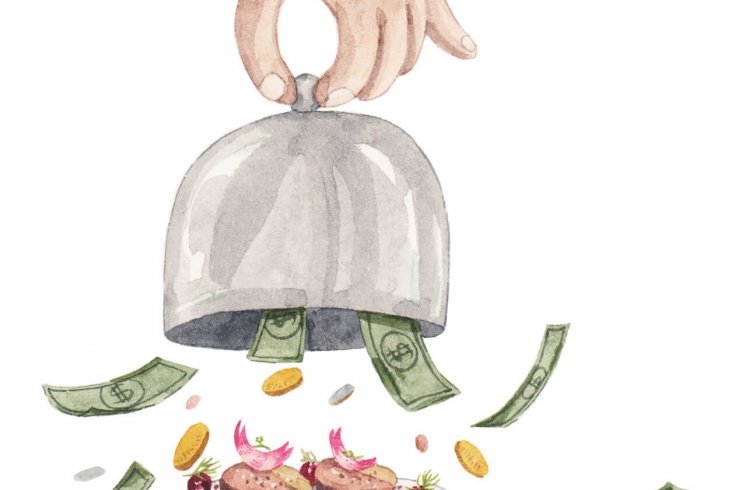 Before you can eat the Quebec government’s gold leaf–garnished caviar, you must get through the slots. There are acres of electronic gambling machines and the people who play them, of pulsing light and sound and painstakingly considered stimuli, of mullets and comb-overs, of bald heads and she-bouffants, of Cash for Life strivers with unblinking eyes, attired in curling-rink chic. You must also get through the table games: through the EZ Baccarat, the Pai Gow, the roulette, and the Texas Hold’em. Oh fuck, that’s going to hurt, says a guy slouched over his blackjack cards. A woman gone bust pushes out from a table, her face turned tourniquet-tight.

To get to the restaurant, you must get past the Zone—an interactive gambling gateway for the twenty-to-thirty-four set. And you must clear the Casino de Montréal’s barely clothed go-go dancers, who writhe impassively for retirees in salt-rimed winter boots. Relieve your mind, if you haven’t already, of any Casino Royale fantasies. This is the Casino Royale with Cheese.

Where is the restaurant? Follow the red line on the carpet, up one floor and through all this, and then down again, to where L’Atelier de Joël Robuchon awaits.

Opened last December, L’Atelier is the most detested and delicious government-owned restaurant ever built in Canada. Robuchon has earned more Michelin stars than any other chef in the world. France’s Gault&Millau guide once called him the “Chef of the Century,” and more than fifty years into his career in food, the title shows few signs of wear. Restaurants with Robuchon’s name can be found in a dozen cities worldwide; L’Atelier, with eleven locations, is his high-end casual concept. Its tasting menus run $95, $150, and $200 a head.

When the project was announced, the initial reception was positive. In the Montreal Gazette, the dining critic Lesley Chesterman, like many others in the city, enthused that Robuchon’s name would draw tourists to Montreal and that the restaurant would provide experience for young local chefs. However, the glow did not last. As Chesterman herself later put it, “I started to think about it: If it’s a showcase for gastronomy at the casino, why is it a Frenchman who makes a cuisine that has nothing to do with us?”

While in much of Canada, the most prominent gastronomic ideas are imported from abroad, Quebec’s best-known chefs have built their careers mining local traditions. Toronto has its Neapolitan pizza shops and Hawaiian poke places and Vancouver its izakayas, but Montreal has the Cabane à Sucre Au Pied de Cochon, an exquisitely rendered maple-sugar shack. Montreal has Toqué!, the pioneering temple to Quebec ingredients, and it has the irrepressible Joe Beef empire, which trades on classic Montréalais French and Anglo foods. Those three rooms alone draw more well-heeled, food-crazy tourists in a night than Robuchon can hope to feed in a week.

Many in the industry claim they have managed this in spite of, and not thanks to, government input. Montreal, by some accounts, is among the toughest places in North America to run a restaurant. Its police routinely levy multi-thousand-dollar fines for the slightest of noise complaints, while construction- and liquor-permit acquisition is often a hair-tearing pursuit. Last year, faulty infrastructure abruptly shut off hydro and water on Joe Beef’s block, twice shuttering the restaurant’s operations on fully booked nights.

So seeing that same city, and province, roll out the blue-and-white carpet for a big-shot French chef was galling for a lot of Montreal restaurateurs. Worse still, Robuchon’s welcome came at what can only be called a lavish price. Quebec’s finance minister announced in February that Loto-Québec, the province’s lotteries corporation, spent $11 million in public funds to open L’Atelier—a figure that puts the room among the country’s most costly openings. (Loto-Québec denies this figure, but hasn’t released the actual cost.) Quebec being Quebec, local functionaries then threw a bottle of brandy into the fire.

In February, a Twitter post from Tourism Montreal blithely claimed that Robuchon’s Atelier would be an asset in helping to “position Montreal, a first-choice gastronomic destination.”

The lions of Quebec gastronomy pulled back their heads and roared.

“All we needed, without it we were fucked! Thank you so much,” Fred Morin, co-chef and partner at Joe Beef, tweeted sarcastically. Morin’s partner at the restaurant, the chef David McMillan, called for a boycott of Tourism Montreal. Toqué! restaurant’s Normand Laprise, who is not merely a gastronomic icon here but also a cultural hero, replied to the tourism board’s original tweet with, “Vous êtes sérieux?”

On a recent Saturday, at least some of that Robuchon-as-culinary-magnet promise was on display. The restaurant, decorated in moody black and red and illuminated by pinpoint spotlights, was just shy of full for a late-evening seating. As I sat at one of L’Atelier’s kitchen-facing tasting counters, a couple beside me swooned before Éric Gonzalez, the restaurant’s executive chef. They had driven in from Ottawa just to have dinner here. One of them pulled out her iPhone and scrolled through snapshots of the dishes to show me. “It was incredible,” she said.

She added, “I don’t know how anybody could ever say anything bad.”

Elsewhere around the room, I heard a few northeastern US accents, but mostly the dinner crowd was local. (Shoutout to the girls’ night trio on my other side, grazing on appetizers and desserts as they howled about Fifty Shades Darker.)

The cooking at L’Atelier is what you’d expect from a Robuchon spot: in almost every respect magnificent. The flavours from the kitchen are clean and precise, the textures calibrated—and in spite of the sauces, the confetti-coloured garnishes, the truffles, the foams, and the gold-rimmed Limoges porcelain, the ingredients are typically the stars of the plates. The presentation, meanwhile, can be astonishingly artful, as if Peter Carl Fabergé and Dale Chihuly were working the kitchen pass.

Save for the odd local ingredient, however, the food says little about the city. Much like your average Applebee’s, L’Atelier de Joël Robuchon is a chain restaurant with chain-wide recipes, minutely proscribed from several time zones away. The langoustine raviolo plate here looks identical to the one at Robuchon’s Las Vegas outpost, right down to the width of the garnish; even the peaks on Robuchon’s famed pommes purées look the same in Montreal as they do in pictures from his Bangkok room. Dinner here is a little like a duty-free Hermès tie: really pricey and beautifully made, but which airport did you buy it in again?

If there’s any salvation for the decision makers behind the restaurant, it has to be the comfort of low expectations. Nobody at Loto-Québec can reasonably expect the restaurant to earn back that $11 million. In any normal, for-profit restaurant of its size, meeting that goal would demand some $16 million in revenues a year. That’s three full seatings per day, 365 days a year (L’Atelier is closed Mondays and Tuesdays) and with none of this grazing from the à la carte menu; every customer would need to spend about $260 before tax and tip.

But who is to know in any case? Both the casino and province’s lottery corporation are effectively black boxes, chewing up and spinning out money in ways that nobody on the outside is meant to comprehend. Win, lose, or hemorrhage cash, the house can always call its restaurant a win.

I had two desserts that night, the most memorable being a cool, tropical froth in a highball glass. It was called Le Parfum des Îles. There were layers of custard, passion fruit crémeux, and banana cream—with hints of rum granité and lime zest. The topping was a cloud of foam, which the server called a coconut wisp. It ate like a Gauguin canvas come to life.

Earlier, on the way in, I’d passed a row of slots emblazoned with images of a young, carefree couple. In my memory of it, they were running hand in hand on a staggeringly beautiful beach. The jackpot for that game was money, of course, but the money hardly mattered. The real payoff was pure escape: from winter, from snow boots, from bills, from all of it. If you won, you would never need to come to this casino ever again. I thought of that as I ate my dessert. There are so many ways to get away.

A version of this article appears in the May 2017 issue under the headline “Casino Cuisine.”

Chris Nuttall-Smith (@cnutsmith) is a food writer and restaurant critic. He has written for Lucky Peach, Esquire, and the Globe and Mail.
Justine Wong