The Problem with Polar Bear Propaganda | The Walrus
Skip to content 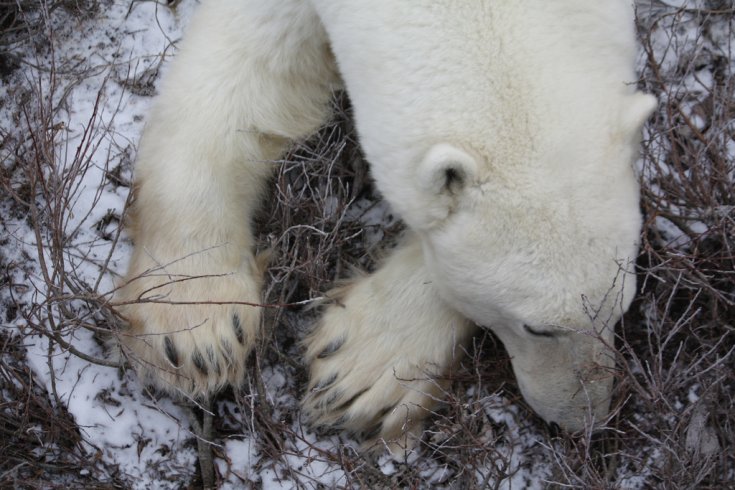 On December 7, National Geographic shared a video in which an emaciated polar bear, hair clumped and skin hanging off its bones, drags itself over the tundra on Baffin Island, scavenging an animal skull from a rusty barrel. “This is what climate change looks like,” a caption declares ten seconds in. The captions go on to assert that with shrinking sea ice, polar bears are losing their platform from which to hunt seals and are starving as a result. The video quickly went viral. Though the footage was widely viewed and shared, not all agreed with the assessment from SeaLegacy, the conservation group that produced the video.

“Climate change has very little to do with it,” says Eric Ootoovak, a hunter and the vice-chair of the Mittimatalik Hunters and Trappers Organization in Pond Inlet, Nunavut, at the north end of Baffin Island. “You can really tell he’s sick. He’s not starving. If he was starving, he’d be able to move a bit more than that.” (On Twitter, biologist Jeff Higdon also suggested the polar bear might have had cancer.)

Environmental groups and Inuit in Canada have long had a fraught relationship, and it has only recently begun to improve. In 2014, Greenpeace apologized to Inuit for its decades-long campaign against seal hunting, which had led the European Union to ban the importation of seal products in 2010. While not targeted at Inuit, the ban nevertheless destroyed a small industry of exports that dovetailed with seal hunting in Nunavut, a territory of 38,000 people and millions of seals. Also in 2014, Greenpeace threw its support behind Clyde River, as the Nunavut community and its mayor, Jerry Natanine, took the National Energy Board to court to block the NEB’s approval of offshore seismic testing for oil. In a decision this summer, the Supreme Court sided with Clyde River and Greenpeace, scoring a victory for Inuit and strengthening the unlikely partnership.

Yet activists continue to use images of seals and polar bears to attract interest in their work, often with messaging that contradicts Inuit knowledge. Countless news images, environmental campaign materials, and book covers depict a lone polar bear atop a small ice floe surrounded by open water to convey the urgency of melting sea ice in the Arctic. And while most Inuit won’t deny that shrinking sea ice is a problem, the hunters I spoke with argue it’s wrong to think polar bears are suffering as a result—especially if that misconception were to result in political pressure causing Inuit to lose their already limited rights to hunt polar bears for meat and skins or to guide visitors on a polar bear trophy hunt. Meanwhile, hardly any researchers or scientists, other than those employed by the Government of Nunavut, seek expertise from hunters and elders about the bears’ health.

Yet Inuit are the world’s foremost experts on polar bears. Hunters across Baffin Island have been monitoring polar bear populations since long before environmental groups turned the animal into a cause. “There’s too many bears in our area,” says Ootoovak, who’s hunted all his life. The animals are becoming more and more plentiful, almost to the point of being a nuisance. “My grandmother used to tell me stories from when they lived in sod houses and they would never see polar bears. When there was finally a bear, people all over spoke about it. Today, it’s impossible to camp without having a bear watch.”

Ootoovak says when bears—males, mothers, cubs—are spotted around town, they’re generally healthy. And shrinking sea ice won’t hurt them. “Polar bears are much happier hunting in water,” he says. “They can’t really hunt on the ice. The ice is in the way, right? Polar bears hunt all day in the water, for days at a time. They have less success when there’s too much ice.”

In Arctic Bay, tucked within Admiralty Inlet at the top of Baffin Island, hunter Jobie Attitaq says his community has also been seeing a rise in the number of moms and cubs over the past two years. Many have been coming to feast on the remains of the narwhals Inuit hunters harvest.

Nick Arnalukjuak, chair of the hunters and trappers organization in Arviat, a Nunavut community on the western shore of Hudson Bay, says his community sees more than its fair share of healthy polar bears. (Halloween—and, more importantly, trick-or-treating—had to be cancelled for two consecutive years because of polar bear sightings in town.)

“Sea bears, they’re really well adapted to sea life,” he says. “They can swim hundreds of miles and even sleep—they’re belly up and they can sleep on water.” They’re also well adapted to land: the bears will hunt at sea and bring their kill to the shallows at high tide to eat, or they will cache their kills on the mainland. Some activists, he says, claim that sightings of bears hunting for bird eggs on land is a sign they can’t eat at sea and are desperate for food. It’s not that bears are resorting to eating eggs, Arnalukjuak counters, sometimes, bears just want to eat eggs. They even snack on seaweed. For more wholesome meals, there’s an abundance of their main prey: “we’ve got ring seal, bearded seal, beluga, even fish, so no shortage of food.” Bears are built for diving, Arnalukjuak adds, so access isn’t an issue.

Like Ootoovak and Attitaq, Arnalukjuak is skeptical of links made between polar bear health and the effects of climate change. It’s more likely, he says, that bears are just a convenient and effective fundraising tool for environmental groups. He won’t deny that some bears do get sick, orphaned, or maimed fighting each other, making them unable to hunt. “That’s [the] normal cycle,” he says. But there’s no indication that polar bears are in any way endangered. “We don’t have starving polar bears, we don’t have polar bears facing hard times because of ice. As long as we have four seasons—spring, summer, fall, winter—nothing’s going to change.” And, he says, when something does change, Inuit will be the first to notice and raise the alarm.

Ootoovak says the responsibility naturally falls on Inuit hunters to protect the animals they live around. In his role as vice-chair of the Mittimatalik Hunters and Trappers Organization, for instance, he helped get Baffinland Iron Mines to cancel its winter sealift program earlier this year. The heavy icebreakers used to deliver supplies to the mine on Baffin Island would have chased away seals and weakened the ice, making it dangerous for hunters to traverse.

“I have to laugh when I’m reading activists’ stories,” says Ootoovak. “I just laugh at them. They have no clue what they are talking about. You have to live amongst [polar bears] to understand them. It goes for every species on this earth.” He may be knowledgeable about local wildlife, he says, but wouldn’t presume to know about or speak for outside species. “I can’t say anything about your animals down there.”

Tim Edwards is a writer and freelance journalist from the NWT. He has been editor of Up Here and Nunavut News/North.