The End of the Line | The Walrus
Skip to content 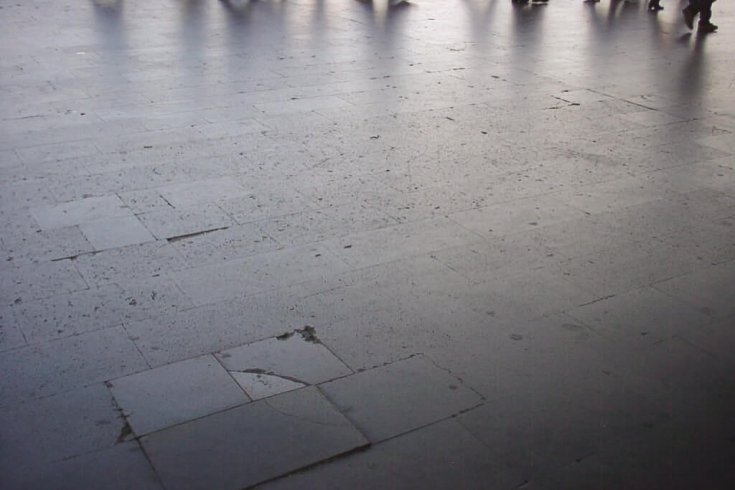 Rome's Termini Station, where hundreds of asylum seekers take refuge and some even live / Photograph by Jun Fujinuma

rome—It was after ten o’clock on a Friday night. Just outside Termini, the main train station in Rome, the street was quiet and dark; there were only a few people huddled against the wall. Francesco Cozzolino, a worker in charge of helping the homeless and asylum seekers who take refuge in the station, was walking along the street, explaining why he thought Italy’s new but as-yet-unimplemented immigration law would make things worse. The situation was so bad at Termini that there were times—like last winter when a wave of African refugees landed, that it was impossible to wheel your suitcase along the platforms because of the people trying to sleep there.

“This new law isn’t even achieving its own goals,” Cozzolino was saying. “It creates more illegal immigration.” He was about to expand on this when a man stepped out of the darkness and asked Cozzolino, who was smoking, if he could spare a cigarette. Then the man asked if he could speak in English. Cozzolino nodded.

“I need help,” the man said. “I am from Algeria.” His face was weathered and scarred, and his lower lip was split and stitched. His darting eyes were full of tears. “My wife and my child are dead,” he went on. “I don’t know what to do. I’m hungry.” He put the cigarette to his mouth. Cozzolino lit it and then touched the man’s arm and told him to be calm. “I work here,” Cozzolino said. “It’s my job to help you.”

The man was suddenly alert and wary, and when Cozzolino told him he could eat at a Catholic agency nearby and then come to his office inside the station to apply for official status in Italy, he started backing away. “I just want money,” he said, “just to buy some pizza.”

Cozzolino was about to tell him he could help, but the man bolted, leaving Cozzolino to shout after him: “Come back tomorrow, to the Help Center on Platform One.”

Platform One is a busy area of a busy station. Cozzolino’s boss at the Help Center, Alessandro Radicchi, estimates that half a million people pass through Termini every day, most of them passengers on their way to Florence, Venice, or Milan. “Out of this five hundred thousand there are maybe one hundred people who take this place as their reference point. They are [mostly illegal] immigrants who meet outside the station. Of this one hundred, about sixty really live here and there are about ten who have lived here a very long time. We know them by name. Many of them are old, but sadly we find young immigrants sleeping here, too.”

Some of the people who sleep in and around the station are Italian, such as the woman who was hit by a train in the station more than ten years ago and now sleeps there in her wheelchair, refusing to leave the scene of her accident. There is also a former military man from the French Foreign Legion who calls himself Che Guevara. And poor Raimund—who was part of the wave of immigration from eastern Europe in the early nineties—had an accident and lost one of his arms and his job. Now, especially when he’s drunk and the guards won’t let him inside, he sleeps on the ground outside the station.

The Help Center opened in December, 2002, to assist anyone in need, whether a lost tourist or someone fleeing their country. Recent refugees have come from Iraq, Turkey, Afghanistan, and the Middle East, but the majority come from seriously troubled African countries such as Sierra Leone, Liberia, and Sudan. Many arrive by boat to Sicily and from there make their way north. Some travel through Italy to another country; others head for Termini, and from there, disappear into the world of illegal immigrants. Others ask for political asylum. If their request is granted, they are given refugee status and a work permit. After five years of continuous, uninterrupted employment, they can apply for citizenship.

Under Italy’s old immigration laws, asylum applicants were given a small amount of money and promised a hearing within two months. In the early nineties there were fewer than one thousand people a year who needed to be processed. But, in keeping with world-wide trends, the numbers have skyrocketed: in 2002 there were 7,281 claimants in Italy, according to the United Nations High Commissioner for Refugees. The waiting period before a hearing has now grown, in some cases, to a year and a half. Some assistance, such as food and shelter, is now available for nine months, Radicchi explains, but only for a total of twelve hundred people, which is still not enough.

Processing asylum seekers is becoming more difficult as well. Often they arrive with nothing but a story to tell. “An asylum seeker [has] problems like political or religious persecution,” Radicchi explains. “They are being followed, in some cases, by people with guns. Often the family has to leave their house immediately because the soldiers are coming. They don’t have time to take their identity documents or passports.”

The staff in the Help Center arrange temporary papers, Italian lessons, and health coverage. Too often, however, the nine months comes and goes without a hearing, and they come back to sleep in the station.

“There is one I remember well,” Radicchi says. “On the first day he arrived he was very strong, energetic. He was from Liberia and sleeping on the street just next to the post office. He came here for a week, and we tried to help him but each day you could see him going down.” Then they lost track of him. Radicchi thinks he disappeared into the underworld of selling drugs or black-market goods.

This illustrates the point Cozzolino was trying to make that night on the dark street outside Termini. The new law is known as the Bossi-Fini law after its two right-wing sponsors, Gianfranco Fini, leader of the National Alliance, and Umberto Bossi of the Northern League. It shortens the waiting period for the hearing to thirty days. But Cozzolino, Radicchi, and other critics say there is now too little time to investigate and document claims, which means that otherwise legitimate claimants will inevitably be turned away and issued deportation notices. They will be allowed to appeal only if they return to their country. But few will actually leave.

“So now the number of homeless grows while the number of refugees goes down,” Radicchi says. “The problem is the homeless are now people without documents. They escaped their country and they are scared, and now it’s harder to help them because they don’t have documents. They have nowhere to go. So we will see them here, sleeping in the stations of Italy and on the streets.”