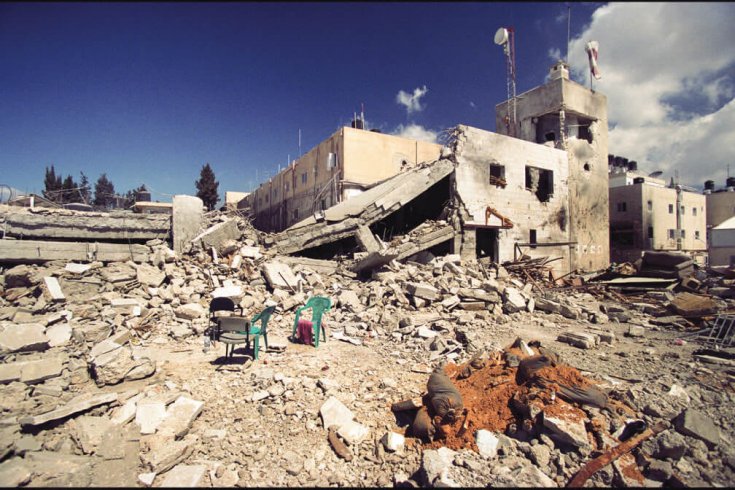 ramallah—Once pink and robust, Yasir Arafat’s complexion is now a pale grey, his face noticeably thinner. I had not seen him for some time, and when I met him late last summer, his body seemed disproportionately large. For a moment I wondered if he was suffering from edema. But it turned out that Arafat’s bloated condition has more to do with Israeli policy than with any physiological disorder. In the spring of 2002, Israeli soldiers burst into his compound and confiscated tens of thousands of telegrams, faxes, and top-secret communications, some of which were published in an effort to prove that Arafat supported terrorism. Ever since, he files his most important papers in the wide pockets of his military uniform. Vulnerability has transformed the leader into a walking archive, an overstuffed safety-deposit box.

I was in Ramallah to participate in the modest celebration of Arafat’s seventy-fourth birthday. The Chairman spent the day holding court with local politicians and hosting schoolchildren, who were ushered into the Mu’kata, his home and headquarters, in classroom-sized groups. Many groups presented him with a wreath of flowers, and young children recited blessings they had rehearsed to perfection. Some got close enough to stroke his signature unshaven face. Arafat was clearly enjoying the attention until he was asked when he had last seen his daughter. “Zahawa called today to congratulate me,” he said gloomily, “but I don’t know if I would recognize her because the last time I saw her was four years ago in the Paris airport on my last trip to America.”

On more than one occasion in 2002, Arafat’s headquarters was attacked by Israeli tanks. Bulldozers flattened the stone houses of the compound and many parts of the Mu’kata have been reduced to rubble. For the past twenty-eight months Arafat has been under house arrest. He comes and goes only with the permission of Israeli authorities. It is doubtful that there has ever been a comparable situation in which a ruler is so confined even as he continues to govern.

Yet despite the tethers, Arafat’s leadership remains crucial. As chairman of the Palestinian Liberation Organization (PLO), he governs over the Palestinian nation worldwide. Arafat is also president of the Palestinian Authority (or P.A.), which rules the occupied West Bank and Gaza, and head of the Fatah, which today holds the majority of power in the P.A.’s legislative council. Should Arafat die or be “removed” – something Israeli Prime Minister Ariel Sharon seems to want – a great vacuum would be created, not only because Arafat is the living symbol of the Palestinian struggle but because he rules over all of its aspects. To date, he has not appointed a successor. It is in fact not at all clear who could, or would, replace him in any of his three principal capacities.

Some provisions, of course, are in place. Should the chairman die or retire, the PLO constitution empowers the central committee to appoint or elect one of its own in his place. These days the central committee’s secretary general, Mahmoud Abbas (or Abu Mazen), is still positioned as Arafat’s most likely successor. In March, 2003,Abbas was appointed the first-ever Palestinian prime minister; his resignation four months later was a direct consequence of Arafat’s failure to support him, and leaves serious doubts about his ability to lead the PLO.

The Palestinian Authority also has a protocol in place. In the event of Arafat’s demise, the P.A.’s parliamentary speaker would be called to govern for an interim period of sixty days, after which time an election would have to be called. Until November, 2003, the P.A.’s chair was Ahmed Qureia (or Abu Ala), who has since replaced Abbas as prime minister. After appointing his cabinet, Qureia resigned as speaker and was replaced by Rafik Natsheh, a member of the central committee of the Fatah movement. According to P.A. procedure, then, Rafik Natsheh would replace Arafat as interim president of the P.A.

In his role as head of Fatah, Arafat currently has no obvious successor.

Formal procedures and provisions are important, but in regions as vulnerable and volatile as Gaza and the West Bank, institutional frameworks can easily be circumvented. It therefore becomes important to consider potential leaders who are not dauphins. Three relatively young men – Jibril Rajoub, fifty-one, former head of security in the West Bank; Muhammad Dahlan, forty-three, former chief of security in the Gaza strip; and Marwan Barghouti, forty-five, leader of the Tanzim (the Fatah paramilitary wing) – are all possible candidates for the top positions. Since the eruption of the second intifada, however, both Rajoub and Dahlan have lost considerable stature. Barghouti, though, was arrested by Israeli security police about two years ago and has been in jail ever since. Like Nelson Mandela, Barghouti has benefitted from this forcible sequestering, and now enjoys immense street-level popularity. These days a great number of Palestinians see him as the only leader with sufficient charisma and authority to wear all three of Arafat’s hats.

It is more likely, though, if Arafat goes, that his role will be divvied up among three different leaders. Palestine would thereby immediately become much more difficult to govern, reducing even further the likelihood that negotiations with Israel would resume in any manageable way.

For the time being, Arafat continues his unassailable reign. Should Sharon force him from office, no one would dare take his place; to do so would probably amount to a death sentence, since every Palestinian would perceive it as an unforgivable collaboration with the Israelis. The forceful eviction of Arafat may also lead to the dissolution of the P.A. Should that happen, Israel would be compelled to engage in direct governance of the occupied territories; Israelis would have to send out their own tax collectors and maintain the extensive infrastructure, which includes a very costly health-care system. This is not an option Israel would welcome, and it may well be the main reason the Sharon government has thus far resisted the temptation to oust Arafat.

Since the breakdown of the peace process in September, 2000, the opposition – Hamas and Islamic Jihad – have gained serious footholds in the West Bank and Gaza. The day after Arafat goes, Hamas and Jihad leaders would attempt to expand their hold. Even if Arafat were to die of natural causes, there are still serious doubts that the Palestinians could replace him without considerable and sustained chaos.

The End of the Line