The Cruise Ship Cometh | The Walrus
Skip to content 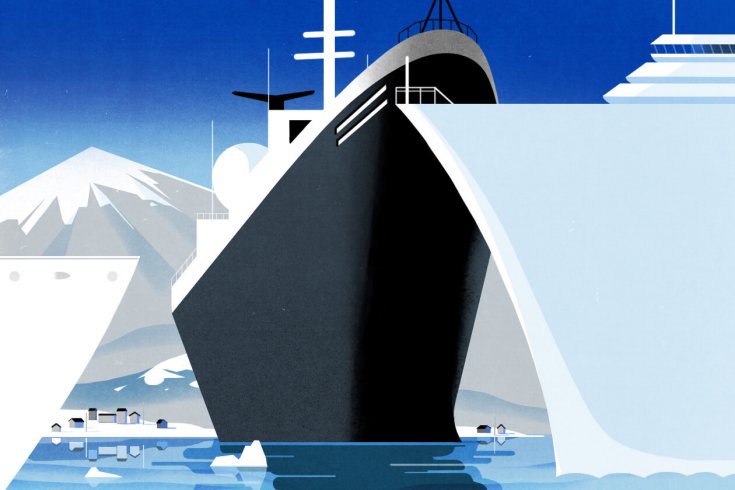 It’s Ship Day in Pond Inlet, Nunavut. No one here calls it that—it’s a term I’ve heard in Skagway, Alaska, where seasonal tourism workers talk about two-ship days and three-ship days; about the dreaded five-ship day and the rare, to-be-savoured no-ship day. Skagway, though home to just 800 year-round residents, is a major cog in the billion-dollar Alaskan cruise machine. There are days each summer when thousands of tourists disembark from giant cruise ships and clog its narrow grid of streets. The main drag, Broadway, is lined with dozens of storefronts catering to the seasonal influx: popcorn and fudge, jewelry, T-shirts, local art. In winter, almost every storefront closes and the village sleeps. Since Alaskan cruise itineraries gained rapid popularity in the 1980s and 1990s, Skagway has become a community defined by the presence, or the absence, of the ships.

Pond Inlet, though double Skagway’s size, is still an infant in cruise-industry terms. Most days here are still no-ship days, and I figure it will be a while before the community needs such specialized lingo.

I’m up early because I know it’s Ship Day. A piece of paper taped to the door of the small public library lists the thirteen vessels scheduled for Pond Inlet this season, and today, the Quark Expeditions vessel Sea Adventurer is slated to arrive. But when I peek around the blackout curtains on my hotel room window, the ocean outside is empty.

The ships provoke mixed feelings in Pond Inlet: hope for the economic possibilities and fear of the environmental and cultural threats.

Pond, or Mittimatalik (“The Place Where Mittima is Buried”) sits on the north shore of Baffin Island, facing the eponymous Pond Inlet, which leads east to the Davis Strait and Greenland, and Eclipse Sound, which tunnels northwest, deeper into the Canadian Arctic archipelago. Across the water from the village and dominating the skyline is mountainous, glacier-covered Bylot Island, a long-time bird sanctuary and part of Sirmilik National Park. Behind the village, Baffin’s own glacier-draped mountains tower, too.

It’s easily one of the most beautiful natural settings of any community in the Canadian Arctic. Even on a grey, overcast day like this one, when the cloud ceiling cuts off the peaks on Bylot, I find myself wanting to just sit and stare for hours at the scenery. I’ve been here once before, last summer, when I arrived on a small cruise ship, disembarked for a too-brief afternoon, and then sailed away again. This summer feels different: Instead of standing on deck, waiting for the village to appear on the horizon, I’m on shore, watching the empty water. I’m in the crowd waiting in the airport arrivals hall, not the traveller landing in a strange new place.

Just before 10 a.m., I spot the Sea Adventurer, still a white speck in the distance, hugging the shore of Bylot Island as it motors slowly down the inlet towards the village. Eventually, the crew anchors the ship just offshore and lowers a Zodiac over the side to fetch the customs agents who have been flown in to Pond specifically to process the new arrivals from Greenland. Only once everyone has cleared customs will the passengers be able to come ashore for four, maybe five, hours in town.

These days, Pond Inlet sees about a dozen small cruise ships a year—“expedition-class” vessels, to use the industry lingo: modest, ice-strengthened, former research vessels, typically, that carry 100 to 200 passengers. But this year, the thirteenth and final visitor to Pond will be the Crystal Serenity, a 1,000-passenger luxury behemoth (relatively speaking—there are some operating elsewhere in the world that carry thousands at a time) that will be the first major, full-size cruise ship to transit the Northwest Passage. With passengers, staff, and crew all factored in, the Crystal Serenity will match or even exceed Pond Inlet’s total population.

It’s due to arrive on September 4, and Pond Inlet is better prepared than some other small Nunavut communities for its arrival. Cruise ships have been showing up here occasionally since the 1970s, and the flow of arrivals has been steady since the early 1990s: two or three a year at first and then more as the sea ice shrank and interest in the Arctic grew. Pond Inlet’s readiness for each visit has grown with the seasons, too, and now the routine is well dialled. A few years ago, the town produced a pamphlet, “Welcome to Pond Inlet,” to be distributed to passengers on the ships before they land. It outlines some basic etiquette: Don’t photograph children or elders without permission; leave artifacts and the natural landscape the way you find them. The pamphlet and the town’s routine for handling visitors as they disembark and explore town are both meant to prevent any resentment or conflict. The ships provoke mixed feelings among the locals: excitement and wariness at the flood of strangers; hope for the economic possibilities; and fear of the environmental and cultural threats they represent. Pond’s residents tend to be wary of the judgments of outsiders: the PETA and Greenpeace publicity campaigns against whaling and sealing, and the economic sanctions that sometimes follow.

I walk down to the town’s main beach just before noon. The customs agents are still on board the Sea Adventurer checking passports and collecting paperwork. On the beach, two men and a woman in fluorescent reflective vests prepare for the passengers’ arrival, using rope to cordon off an empty stretch of beach. The cruise ships’ Zodiacs used to unload wherever they chose, but that made the local hunters unhappy. Pond’s beach is a working waterfront, crowded with sled dogs, sheds, komatiks (wooden sleds pulled behind skidoos in winter that carry cargo or people), and small boats—aluminum skiffs and wooden freighter canoes—pulled up on the sand. The hunters didn’t want to have to dodge dozens of tourists while they brought in their day’s catch of seal or narwhal, or prepare to set out again on a hunt. Today, there’s a designated landing area—cleared of everything except a large wooden sign that reads “Welcome to Pond Inlet, Nunavut” in Inuktitut, English, and French—for the Zodiacs to disgorge their cargoes of gum-booted tourists.

A light rain falls as the Sea Adventurer finally lowers its Zodiacs to the water. In the distance, the ship’s PA system crackles, presumably telling the passengers to proceed to the gangway to disembark. A scattering of local children join me on the hill above the beach, watching, and one of the town’s official tour guides, wearing a beautiful sealskin amauti, scrambles down the path beside us, arriving just in time.

As each Zodiac unloads, the beach gradually fills with visitors in matching, bright yellow raincoats. They’re divided into groups, each one led by a local tour guide, for a walking tour that includes the Parks Canada office above the beach and the public library’s displays for visitors. From there, they head to the community hall for a cultural performance: throat singing, drum dancing, traditional Inuit games.

They look like an invading army, or some strange herd migration, as they stream away in groups behind their Inuit guides. They take photos of birds, of sled dogs, of Inuktitut street signs, of local people. They move slowly, wide eyed and taking in everything, up the hill and into town.

Later that afternoon, while the Sea Adventurer’s passengers are still at their scheduled cultural performance, another ship appears along the shore of Bylot Island, steaming towards town. It’s the Akademik Sergey Vavilov, a One Ocean Expeditions vessel that wasn’t expected until tomorrow. It glides to a halt just beyond the Sea Adventurer, lowers its anchor, and settles in off shore. I wonder if weather or some other factor prompted its change of plans, and how the town will entertain a second group of visitors before the first has left.

The reporting for this story was supported by the Canada Council for the Arts.

Eva Holland (@evaholland) has written for Up Here, Grantland, and Outside. Her book, Nerve, on the science of fear, was published last year.
Min Gyo Chung