The Ambassador of Art | The Walrus
Skip to content 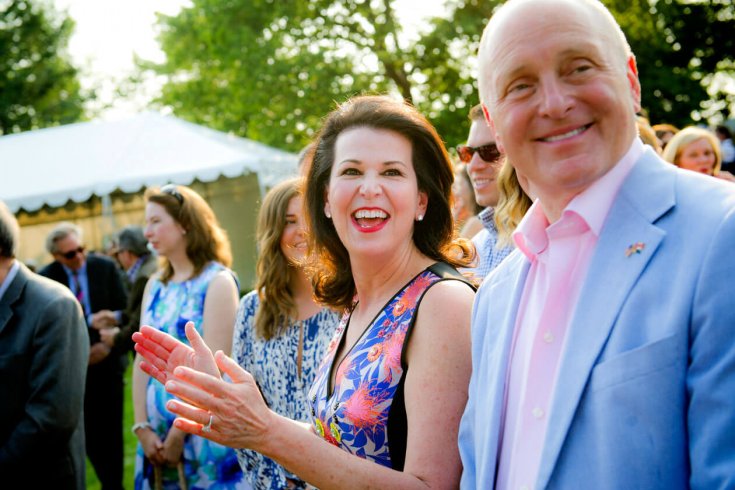 Vicki and Bruce Heyman at the Lornado Fourth of July party in 2015.

It would be difficult to upstage the larger-than-life, tessellated portrait of President Obama that hangs in the library at Lornado, the residence of the United States Ambassador in Ottawa. “It has been a signature piece for us,” said Vicki Heyman, wife of Ambassador Bruce Heyman, and the country’s unofficial cultural diplomat. “Everybody wants to have their picture taken in front of this, of course.”

To overlook the other pieces of contemporary art in the house, though, would be a mistake. Eric Fischl’s Tumbling Woman sculpture caused public outcry when it was installed in the Rockefeller Center in New York a year after 9/11; a glass maquette of the work stands on the coffee table at Lornado. On a good day, Nick Cave’s life-sized human figure teeming with beads and metal flora, which is found in the living room, might also give the Obama portrait, by Chuck Close, a run for its money. But I did not visit Lornado on a particularly good day. It was rainy, it was mid-November, and Donald Trump had just been declared president-elect.

Like all US Ambassadors to Canada in the last quarter century, Bruce Heyman, a former director at Goldman Sachs, came to the post as a political appointee. The Heymans met Barack Obama, as powerful Chicagoans were wont to do, at a small dinner party in 2006. They were quick converts to the future president, raising some $750,000 and working on the national finance committee for his 2012 campaign. During Obama’s second term in office, Bruce Heyman was offered the ambassadorship.

Vicki Heyman has spent the past three years working on her own agenda—to use contemporary art, as she puts it, as a springboard for wider discussion. “I think of art as a doorway that people can walk through,” she said, as she led me around the residence.

Heyman, who is sixty, takes a fastidious approach to grooming; her eye for aesthetics extends well beyond art. When I visited, she wore an all-black outfit devoid of lint, and suede ankle boots apparently immune to the realities of Ottawa weather. She carried a travel mug of coffee that she drank through a straw. Her teeth are impressively white; this is important, as they are almost always on show.

“I decided that this was going to be a seminal thing that I was going to work on,” she said of the works on view, as she stepped back to look at a large photograph.

When Heyman arrived in Ottawa, her first step was organizing an exhibition in the official residence: ten works by American artists were put on display in early 2015. (A forthright proposition made by Canadian photographer Edward Burtynsky later bumped the number of pieces up to eleven.) But Heyman wanted more than a token gesture of US-Canadian cultural appreciation: “I wanted to bring the art off the walls and bring the artist’s voice into the community.” With Marc Mayer, director of the National Gallery of Canada, she began to plan a series of talks. Influential American artists Marie Watt, Eric Fischl, and Stephen Wilkes travelled to Ottawa in 2015; Kiki Smith and Theaster Gates spoke in 2016. Smaller off-site events supplemented the talks. “Salons” at the residence, organized by students in Carleton University’s curatorial program, led to discussions about civil rights, immigration, and community. When artists were in town, there were dinners to hold, workshops to attend, sewing circles to helm.

“The artist is such a credible interpreter, an authentic and trusted spokesperson for the current state of the world,” Heyman told me later in my visit, as we walked through the National Gallery. Her role, as she sees it, is that of a facilitator. She values artists’ and her audiences’ opinions, and yet it often feels difficult to take the measure of her own. She discusses connection itself as one of her primary goals. “I think conversations should be taking place not only in institutions, but also in homes, on street corners, online,” she said.

The same emphasis is reflected in her diplomatic approach. Heyman looks directly at you when you speak, makes physical contact at consistent intervals, drops your name easily into conversation. She never appears bored, despite the fact that her talking points remain consistent in interviews. Her interest lies in accommodating, listening to, and introducing people to one another. Conductors cannot have electric fields of their own.

Last May, Heyman threw a dinner party for the Chicago-based Gates following his artist’s talk at the National Gallery. There were forty-eight guests. Some were politicians, like Canada’s finance minister, Bill Morneau. Some were artists, like painter Chris Cran, who was in town from Calgary to install his retrospective at the gallery. Some were musicians, like former Great Big Sea front man Séan McCann, who arrived bearing his acoustic guitar, nicknamed Old Brown. After a course of mirin miso–glazed sea bass, Gates stood and started to sing. McCann joined in, and the two ad libbed a version of “Amazing Grace.”

There’s an echo of Camelot, when the White House existed as an allegorical home for musicians and artists under Jacqueline Kennedy. The connection with Heyman’s US ambassadorship extends beyond sensibilities: it was under President John F. Kennedy’s purview during the early 1960s that the Art in Embassies office, which works with ambassadors to select art for their residences, was formalized. In theory, art has always been present at the official residence in Ottawa, but it has rarely registered as a priority for past US Ambassadors to Canada. Before the Heymans arrived, David Jacobson mixed Group of Seven works with American landscapes. David Wilkins, who preceded Jacobson, opted for depictions of his home state of South Carolina. In the early 2000s, Paul Cellucci borrowed contemporary work from the Massachusetts Museum of Contemporary Art. Heyman’s work in using art as more than mere decoration is rare, and likely won’t be repeated soon.

When I visited, the next US Ambassador to Canada had not been named. On December 23, the transition staff for President-elect Trump issued an edict recalling all sitting politically appointed ambassadors of the Obama presidency. In practice, sitting ambassadors have often been allowed to remain in residence to provide their own transition period, as a courtesy. Bruce Heyman later tweeted that he had formally resigned “as requested,” and confirmed he would be leaving his post by Inauguration Day.

When I asked Vicki Heyman about the election upset, she answered carefully. “Democracy can be loud, noisy, and messy. Democracy played out. Donald Trump is our new president, and I am hopeful that we can go forward and that things will continue on the right path. And I know for sure that I will be working on these things, as will millions of Americans who feel deeply about issues of social justice, diversity, and inclusion.”

We may be witnessing the end of a golden age. Some of the couple’s ambassadorial legacies are secure. The two newly installed beehives will continue making honey. Borage will sprout in the renovated edible garden. The 2017 artist talks already planned will forge ahead, running into the next ambassador’s tenure. But there is no requirement for the program to continue any further, and it would be strange to imagine a political appointee of Trump using contemporary art to address race, inequity, and immigration. “Part of being successful is owning it and having it be authentic to you,” Heyman said. “This is authentic to me. I love it. It drives me. So if the next person doesn’t feel as passionate about this, they’ll feel passionate about something else. You can’t force a person to do it.”

Diplomatic missions require an almost monastic submission to the ephemeral, a certitude that, regardless of how much work is undone or forgotten, it mattered. Luckily, Heyman’s default mode is undeterred. “I think that I’m a builder,” she said, contemplating the work she plans to do after moving back home. “And Bruce is a builder. So we’ll keep building.”