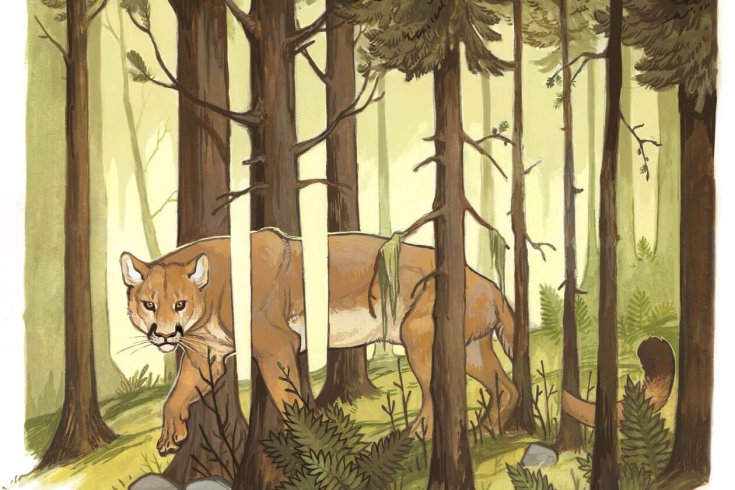 It was ten minutes to nine on a crisp fall morning in the woods near Mira, Nova Scotia, when Eddie Marr saw it. From his treestand seat, the hunter was scanning a clearing for deer when a tawny, muscular creature with a long tail entered his rifle scope. He couldn’t believe it: a cougar in Nova Scotia.

“My buddy said he’d seen it the day before,” Marr says. “I thought he was seeing things.” The animal’s tracks were too big, he thought, to have been made by a coyote, but maybe a lynx? Because of the distinctive swooping tail, though, he was sure it was a cougar.

Mark Elderkin, Nova Scotia’s species-at-risk biologist, heaves a sigh over the phone. “There’s no record of a cougar ever being in our province,” he says. But that hasn’t stopped the rumours. In 1985, a family on its way to Lunenburg apparently struck a six-foot-long cat with their car; seven years later, news broke in Cape Breton that a young cougar had fallen into a well and drowned—but when wildlife services arrived, the animal had vanished, leaving behind not so much as a tuft of fur.

Cougars once roamed from the tip of South America to the Yukon, and all along the eastern coast of the United States. But European settlers hunted the animals to near-extinction in many parts of Canada, shrinking their principal range to the western provinces. The last confirmed encounter with an “eastern cougar”—once thought to be a subspecies endemic to eastern North America—came in 1938, when one was spotted and trapped near the border between Quebec and Maine.

Yet sightings continued. The Canadian Wildlife Service began investigating these reports in the 1970s, and since then, nearly a thousand cougars have allegedly been seen in Nova Scotia. The Committee on the Status of Endangered Wildlife in Canada currently lists the eastern cougar as a “data-deficient endangered species”—they don’t have enough information to tell whether it’s died out. (In 2011, the US Fish and Wildlife Service proposed that it be declared extinct, as no evidence of a breeding population had been discovered in roughly seventy years.) But a genetic study of cougar populations published in 2000 suggested that “eastern cougars” as a genetically distinct subspecies never existed at all.

Typically, the mighty cougar loping through the bush turns out to be a foot-tall house cat cavorting in a stand of wild carrot.

As the official responsible for overseeing the province’s endangered species, Elderkin is tasked with investigating possible big-cat sightings. “I’ve met more extreme opinions on the subject of cougars than with any other wildlife I’ve been involved with,” he says. Every year, he receives twenty to thirty reports. The majority come from well-intentioned and credible sources such as Eddie Marr, but hoaxes abound: kids with two-litre pop bottles stomp out facsimiles of cougar tracks; implausible photos invite immediate skepticism. One photograph of a cougar supposedly killed by a car in Queen’s County showed a stack of mule-deer antlers in the background—a species, Elderkin knew, that doesn’t exist east of the Prairies.

While there is no physical evidence that cougars exist in Nova Scotia, Elderkin points out that it would be impossible to prove they aren’t out there. Tracks, hair, and scat were found in Ontario, and one cougar was killed by a truck in Quebec in 1996, suggesting the species might be pushing further east. But Elderkin believes such events can be linked to escaped exotic pets, probably from locations in the US, where laws governing the possession of large, dangerous wildlife are lax. Unlike in New Brunswick, however, where in 2003 a hair sample confirmed the presence of at least one North American cougar, Nova Scotia has come up empty. A decade-long study completed last year in Kejimkujik National Park, two hours west of Halifax, failed to turn up any results.

Still, Elderkin fills out a report every time he receives a call, as per the government of Nova Scotia’s “cougar investigation protocol.” If there’s reason to believe there might be hair, scat, or other physical evidence at the scene, Elderkin will send someone into the field. But his department spends a lot of time explaining the principles of perspective. “When you get the person on the spot, you ask them where exactly they were standing and where the cat was standing when they took the photograph,” he explains. “Then you get out the measuring tape.” Typically, the mighty cougar loping through the bush turns out to be a foot-tall house cat cavorting in a stand of wild carrot.

While no supposed evidence has yet withstood scrutiny, Elderkin never tries to discredit someone’s belief that they’ve seen a cougar. It’s the tension between the believers’ faith and the scientists’ skepticism that, three years ago, drove Steven MacLean, a retired library assistant from New Glasgow, to start filling a book with descriptions of a half century’s worth of the province’s cougar sightings—his latest passion for the strange and extraordinary. “I started with UFOs twenty years ago,” he says. Local alien reports began drying up, and MacLean found it difficult to trust much of what he read on the internet. “That,” he says, “is when I slowly slid into Bigfoot.”

Unlike Elderkin, who investigates only reports, MacLean goes out of his way to ask locals for their cougar stories; he once recorded approximately thirty in a single month. As was the case with his previous interests, he has found a community of like-minded people trying to reconcile stories of sightings with the absence of physical evidence.

When Eddie Marr saw his cougar, its tail gave it away. But even experienced hunters can be fallible and misinterpret what’s right in front of them. “By the time what we see with our eyes actually gets to our brain, a lot of information has been lost,” explains Morgan Barense, a cognitive neuroscientist at the University of Toronto and the principal investigator at the school’s memory and perception lab.

The brain relies on hypotheses about a given environment—a city, a forest—and uses them to understand the information it receives. Our minds fill in the blanks. We also recognize objects based on only a few features. If you see a handle, for example, you might expect to see a mug. And if you see a yellowish-brown tail swishing through the woods, you might expect to see a cougar— especially if you had thought about one recently. The fact that Marr’s friend saw one the day before may have primed Marr for the possibility he would see it the next. And when perceptions become memories, they’re even less reliable: the more we think about an event and tell others about it, the further away it gets from being an accurate representation of reality. A story changes in the retelling: a tabby cat becomes a cougar.

Alone in the woods, Elderkin has seen his share of inexplicable things. “But as a scientist,” he says, “I think it’s important to separate the lines between opinion, observation, and fact-based evidence.” MacLean, meanwhile, continues to collect stories, which he plans to forward to provincial scientists. Though he understands that no one has yet collected hair or scat or taken conclusive photos, he finds it hard to believe that so many credible witnesses—friends, neighbours, lifelong hunters—could all be wrong.

“There’s a degree of believability that’s not there with, say, a leprechaun,” he says. “And nobody’s seeing monkeys or leopards. They’re seeing cougars. Are we all that off in our perceptions?”

This appeared in the March 2017 issue under the headline “Bigfoot on Four Paws.”

Alexander Tesar is a former editor at The Walrus. His work has appeared in Nautilus, Hazlitt, and The Canadian Encyclopedia.
Mary Sanche

Mary Sanche is a science and nature illustrator.