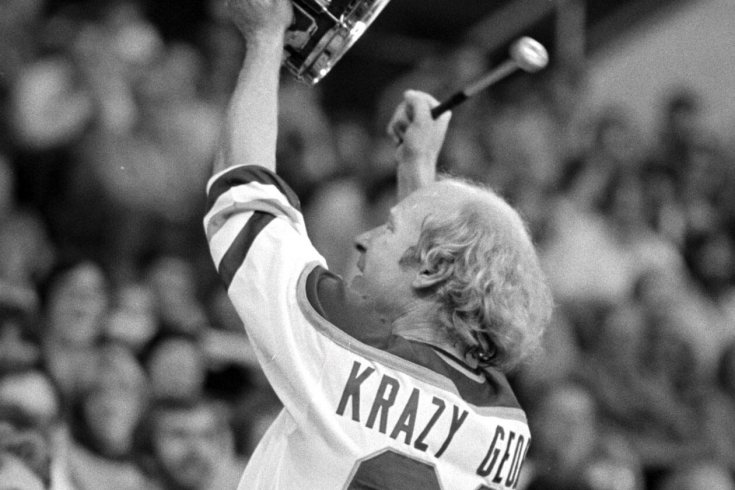 Today, the Edmonton Oilers will play their final game in the only arena the NHL team has ever called home. Rexall Place, the venue previously known as Skyreach Centre, before that as the Edmonton Coliseum, and earlier still—originally—as Northlands Coliseum, has housed the Oilers ever since the building opened its doors in 1974, back when the team was part of the now-defunct World Hockey Association. Today, it’s the second-oldest arena still used by the NHL, trailing only New York City’s Madison Square Garden.

But before the Oilers gather up their many championship banners and trophies (the good ones are all at least twenty-five years old, yes, thank you for the reminder) and decamp to their shiny new digs downtown, the organization has spent this season celebrating its beloved old barn and reliving some of its most memorable moments for a year-long series entitled “Farewell Rexall Place.”

Problem is, amidst the five Stanley Cups, and the miracle playoff run in 2006, and Patrik Stefan’s infamous whiff on an empty net, the team has completely skipped over one of the arena’s most lasting achievements. And not just within hockey, but across the entire world of pro sports. It was here, amidst a sea of copper and blue, where the Wave was perfected.

Back in the 1970s, a former schoolteacher named George Henderson discovered that he had the particular knack for riling up crowds at sports games. He was able to parlay that talent into paid gigs for teams across North America, armed only with a hand drum, a drumstick, and enough manic energy to power a small town. He once told Sports Illustrated, “I just don’t accept people not cheering. I say, ‘If you don’t yell, I’m gonna knock your teeth out!’”

In 1976, Krazy George, as he redubbed himself, took a full-time gig cheering for the Colorado Rockies of the NHL. One of the cheers in his rotation at the time involved getting three adjacent sections of fans to stand up, one by one, and each yell a single word of a timed chant. The Colorado version was supposed to say, “Go! Rockies! Go!”—except that one night a fourth section, who couldn’t hear Henderson’s barked commands to the closer groups, decided they wanted in on the fun, too.

“They stopped yelling, ‘Go!’ They just started screaming as they stood up,” Henderson, now seventy-one, remembers. For the rest of the game, he says, the cheer carried progressively farther and farther around the stadium. “So basically that was the first Wave,” he says.

There was only one problem: attendance. Even at their peak, the Rockies averaged fewer than 10,000 fans per game—good enough for dead last in the NHL. And as anyone who’s seen the Wave in action knows, all it takes is one disinterested half-filled section to make the whole thing fizzle out. “There weren’t a lot of games where I could do the Wave,” Henderson says. “There just wasn’t the crowd.” (Shortly thereafter, the Rockies relocated to New Jersey.)

Up in Edmonton, meanwhile, where the local NHL squad already routinely packed its arena to the brim thanks to the on-ice exploits of a lanky teenager named Wayne Gretzky, things were different. So when Henderson took a gig working a handful of games at Northlands Coliseum during the 1980–81 season, he brought his new cheer with him, and saw, for the first time, the phenomenon’s true potential. “It was sold out,” Henderson remembers of Northlands, “and when I did the Wave there, it looked spectacular.”

On that night, and over the games to come, Edmonton fans took notice—of this Krazy new cheerleader and this crazy new cheer. “When I think of Krazy George, I think of the ’80s,” says Tom Barrett, a retired reporter and long-time Oilers season-ticket holder. He remembers those early years watching Henderson conduct the crowd like a symphony as the Wave rolled around the arena, as well as the pop it invariably drew. “Most people liked it, that’s for sure. It got people going,” Barrett says.

Henderson’s antics also drew the attention of Peter Gzowski, who trailed the Oilers that season for his book The Game of Our Lives. In it, Gzowski describes this new trick, which didn’t yet have a name but was already a standard in Henderson’s repertoire: “He will start a cheer in one corner and then roll it around the arena, with each section rising from its seat as it yells.” The players, Gzowski added, “find it more distracting than encouraging.”

In fact, that depended on who you asked. “I can see it like yesterday,” says Kevin Lowe, the six-time Stanley Cup-winning defenseman and current vice-chairman of Oilers Entertainment Group. Thanks to less rigid barriers between fans and players back in the ’80s, Lowe remembers Henderson charging right down behind the Oilers bench screaming and pounding that little drum until his voice was hoarse. Lowe was a fan of the Wave, though he admits others may have found the cheer “a little gimmicky and hokey”—as if Gretzky, Messier, Coffey, Kurri, et al needed the help.

Once Henderson saw what the Wave could do in Edmonton, he started bringing it to larger and larger venues. On October 15, 1981, during a playoff game between the Oakland A’s and the New York Yankees, that the Wave made its debut on US television—and that’s where Henderson officially pegs its origin, since there he has conclusive video proof. (This is largely by necessity, as other groups over the years have tried to claim inventing the Wave before Henderson did. But none have produced a recording that predates this A’s v. Yankees game.) Ever since, the Wave has permanently raised the bar for audience participation at sporting events, for better or for worse. It caused such a sensation during the 1986 World Cup final in Mexico that outside of North America it’s known as the “Mexican Wave.” Many fans, meanwhile—Barrett among them—are adamant in their hatred of the Wave and how it distracts from the game being played. Undeterred, the cheer has rolled all the way into academia: In 2002, scientists from the University of Budapest found that a typical Wave moves clockwise, at a speed of approximately twelve metres (or twenty seats) per second.

Today, now that the Wave has established itself as a fixture of live sports, Henderson is happy to be largely retired from the cheerleading game. “Nowadays there’s a lot of cities that don’t need me,” he says. “They’re pretty rowdy. And at my age, I can’t dominate a crowd anymore. I don’t have the lung power.”

Still, even self-professed Wave haters wonder whether Henderson and his antics might have brought some luck into venues like Northlands along with him. Barrett is one of thousands of Edmontonians who’ve already secured their spots for season’s tickets for the Oilers’ first season at the new Rogers Place—when the troubled team may well set a new NHL record for most consecutive years missing the playoffs, at eleven. “I wait, and wait, for the glory days to come back,” Barrett says. “Maybe we can get Krazy George to come back, too.”

Michael Hingston (@mhingston) has written for Wired, the Guardian, and The Walrus. He edits the Short-Story Advent Calendar.