Shop Till You Transcend | The Walrus
Skip to content 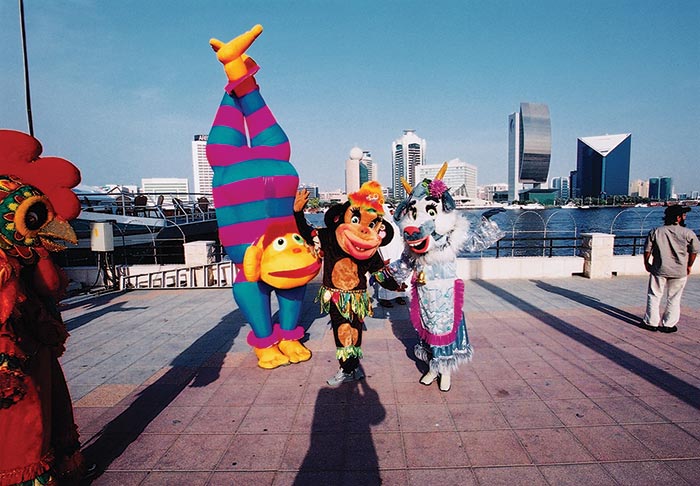 Performers at the Dubai shopping festival. Photograph courtesy of mydsf.ae

At this year’s opening-night festivities, the downtown streets were teeming with people. Official ceremonies were held on grounds a kilometre away but flashes of the pageantry appeared on jumbo TV screens. A giant billboard advertised the “World Famous Sale.” At nine p.m., the sky was drenched in golden bursts of fireworks.

It may be the first time that consumerism has been press-packed and marketed as a cultural phenomenon, deserving of its own festival, complete with a commemorative T-shirt. Usually the commercial spirit is an afterthought, an add-on to a more respectable tradition, such as Shakespeare or jazz. At the annual Dubai festival, consumption is the main event.

So, how does one “celebrate” the act of shopping in a way that goes beyond, well, shopping? With sales at the malls, certainly, but the Dubai Shopping Festival offers much more. The fireworks displays are nightly; there are stuntmen rappelling up high-rises, camel caravans, Harley Davidson parades, Ferris wheels, snake exhibits, drumming robots stilt-walking down the streets. There are mass weddings, with couples from various countries saying a very public “I do,” and competitions for “Best Haircut” and “Ideal Arab Mother.” And there are the raffles—for cars, gold bullion (forty-seven kilos of it), and hard cash, the equivalent of $1.68 million, to be exact.

Last year, almost three million visitors honoured the common art of shopping by dropping the equivalent of $1.9 billion on consumer electronics, carpets, and haute couture. This is more than a sale; this is Dubai flashing its gold-plated tail feathers to the world.

Dubai is one of the seven tiny states that make up the United Arab Emirates, situated in the south-eastern hook of the Arabian Peninsula. The coalition represents a haven of peace (and unrestricted consumer spending) in an unstable region; shopping is tax-free, and the import duties low. Dubai, the most internationally recognized of the Emirates, is populated by a cosmopolitan mix of affluent locals and expatriates giddy at the prospect of truly taxfree living.

The city boasts forty-three shopping malls for its 970,000 residents, making it third in the world in terms of retail space per capita (after the U.S. and Singapore).

The big-brand capitalist model in this newly wealthy Islamic state is more American than America itself. Some malls stay open till midnight to accommodate throngs of men in crisp white dishdashas who prefer Starbucks to Arabic qahwa, and women who wear Calvin Klein and DKNY under their black abayas. An acceptable, temperature-controlled alternative to the bar or the street café, the mall is becoming as central to life in Dubai as the mosque.

In a city where shopping is a national pastime, then, retail tourism is a natural industry. In 2002, Dubai hosted 4.1 million visitors, more than thirty-five percent of whom came from other Arabic states; that number was up by a million from the year before. The goal is to bring in fifteen million people in 2010.

The government also plans to quadruple the retail area in the city during the same time period, an increase of approximately fifteen-million square feet. Construction has already begun on the Mall of the Emirates, the world’s largest you-know-what outside North America, while, across the freeway, a rival firm is building the Burj Dubai, the world’s tallest tower, and the Dubai Mall, which plans to unseat the competition when it opens, in 2006.

International retailers have flooded the city. There are more than fifty highend Italian franchises alone, though some, like the Versace boutique, which opened in 1990, will not survive the year. (“Consumers are confused here,”the owner of the store said, “because there are too many options to be loyal to one store. [There’s] too much competition for me to stay in business.”)

Across the Gulf, competition has turned the region into a pan-cultural shopping paradise. Centres such as Bahrain, Beirut, Jeddah, and Riyadh are building more and ever bigger malls to attract enough tourists to support the exponential growth in retail development. When the Villa Moda shopping complex opened in Kuwait, in 2002, Botox bar and all, it was the international fashion event of the season.

But so far, Dubai is the only one to dedicate a month-long international festival to the pursuit. By late January, Week Two of the Dubai Shopping Festival, organizers were getting ready for the next event on the slate: Dubai Fashion 2004. Among the luminaries expected was John Galliano. The British designer’s spring/summer line for Dior, a Festival release noted, would recreate in Dubai the “opulence of the Nile,” focusing on “freedom of expression [and] strongly associating the designs with the magnificence of the Pharaohs.” Now, that’s cultural cross-pollination.

Carey Toane is an academic librarian and poet. She lives in Toronto.