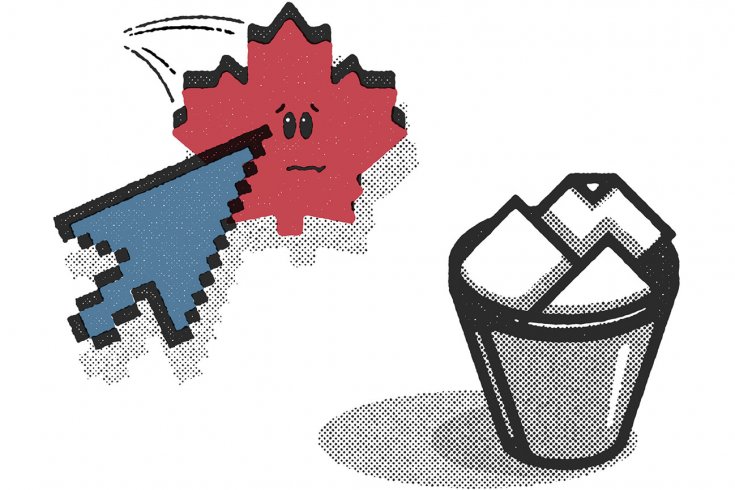 Last fall, the Canadian Radio-television and Telecommunications Commission held a series of hearings. Government officials and industry representatives discussed cable-channel bundling, Canadian-content requirements, and the people’s right to watch American Super Bowl commercials. But one message in particular came across loud and clear: media giants are afraid. Online video services such as Netflix are imperilling the old-fashioned business of television.

In the press, the hearings were framed as a battle between old and new: the ossified CRTC versus the Internet; powerful incumbents versus digital innovators. This narrative was especially evident in discussions of the proposal, floated by the CBC and other Canadian broadcasters, that streaming services contribute a percentage of their revenues to support productions in this country. Though the CRTC claims it has the right to regulate Netflix under the Broadcasting Act, a 1999 exemption for “new media broadcast undertakings” actually absolves the company of such responsibilities. For now, unlike traditional outlets, online video companies don’t have to maintain a certain amount of Canadian content, meet Canadian expenditure quotas, or chip in to the Canada Media Fund—a non-profit that supports local productions and is financed by mandatory annual contributions of 5 percent of cable and satellite operators’ gross revenues. These exemptions have held even as digital companies have started to pour resources into original programming—see, for example, Netflix’s Orange Is the New Black or Amazon’s Transparent—blurring the line that once separated them from the old guard.

The hearings grew dramatic—even a bit bizarre—when Netflix was called to testify. Corie Wright, its director of global public policy, refused to reveal how many subscribers the company has in Canada or how much money it spends producing Canadian content. In response, CRTC chairman Jean-Pierre Blais walked out of the room. When he returned, he reminded Wright that disclosure of such information is essentially the only condition of the exemptions that streaming services enjoy.

Despite the company’s obstructive attitude, most commentators sympathized with Netflix. But while it may look like an underdog compared to Rogers, Bell, Shaw, and Telus, it’s not. With total revenues of more than $5.5 billion and a market capitalization of $29 billion, it’s in expansion mode, already operating in nearly fifty countries and entering new markets at breakneck speed. Given its growing wealth—little of which trickles down to independent filmmakers and distributors—the idea that it should be spared any regulatory burden seems a bit rich. This is especially true when one considers that, in addition to the new-media exemption, it benefits from other regulations—especially the CRTC’s ongoing commitment to Net neutrality, the principle that all online information should be treated equally. Without Net neutrality, companies such as Rogers or Bell could squelch Netflix by slowing down the site’s traffic, or by not counting their own video offerings against cellphone data plans. Chipping in a percentage of revenue to support Canadian creativity seems a small price to pay.

In Canada, government involvement in the cultural sector has a long history. It began in 1849 with postal subsidies for books, newspapers, and magazines, and picked up steam through the twentieth century. CBC Television was established in 1952; in 1968, the CRTC was set up to regulate communications. The ’90s were a pivotal period in cultural policy, with the Department of Canadian Heritage founded in 1993 to implement and oversee programs such as the Canada Council for the Arts and Telefilm. At the same time, the growing popularity of cable led to an assortment of new rules and initiatives, including media-production funds. All of this was based on a simple, fundamental tenet: the state has a legitimate role to play in regulating broadcasters and supporting culture.

Now we’ve entered another period of technological transformation. By allowing content to cross international borders easily, the Internet pokes holes in the system designed to subsidize and defend local industry and talent. “We are in a changing world,” says Monique Simard, the president of Quebec’s Société de développement des entreprises culturelles. “First, territory doesn’t matter much anymore: you have access to people and they have access to you. Second, the consumer completely decides what they want to see, when they want to see it, and if they want to pay.”

Indeed, in March the CRTC revamped its Canadian-content rules, drastically slashing those requirements for non-prime-time viewing. Blais claimed his goal was to create “an environment where Canadians want to watch content made by our creators—not because it is forced upon them, but because it’s good.” But as the Globe and Mail noted, his hand was forced by something beyond his control: “a fast-changing technological environment that has upended TV’s business model.”

Yet the digital sphere isn’t the even playing field some make it out to be. Canadians often dismiss our own film and television productions as subpar, but the problem is structural. As the world’s leading exporter of entertainment, the United States doesn’t need expenditure requirements or content quotas. Instead, it uses other tools to maintain its dominance, including state tax credits for film production, aggressive copyright protections, mechanisms for fighting online piracy, and international trade agreements. In Canada, by contrast, even the largest players are at a disadvantage. The CMF’s entire $368 million annual budget is less than that of some Hollywood hits. In Blockbusters and Trade Wars, Toronto lawyer Peter S. Grant investigated this predicament: American films that are obscenely pricey to make are still cheap to reproduce, which means it costs less to import expensive US culture than it does to create something original at home, even if it’s comparatively low budget. The supposedly democratizing power of the Internet does little to address these kinds of broader imbalances.

Meanwhile, Canadian media companies invoke the American threat to justify consolidation here at home. To compete, the logic goes, they need to be big. As a result, our media landscape is highly concentrated and vertically integrated. Rogers, Bell, Shaw, and Telus are all both broadcasters and telecommunications providers; they simultaneously produce content and control the channels through which it’s distributed, making it hard for independent outlets and creators to survive. Compounding the problem is the fact that these companies contribute to the CMF while also serving as its gatekeepers; a broadcast deal is required to trigger investment in a production. The documentary community has been arguing for years that relying on traditional television deals to unlock financing makes no sense, as there are now countless other ways to connect with audiences online.

All this underscores just how much the supposed showdown between the CRTC and Netflix leaves out. Not only does it disregard underlying issues such as consolidation; it also ignores the way these problems have carried over into online space. On the Internet, info monopolies emerge thanks to something called network effects: services are more useful when more people use them (1.39 billion people are on Facebook mainly because 1.39 billion people are on Facebook). At the same time, vertical integration is on the rise. Google, for example, is a search engine, an advertising company, a broadband provider, a maker of operating systems, and—like Amazon and Netflix—an investor in original programming. Digital-media companies have more in common with legacy corporations than they’d like to admit.

Moreover, while they claim to represent a break with old models, digital companies often behave contrary to the values of openness and transparency the Internet revolution was supposed to herald. It’s never been easier to count clicks or marshal analytics, but because data is power these companies won’t share commercially valuable information with creators or regulators. All this serves as an important reminder: we shouldn’t shape policy based on the self-serving bluster of tech companies.

The choice between the CRTC and Netflix is a false one. Of course twentieth-century broadcast rules don’t map perfectly onto the twenty-first-century media landscape. But instead of simply abandoning what exists, we should reconsider the entire communications system from the bottom up. This must begin with keeping the infrastructure of the Internet free and open, and end with public investment in the creative work that flows through it. In Canada, that means maintaining a commitment to Net neutrality and bolstering institutions such as the CBC and the National Film Board. Why not fund them with contributions from streaming services such as Netflix, as well as from Internet and cellular providers, which also get a pass under the current framework?

When it comes to demanding that tech companies support homegrown creativity, France is leading the charge. Google, Amazon, and Netflix use clever accounting to reduce their tax burdens or avoid them outright (Netflix, for example, pays no taxes in Canada). But France is not only looking into taxing them more effectively; it also has proposed a 1 percent levy on smart phones and tablets to boost its audiovisual sector. (Apple has $178 billion in cash reserves. It’ll be okay.) And while the French government will not block or limit access to foreign films, it has demanded that Netflix invest in original local content, and that it carry and promote it accordingly.

Canada looks set to take a different route. Prime Minister Stephen Harper has declared his firm opposition to a “Netflix tax,” and despite the tense hearings the CRTC has indicated it will continue to take a hands-off approach. The old model was far from ideal, but some elements are worth salvaging. The challenge is how to devise policies that take advantage of all the digital world has to offer—without handing over our cultural future to Silicon Valley.

Astra Taylor wrote The People’s Platform , one of the Globe and Mail ’s best books of 2014.
Michael George Haddad