Raptors, Race, and Belonging | The Walrus
Skip to content

In June, a nation bore down on Nathan Phillips Square under a hanging sun, hundreds of thousands clad in patterns of red, black, and gold. It arrived with babies in mothers’ arms, fans cheering beneath concrete arches, steel-drum processions winding through the memory of morning. All the while, police held their positions, thirsty and waiting, their barricades broken and surmounted. The locust of a helicopter rattled overhead; the thunderous flyby of Snowbirds spread awe as necks craned skyward. And, after hours of waiting, the energy of expectation crested, and before us appeared the 2019 NBA Champion Toronto Raptors. We the North had arrived, championship in hand, the stage set for the one person everyone wanted to see: Kawhi Leonard, the king of the north.

The faces of those who celebrated reflected journeys beyond hopes and dreams, beyond polite expectations. This victory was bigger than one NBA championship: it was the sum of countless journeys from margin to centre, from there to here, and all the sacrifices made in between. Sacrifices of language and land, sacrifices of children and families, sacrifices between generations, trauma handed down like dominion, understanding ceded to security and the promise of a better future. This country was built on the forgetting of the first accord of friendship and the persistent erosion of both sacred knowledge and space—the very disappearance of those who hold such knowledge. The victory of one basketball team cannot fix this. But it can demonstrate what may come next.

I was there when the new nation arrived. It was apparent then as it is now, at the cusp of a new basketball season, what the Raptors’ victory meant for this country. We live in a country that does not recognize Indigenous peoples, that routinely others people of colour, and that is marred by anti-immigrant billboards. The nation will not stand for that. It is not bound by the country’s old solitudes. It marks a departure from what was there before to what is here today. The outsiders have become insiders. And when the new NBA season begins, on October 22, a championship banner will hang from the rafters of Scotiabank Arena in Toronto. A banner that is a symbol of the nation’s rising power.

This nation is not bound to the white-supremacist roots of former prime ministers John A. Macdonald and Wilfrid Laurier. It is not simply a new face for the country. This new nation has the power to change the very direction of the country. A little over a year ago, most of the country didn’t know much about Kawhi Leonard. Today, he’s the one who helped give the country its first Big Four sports championship since Kim Campbell was prime minister. The celebration parade this past summer in Toronto was likely the largest civic celebration in the country’s history. Millions were there. There wasn’t the typical maple-leaf hoopla, or the laissez-faire furor of July 1, or even the corporate nosedive that accompanies the Olympics. This was authentic. It was a surprise. It had been earned. And this nation poses fundamental challenges to consent and choice: the choice of where this country is going and what it will become.

The dreams of millions in this country have rarely, if ever, hung on the desires of one American, one athlete, one hero. Kawhi Leonard’s journey from the periphery to the centre of the national interest is without comparison. Despite his decision, as a free agent this summer, to leave the Raptors after the team’s NBA victory, there are children across the nation who worship him. He showed them that the power of a dream, a ball, and a court can achieve the unprecedented. That old orders can be overcome.

Heroes often operate within binaries of opposition: good versus evil, the familiar versus the othered. Sometimes this opposition is oblique; other times it is violently clear. Authority determines who and what a hero is through means stronger than simple morality and taste. Power gives affection to that which is allowed to be heroic and casts judgment on that which challenges that power. This has been true in this country since Macdonald and Louis Riel. But times are changing—along with buildings, bridges, and memorial statues that honour cruelty. Through the clarity of justice and the erosion of hegemony, heroes of previous generations are giving way to new heroes.

It is a reconciliation of sorts. But one that is slow and winding—a journey weighed down by the heroic binaries composing the country’s virtue. Leonard upends the weight of those binaries. For those who still believe in old solitudes, yes, he is still one of them: an American, a basketball player, a Black man, an outsider playing an outsider’s game—if not in origin, then in perceived culture and verve. But, for a great many more, he is part of a greater us: heroes who belong to this new nation, one whose name has yet to be spoken.

That is why Leonard’s decision to leave the Raptors, and the intense speculation and hand wringing that preceded this decision, says a lot about the country. It says a lot about those who have choice in the country and those who do not. Many in the country expressed understanding about Leonard’s decision to leave Toronto for his home team, the Los Angeles Clippers, to sign a three-year contract reportedly worth $103 million (US). They contended he had every right to leave. That attitude is reflective of the settler yearning for a homeland—the proverbial “old country” many are desperate to hold on to. The violence of these dreams of home is apparent in the ranks of who is not included. When people talk about the old country, they mean places in Europe, often the British-French axis. When they utter the xenophobic mantra, “Go back to where you came from,” they never mean go back to the old country. They mean another country, another other. The old country does not refer to any home in Asia, Africa, Central or South America. And it certainly does not include Indigenous peoples.

Leonard’s decision to leave for America follows a path similar to that of other sports superstars, such as Wayne Gretzky, Vince Carter, and Roberto Alomar: taking all of that talent and heading south. But, as much as the country may lament it, that metric, from here to there, is the foundational direction of the country’s economy: logging, mining, the mass extraction of water—this is still largely a staple economy. The question of whether that is good, desirable, or even sustainable is at the heart of many political challenges facing the country. Indeed, the fight over pipelines is really a rehash of the debate over Macdonald’s 1878 National Policy—the essence of which continues to hang over our country. All of that is why Leonard’s choice to leave the country was so symbolic for many in the nation. It is a choice that my nation has yet to make.

For the past 150 years, my nation, the Ktunaxa Nation, has met a long line of Crown representatives who each display a continually fickle attention toward our apparent best interest. From the first desperate, hungry, and lost representatives of the Crown who crossed the Rockies to our lands to the most recent “sunny ways” delegates, Ktunaxa have had little choice in the relationship. The country wants all and will settle for nothing less. If that means our demise, well, so be it.

At first, the very idea of a country seemed inane. But, as the slow tide of settlers turned from camps to towns, a new and inevitable reality emerged: an inescapable country that would trump our nation at every turn. Our nation was no longer able to live anywhere within Ktunaxa ʔamakʔis save for on small reserves established for our polite extirpation. The only choice for our nation was this: whether we would live through the genocide, our minds and bodies warped by those intent on converting, controlling, or condemning us—survival in some regards but not without a continuum of brutal consequences. And now, against a mantle of child rapes, cultural genocide, and old-fashioned racism, we have done the impossible. Our nation survives, in spite of the country.

So when I consider the old country, I think expressly of Ktunaxa ʔamakʔis—our territory. This land is our home, and we are not going anywhere. We do not have an old country to return to. We have a nation without a country. A nation that is threatened, as we are, denied and despised.

I do not believe in the country. When its anthem played at the end of the Raptors celebration parade in June, I didn’t stand. Hu n̓ini Ktunaxa. I am Ktunaxa. As Ktunaxa, I do not have the power to choose the country. It has chosen me, chosen Ktunaxa lands, claimed Ktunaxa history, memory, and time as necessary resources to exploit; it is genocide in action. My understanding of the country is forged through long, violent intergenerational conflict. There is no ambiguity. For more than a century, the country has taken everything from Ktunaxa: land, language, children, hope, prosperity. Everything is still being taken from us—by and for a country that barely knows our name.

The emergence of a new nation after the Raptors’ win does not represent justice as an inevitable destination. It is simply another path forward—one that may not be mired in the struggle of surviving an ongoing genocide. The nation offers questions about what may come rather than conclusions about what has been. Somewhere in that space, we may find a place to exist.

It is remarkable when a person of colour has the power to command the attention of the country, to have an offer of unprecedented riches, privilege, renown, and record levels of adulation from Danforth to Eskasoni, from Ottawa to Attawapiskat, from Victoria to ʔaq̓am. But what is even more incredible is to see that offer for all that it is, to see the country for what it represents and for what it is—and be able to reject it altogether. That is what Kawhi Leonard’s choice means for the nation: the power to reject the country for something else. In the aftermath of that choice, a new nation awaits.

Troy Sebastian / Nupqu ʔa·kǂ am̓ is a Ktunaxa writer living in Lekwungen territory. His writing has appeared in The Malahat Review, The New Quarterly, and Quill & Quire.
Nyle Miigizi Johnston 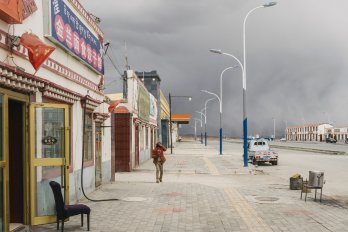