China’s New Deserts | The Walrus
Skip to content
The streets of Madoi County, a settlement near the source of the Yellow River, are often deserted.

From Madoi County, a settlement near the headwater of the Yellow River, our two-car convoy headed out to visit a desert Yang Yong first viewed through binoculars in 1997. At the time, the geologist had seen a small, wind-blown patch of sand surrounded by greenery. This time, Yang looked out past a stretch of sloping grassland to where a new desert extended beyond the horizon. That sandy expanse, Yang told me, was where we would spend the night.

Yang, now sixty, is one of China’s most prominent environmentalists. For nearly thirty years, he has studied environmental changes in the Tibetan plateau, in particular the region where the Yellow, Yangtze, and Mekong Rivers originate. Using satellite images, remote sensing, and data collected on expeditions, he and his crew are documenting the degradation of lands along the headwaters of China’s major rivers. In May 2018, I joined Yang on an expedition to capture the transformation of the Yellow River and its surrounding landscapes.

We piled into our cars and drove off the road, with Yang’s yellow SUV leading the way through the grasslands and down the side of a hill. With no obvious route, the uneven ground caused the car to jolt so violently that some of our heads hit the roof.

Partway, Yang stopped the car and got out. It looked like he had changed his mind about driving any farther. He lit a cigarette, taking long drags as he contemplated the rough terrain ahead.

Shortly afterward, Yang got back in the car and told us to buckle up. With a series of deft manoeuvres, he slalomed down the hill, twisting the vehicle like an Olympic skier. I thought that, when we reached the sand, the rest would be easy. But, almost as soon as we did, our tires spun freely. We got stuck.

There are many forces causing desertification on the plateau, including natural physical processes, human mismanagement, and climate change. The land, which ranges from semiarid to arid, is unable to sustain high densities of human and wildlife populations, while the high altitude and dry climate can make it vulnerable to wind erosion. Rising temperatures accelerate the melting of permafrost, exposing once-frozen topsoil to winds and burrowing rodents. Some claim that overgrazing has contributed to the damage. The Tibetan plateau’s water cycle is also under severe stress, with shrinking glaciers, expanding lakes, and overflowing rivers in some parts.

Yang hopes his research will help officials protect the Sanjiangyuan, a nature reserve established in 2000 to protect the headwaters of the Yangtze, Mekong, and Yellow Rivers. He is careful not to criticize government officials for their mismanagement of natural resources; instead he shares his findings with them. By involving them in his work, he tries to influence rather than challenge them. To Yang, when it comes to the environment, diplomacy is far more effective than shame.

This story was produced with support from the Pulitzer Center

Ian Teh is a Kuala Lumpur-based photographer. His work has appeared in National Geographic, The New Yorker, and Mother Jones. 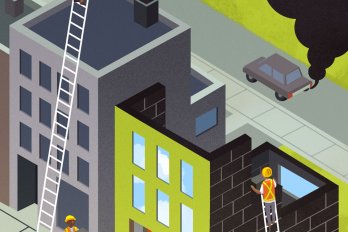 The False Promise of Green Housing