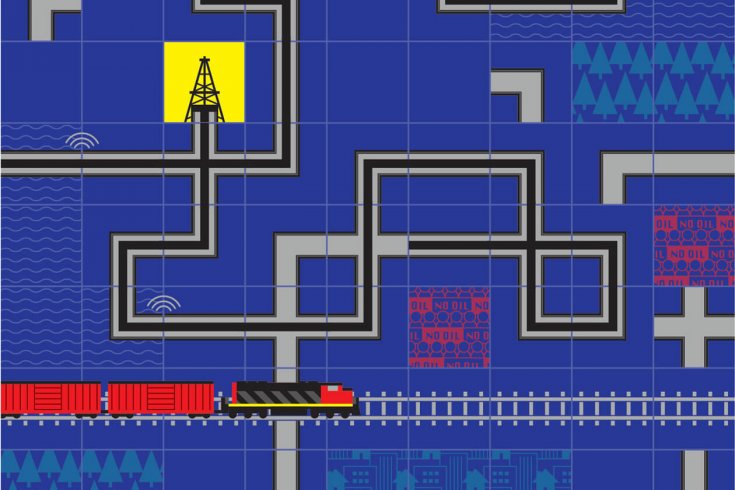 In July 2015, near Fort McMurray, Alberta, 5 million litres of bitumen emulsion leaked from a pipeline at CNOOC-Nexen’s Long Lake facility and spilled over an area the size of two football fields. There have certainly been more destructive pipeline leaks: this one was largely contained to the adjacent land, and the oil didn’t make its way into any significant body of water. It ended up killing just five birds, twenty-five frogs, and eight rodents. And yet, for an industry desperately trying to reassure the public about the safety of its operations—an issue front and centre thanks to Justin Trudeau’s November 29 announcement of cabinet approval for the expansion of Trans Mountain and the upgrade of the Line 3 pipeline—the Long Lake spill remains profoundly unsettling. The rupture occurred in a high-pressure, double-layered section of pipe that had been installed barely more than a year earlier, and was outfitted with leak-detection technology. But that technology didn’t identify any problems—instead, the leak was noticed by a contractor who just happened to be walking near the site.

A decade ago, pipelines were viewed simply as unremarkable pieces of infrastructure, no different from sewers or electrical transmission lines; in the wake of the 1989 Exxon Valdez disaster, most negative public attention focused on ships. The safety record of pipelines was—and is—a mostly enviable one. According to the National Energy Board, the approximately 73,000 kilometres of federally regulated pipelines that move around 1.3 billion barrels of crude oil annually in Canada lost an average of 1,084 barrels—the equivalent of a cup over the length of a football field—to spills each year between 2011 and 2014. When incidents do occur, the vast majority take place within tank farms, loading stations, and other well-prepared sites where they can be cleaned up easily, with minimal effects on the environment. But it’s the remaining small fraction of total barrels spilled that has sparked a battle between those who favour pipelines and those who oppose them—and created an opportunity for entrepreneurs.

Steven Koles is the president and CEO of Calgary-based Hifi Engineering, a company whose technology would almost certainly have prevented the leak at Long Lake. Its fibre-optic cables, which are installed alongside pipelines, sense minute changes in temperature, pressure, and acoustics and relay real-time data to operators. This information allows them to respond to problems within minutes and to address weaknesses or leaks before they turn into something that requires a cleanup crew and a crisis-management PR team. Hifi has deployed its technology in what Koles calls “high-consequence areas”—river crossings and hillside erosion zones, for example—and while its installations so far have been limited to stretches of pipeline less than forty kilometres long, he says they’ve been asked to present proposals for more extensive systems.

The cables cost between $10 and $15 per metre, Koles says, meaning that a company operating a 100-kilometre pipeline would recoup its investment through sales in just ten and a half months. But more important is the technology’s ability to prevent spills—a feature that could help companies reassure Canadians who are increasingly uneasy. “I’d say the industry has lost some face with the public,” Koles says. “I think there’s an expectation that you have to do more to achieve 100 percent safety.”

For Randy Meyer, the vice-president of corporate development and logistics at Altex Energy, the answer to safer shipping may be taking the product out of pipelines altogether. The industry, he says, should be looking to ship more by rail, and his firm currently has the capacity to move 154,000 barrels per day that way. This suggestion could raise serious concerns—calling to mind as it does the Lac-Mégantic rail disaster of 2013, in which an unattended seventy-two-car freight train crashed and exploded in the Quebec town, killing forty-seven people. But Meyer isn’t proposing to ship the kind of oil carried by tanker cars. Instead, he wants to ship “neatbit”—essentially raw bitumen without the added diluent that allows the product to flow through a pipeline. After all, he says, it’s the diluent, not the bitumen, that’s the problem.

“You take a product that is very difficult to set on fire—the flashpoint of bitumen is north of 200 degrees Celsius—and when you add the diluent, you lower that flashpoint to about room temperature,” Meyer says. Altex’s website features a video in which Meyer tries, unsuccessfully, to set some of the raw bitumen alight with a blowtorch. “It also flows a lot like molasses or very thick honey, so it’s not going to flow out into the environment,” he says. According to Meyer’s analysis, shipping neatbit by rail from Alberta to the Gulf of Mexico—a corridor with pipelines that rely on coal-powered electricity—would produce fewer greenhouse gas emissions than moving heavy oil through a pipeline. The energy efficiency of the journey, he says, is equivalent to a “good-sized SUV” driving the 300 kilometres from Calgary to Edmonton on 1.5 litres of fuel. And the emission profile of this mode of transport is enhanced by the fact that moving raw bitumen by rail doesn’t require the construction of new pipelines—the environmental cost of building the infrastructure is already sunk.

Meyer isn’t the only person touting the environmental benefits of moving raw bitumen by rail. Cal Broder has spent the last year trying to sell the energy sector on BitCrude, a proprietary technology, developed over the course of a decade, that transforms pipeline-ready bitumen into a solid product—as soft as a brick of butter or as hard as a lump of coal—that can be put into shipping containers and moved to port for export. “I think most people are more afraid of the movement of oil than they are of fossil fuels themselves,” Broder says. It’s the movement, after all, that creates the most immediate risks, be it exploding rail cars or pipelines that dump their cargo into rivers and streams. But BitCrude doesn’t present those risks, given that it can’t explode, is incapable of spilling, and doesn’t mix with water.

A number of options, then, offer the possibility of safer oil transport—there’s just one problem. The energy sector just doesn’t seem interested in deploying new technologies. It took decades for the industry to adopt steam-assisted gravity drainage in oil sands, a technique that is now standard. “In other industries, there’s such a thing as a first-mover advantage,” Koles says. “You get to something before somebody else, and that innovation makes you more competitive.” But because of the industry’s cautious approach to change, the energy sector is a place where everyone is content to be second—and nobody really wants to be first. Broder has run headfirst into that reluctance when trying to convince companies to give his product a try. “It always goes back to, ‘It’s impossible.’”

But no matter how much technological sophistication goes into a given pipeline or line of rail track, it’s impossible to guarantee a zero-incident record. “I don’t think that there’s anything that anybody could do that would be 100 percent without risk,” Meyer says. “The question is whether you’re at the first decimal place of risk or the twenty-fifth decimal place.”

Meredith Holigroski is the senior designer at The Walrus.