Philosopher Up to Bat | The Walrus
Skip to content 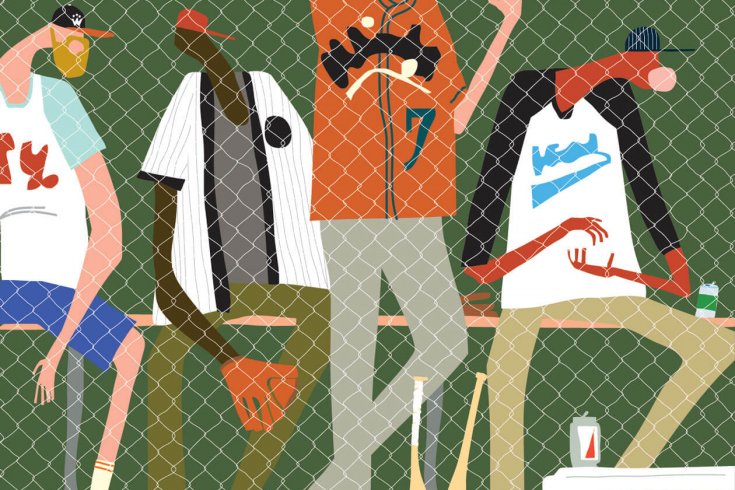 Ihave played baseball at most stages of my life, usually very badly, and I have loved it for even longer and with considerably more success. The two things are not unrelated.

Baseball is a difficult game to be good at, at any level. Chubby and somewhat indolent as a child, I didn’t make a full Little League team at any point, nor did I play for my high school or college. I played T-ball in elementary-school gym class and stood cluelessly through grade-four games in which no throw was ever caught. I played sandlot ball on the empty blocks of seaside towns when I was ten, on summer-abandoned schoolyard diamonds made of gravel when I was thirteen, and on beautiful grass swards of university-campus land when I was nineteen, where the best part was the draft-beer sessions afterwards. I have played for college-newspaper softball teams, for pickup sides composed of Sunday-morning louts with expansive insult lexicons, for corporate fastball teams with no morale or talent whatsoever (one involved a bunch of newspaper sportswriters who could not play sports), and for scrub teams of every shape and size.

The only “uniforms” I ever possessed were (1) a red T-shirt advertising the Loewen Windows fastball team, some housing outfit based in Steinbach, Manitoba (just checked—it’s still a going concern); (2) an orange Globe and Mail T-shirt from an ill-advised advertising campaign of the 1980s; and (3) a white T-shirt with blue three-quarter sleeves that bore the script logo “Varsity Thunderbirds.”

I love baseball. It is the Sabbath, the soul-saving time out of time, the space of sacred observance.

This last name was based on an inside joke among the staff of a student newspaper at the University of Toronto. On that squad of nerds and student-politics hacks, I fielded neurotically but adequately at shortstop and managed to hit the opposite way against my natural left-field pull thanks to some fancy footwork at the plate. On the Globe softball team, bizarrely competitive—as these “casual” leagues so often are—there were few notable moments. The mustachioed goons from the tabloidy Toronto Sun gave us routine ass-kickings, complete with crybaby sound effects and Bronx cheers aimed at our paper-of-record pretensions. Meanwhile, the natural athletes over at the Toronto Star—Hemingway’s old paper, as they never tired of pointing out—were just better than everyone else.

The Globe team had two good players: our catcher and my friend Jim Davidson, a sportswriter who had recruited me for the team. Jim was old school. He liked to call the newly opened SkyDome—a marvel of futuristic retractable-roof engineering on the scale of the evil-genius lair in Moonraker—“the yard.” As in, “I’m going down to the yard to catch the game. Wanna come?” Charmless old Exhibition Stadium, which predated the Dome and had witnessed snow-dusted home openers and bone-chilling late-season games, was universally known as the “Mistake by the Lake.” It didn’t even deserve to be called a yard, let alone a field.

Jim once fielded a pop-up along the first-base line by running full tilt into foul territory, Jeter-Donaldson style. He neatly snagged the ball and then plowed into the cyclone fence so hard that a pattern of chain links was cut into his thigh. Diamonds on the diamond. He was a good player, fearless and tough. The catcher was good, too. The rest of us were pathetic. That Globe team boasted a pitcher from the press room—an old guy missing a finger on his right hand, possibly as a result of some tiff with the offset-printing monster machines that resided in the basement of the Globe building on Front Street. It was rumoured that this actually allowed him to put some sort of occult spin on the ball, but I never witnessed this particular brand of magic. He was like R. A. Dickey or Tim Wakefield marshalling the capricious knuckleball: some days the pitch was there—others days, not so much. We had lots of those other days.

Like most of us, I have a snapshot album full of memories and near-memories. I caught a few decent games for a student team that took on the staff and priests of my Catholic high school in the late 1970s. I once threw out a trunk-dragging Jesuit at second to end a game. Unhitch the trailer, Padre! I had a decent arm then, at least with a softball. But I confess that I was also a bit of a jerk on the field, and at this late date, I ask Father Dave Nazar, who was then a bearded young priest-in-training, and Mr. Larry Franz, my brilliant physics teacher, to forgive me my trespasses. Father Nazar is these days, I see, a big wheel in the Vatican, and I hope he doesn’t remember that time, with their side batting skins in a shorts/skins game, that I tried to rattle him at the plate by noting that he was “scrawny and pudgy at the same time.”

Nothing ever came of my baseball career, except the stone-cold knowledge that “career” is a wildly inappropriate word for it. But I loved playing baseball. And watching it. And thinking about it. Another snapshot, a sort of aimless home-movie clip that lodges in my mind for no good reason except that it is about baseball: my older brother Steve and I, bored on a family camping trip across the Prairies, find ourselves with a little free time in some Podunk town between Winnipeg and wherever. North Battleford? Estevan?

Bored out of our minds, we hung around the main street and then spotted a couple of teenage boys in baseball uniforms. They had gloves and a bat, and they were older than we were. They seemed to be heading somewhere with a sense of purpose—men at work—so we followed them. I know that probably sounds weird, but we were so bored. If they were going to a baseball game, life might be interesting for an hour or two. We trailed them along the street and down a couple of side roads toward what looked like a municipal park. There were two diamonds in opposite corners of a big field. Yay! Baseball!

There was no one else to be seen. The diamonds were empty, the outfields deserted. No canvas bags of bats and balls, no chatter of pepper-playing athletes, no smack of ball into glove. Nothing. The two kids crossed the field and disappeared into a residential neighbourhood on the other side, like ghosts of disappointment and not at all like the old-timey players who wander into the tall corn in Field of Dreams—the film loosely based on the novel Shoeless Joe by Canadian Prairie writer W. P. Kinsella, who died while I was writing this. Neither film nor book existed when I walked the dusty streets of Estevan, if that’s where we were, and neither contains much of the flat, unforgiving grimness that pervaded that landscape. If you build it, will they come? Maybe in the cornfields of Iowa. In Saskatchewan, they had better get ready for disappointment and bring a jug of Kool-Aid.

I find it hard to convey the depth of everyday despair that freighted the look Steve and I exchanged at this moment of failure. No game, no strikes and misses, no grounders to short, no home runs. Nothing. We trudged back to meet our parents and head for the next campsite, where Steve would begin an epic protest bout of solitaire playing in the trailer, not emerging except for meals and bodily relief over the next many days. I lacked his commitment to protesting boredom with boredom and found solace in swimming whenever I could.

Why do we love baseball? It is not an easy question to answer. Is it the beauty of the field’s abstract geometry, its linear refusal of territory and conquest? Is it the preternatural grace of the players, who have physiques superficially akin to our own—not the behemoths of football or the off-world giants of basketball—but are so far advanced in skill, speed, and judgment? Or is it the sheer difficulty of the game, which started as a sort of picnic diversion and advanced ever further toward the vanishing point of coordinated perfection?

They say hitting a Major League fastball is the hardest feat in sports. But then, hitting a curve is harder, the graveyard of talented but limited hitters. How about tracking down a screaming fly to right? Or fielding a hot shot to second and then softly tossing the ball in pursuit of a 4-6-3 double play? And what about a double play, anyway—or, for crying out loud, a triple play? We can only hope to witness a few of these, if any, in a decade. What the hell does that say about this game that seems so casual in design, but proves so devilish, fascinating, and sublime in execution?

I love baseball. It is the Sabbath, the soul-saving time out of time, the space of sacred observance. The waiting is everything. A pause in baseball is always pregnant. A stoppage of play in any other game, in football, say, is just that: nullity without expectation or drama. It’s not play bracketed by the game, merely play suspended by the clock. Can you love a pause? Can you love a logic of pauses? Can you love a game whose essence lies in the motionlessness that opens up between motions and gives them meaning?

But explaining why is like trying to convey in words the exaltation one feels when Glenn Gould plays music by William Byrd or Orlando Gibbons. No love so intimate and personal, so wrapped in biography and mortality, is ever easily shared. They say that Lucifer, before the celebrated prideful Fall, was the anointed guardian of music in heaven. Now there is an image for the poetic among us! Baseball is the heavenly, devilish music of the physical world. Our love here is a complicated, implicated property. Angels in the outfield, sure. Devils, too.

I try to parse this love, so bound up with my life and sense of being here. I fail, of course, because the recurring lesson here—as so often—is failure. And sometimes it is better to try not to try, that deeper and more complicated metaphysical lesson. If there is success, it is a matter of the great conjunction where moderate skill meets luck, contingency, fate, and circumstance.

This appeared in the March 2017 issue.
Excerpted from Fail Better: Why Baseball Matters (Biblioasis, 2017), by Mark Kingwell.

Mark Kingwell is a professor of philosophy at the University of Toronto and a contributing editor of Harper’s Magazine.
Kellen Hatanaka