Shooting Stars: Episode 1 of The Deep Dive | The Walrus
Skip to content 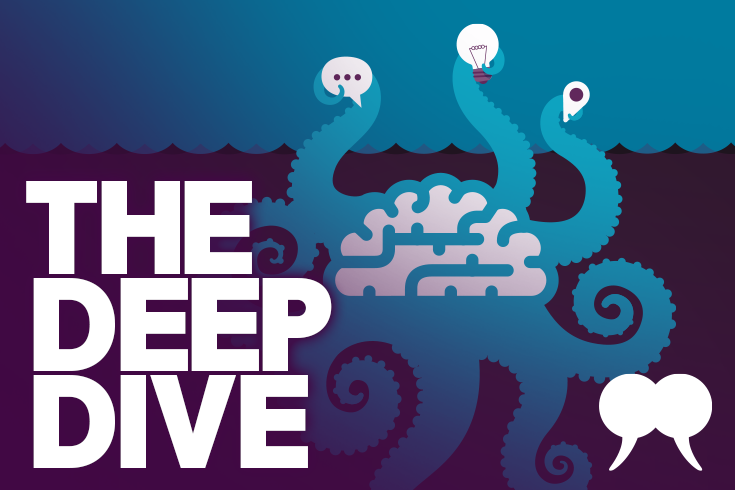 SHEENA ROSSITER: Welcome to Deep Dive from The Walrus, a weekly podcast that takes a deeper look into the happenings at The Walrus. I’m Sheena Rossiter.

ANGELA MISRI: And I’m Angela Misri. This is our very first episode but this podcast is going to feature lots of different contributors to The Walrus: writers, to Talkers, to illustrators, and editors and even some of you listeners and readers. We’ll get the story behind the stories.

SHEENA ROSSITER:
We’re going to be going into to everything, like our upcoming digital series on Wellness. We’ll hear about the long, and occasionally fraught, evolution of the bra, and how the style of bras has started to evolve during the pandemic.
And we’ll get a glimpse into how YouTube instructors are now part of many people’s daily workout routine in a big way.

ANGELA MISRI: We’ll also hear about how the economy is changing in Canada, and we’ll get an analysis of how male grooming trends have evolved during this pandemic. And we’ll introduce you to our Justice Fund writer-in-residence at The Walrus, and hear more about the longform feature she’s working on.

SHEENA ROSSITER: Definitely. Tune in every week to get an earful of some of the great stories we create here at The Walrus. Let’s check out what’s on this week’s episode.

SHEENA ROSSITER: This week we hear from Connor Garel, who was recently The Cannonbury Fellow at The Walrus. Connor is an arts and culture reporter, with bylines in BuzzFeed, Fashion, Canadian Art, and, of course, The Walrus. And Angela, you spoke to him. What is his story about?

ANGELA MISRI: Yes, he contributed the “as told to” photo essay of celebrity photographer Lou D in the January/February issue of The Walrus. Lou D was a photographer to the stars in the 1980s and 90s. And it’s important to remember that before social media, the backstage snapshot was really the only way most fans could meet celebrities like Madonna, Whitney Houston, or Paul McCartney. This is my conversation with Connor Garel about his latest contribution in the January/February issue of The Walrus.

ANGELA MISRI: That’s my conversation with Connor Garel. His as told to photo essay “Shooting Stars” from the January/February double issue of The Walrus was edited by Carine Abouseif.

DANIEL VIOLA:I’m Daniel Viola and here’s what we’re been talking about this week at The Walrus.

Our Slack is full of stories about the sheer number of people testing positive for COVID-19. One that stood out was from Teen Vogue, which looked at their own newsroom and how many staff were coming down with mild symptoms. Since March 2020, The Walrus has published over 180 stories that mention “COVID”(yes, we counted). These articles cover everything from health to business to the arts, and include a poem by Jason Guriel and several episodes of our podcast The Conversation Piece

We’ve also been discussing Anna Maria Tremonti and her upcoming CBC podcast, Welcome to Paradise. The six-episode series will examine an abusive relationship she lived through in her twenties.

And finally, we’re just sent our March/April double issue off to the printers. The magazine will be on newsstands and in mailboxes by Valentine’s Day. It’s packed with great journalism, including one article about the toxic relationship between cities and their water supply, and our cover story looks at why a growing number of healthcare workers in Catholic hospitals are speaking out.

The links for all these articles can be found in the show notes for this episode.

SHEENA ROSSITER: Thanks for joining us on this week’s episode of the Deep Dive. It was produced by Angela Misri, and, me, Sheena Rossiter. I also edited this episode. Thanks so much to Connor Garel for joining us this week. Don’t forget to subscribe to The Deep Dive on Apple Podcasts, Spotify, or wherever you get your podcasts. And if you like what you heard, please leave us a review and rating. It really helps people find the podcast.

Until next week when we take our next deep dive.