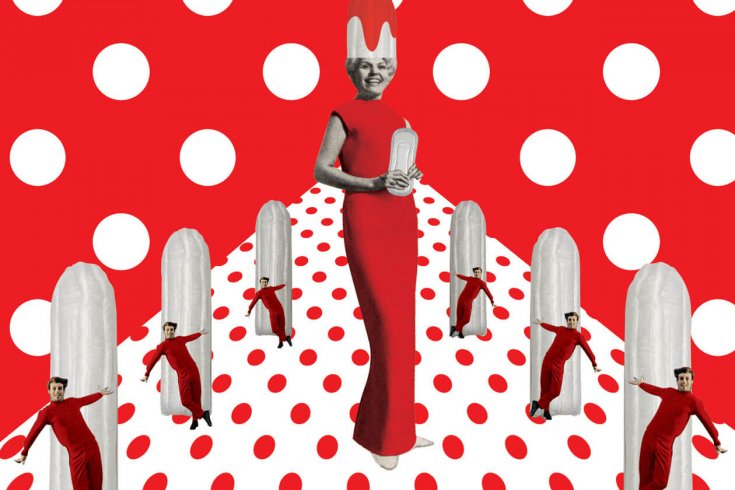 The first Tampax ad ran in The American Weekly, a Sunday newspaper supplement, in 1936. Direct reference to the product on offer was conspicuously absent. “This summer you can experience a comfort and an assurance of daintiness you have never known before,” read the tagline. Even decades after the emergence of tampons as a retail product—and forty years after the first mass-market maxi-pads were manufactured—the words period, menstruation, and menses remained taboo. “I feel sorry for any woman who suffers from menstrual cramps. But I also feel sorry for her husband,” read an ad for Femicin in 1968. Kotex issued the campaigns “Why was I born a woman? Stop feeling sorry for yourself” and “Dear Mother Nature: Drop Dead!” in the 1940s and the 1970s respectively. On a Tampax ad that ran as recently as 1990, the ad copy read, “You can use them at any age and still be a virgin.”

At the recent Women’s March on Washington, maxi-pads were used as a canvas for anti-Trump messaging, their stick-on adhesive backs a useful feature for posting on a wall. Such political demonstrations of feminalia have their history—just look to the role of bra burning in the mythologizing of the 1960s—but the current cultural conversation signals a new visibility for women’s menstrual products, one that is only increasing. In 2015, when Canadian artist Rupi Kaur posted a photo of herself lying in bed and bleeding through her sweatpants, Instagram’s decision to censor the image led to an online furor. Later that year, Kiran Gandhi, a graduate of Harvard Business School and drummer for rapper M.I.A., made headlines when she ran the London Marathon with period blood dripping down her legs, having decided the night before the race that wearing a tampon would be uncomfortable. Last summer, Fu Yuanhui, a Chinese swimmer who was competing at the Rio Olympics, surprised live television viewers by disclosing that she was suffering from cramps. (It is uncommon in China for women to reveal that they are menstruating; according to a 2014 survey, 76 percent of Chinese women don’t even feel comfortable in social settings—such as a dinner with family or friends—while on their periods.)

This past fall, a new organic-tampon subscription service called Easy posted an ad on the back of a bathroom door in Toronto’s Mill Street Brew Pub featuring two women walking naked down sun-dappled sand toward the water to skinny dip, a tampon string hanging down conspicuously between one woman’s thighs. Wait, what? The tagline, part of a new campaign for the Toronto-based company, read, “NO SHAME.”

Easy, founded a year ago, sends its North American subscribers organic supplies every three months—making it the menstrual equivalent of Clearly Contacts. The campaign is geared more toward real talk than fluffy ad-speak. The skinny-dipping spot is one of four shot by Toronto-based photographer Chloë Ellingson: the others depict a couple changing bloodied sheets, a woman lying in a bathtub with a hint of red liquid floating to the surface, and a couple cuddling with a hot-water bottle. “We wanted to create beautiful images that showed situations women realistically deal with,” says Alyssa Bertram, the company’s twenty-six-year-old founder.

Bertram, a former health researcher at Toronto’s Mount Sinai Hospital, founded Easy after learning that tampon manufacturers bleach their products with dioxins, chemicals the World Health Organization has classified as toxic. (Although many women believe tampons might be carcinogenic, the United States Food and Drug Administration states that the level of dioxins found in tampons is too low to be a potential health risk.) The designer who made Easy’s logo passed along Bertram’s business idea to an associate at Cossette, one of the country’s biggest ad agencies, and the next thing Bertram knew, she was in a meeting pitching the art director. “We started to talk about how best to speak to people about what we do. A big part of it centred around eliminating the shame we feel about our periods, the discomfort about the conversation,” Bertram says. “When we really stop to think about it, it’s ridiculous that we feel so uncomfortable about something that’s so natural.”

Part of breaking down the taboo, Bertram says, involves including men in the conversation. Her ads run in both men’s and women’s bathrooms across Toronto. “The idea with No Shame is that it’s something that affects both genders,” she says. “We talk about it in a joking way right now—mood swings, having to go out to buy tampons for your girlfriend. I think it’s important to put something in front of people and get them to think about it.”

As new companies rewrite the promotion of menstrual products, formerly fringe products are gaining mainstream visibility. The DivaCup, a reusable silicone cup designed in 2001, was once the menstrual alternative of choice primarily for tree huggers and hippies, but it is now sold at major retailers such as Shoppers Drug Mart. The Japanese lifestyle retailer Muji recently stocked its stores with a new line of “sanitary pants,” available in two styles and starting at $19. The underwear have a special lining, with two layers that hold a pad between them. “A built-in safety,” reads the product copy. “Both openings contain a special lining for water absorption, for a sense of security during the time of the month.”

Thinx period panties, which were launched in 2014, are a line of sleek cotton-and-lace briefs that can replace traditional menstrual products altogether. Initially, the media company that reviews ads for New York’s Metropolitan Transportation Authority found that Thinx’s copy lines referring to periods were offensive. The MTA later approved the ads, which made news once they appeared, and the company’s 2016 campaign featured a trans man modelling the underwear.

The advent of open menstrual marketing may seem distasteful to some. But imagine men being forced to shave their beards in secret, furtively bringing clippers and trimmers home from the drug store in brown paper bags. We talk about condoms. We complain when we have common colds or the flu. Maybe we’re just ready for this aspect of human experience to enter the mainstream. (Says Bertram, “I never thought so much of my life would be spent talking about tampons.”)

Journalist Karen Houppert wrote The Curse: Confronting the Last Unmentionable Taboo seventeen years ago, but the book’s insights into the conflicting ways people deal with periods still ring true. “Menstruation is taught in schools because it’s ‘natural,’ but treated as though it’s nasty,” she writes. “Menstruation is normal, but the attendant hormonal flux is a disease . . . Menstruation doesn’t really have anything to do with sexuality, yet it shares all its taboos.” It’s time for us to treat discussing our periods less like a medical issue and more like a cultural one.

Katherine Laidlaw (@klaidlaw) regularly writes for Toronto Life and Hazlitt. She is a former senior editor of The Walrus.
Leeay Aikawa