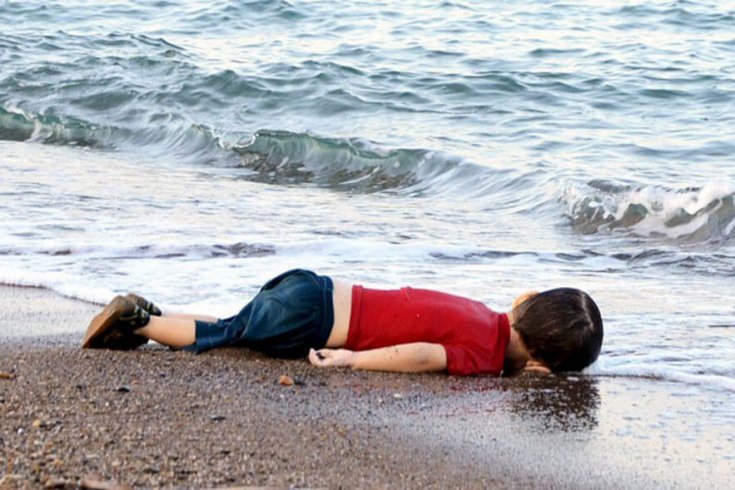 During the first week of September, I stopped looking at Facebook. My news feed was full of one picture: an image of a drowned three-year-old Syrian boy named Alan, face down, head turned away, in the surf of a Turkish beach. I have a daughter who is the same age. And the shape of the boy’s corpse corresponds to her preferred sleeping position. I thought that if I avoided looking at the photo, it would stop haunting me. So far, that hasn’t worked.

The armies that propelled Alan’s family out into open water are fighting a complex civil war half a world away from us. They have confusing Arabic names and fly obscure banners. It’s hard to know who is the greatest villain. And so Canadians instead have found it easier to direct moral outrage at our own government. Chris Alexander is our Minister of Citizenship and Immigration. His department decides whom we save, and whom we don’t. Somehow, this must be his fault.

A young child’s suffering is regarded as a special kind of evil, so powerfully felt that a single image blots out everything else from our moral universe. “I took the case of children only to make my case clearer,” Ivan says to his brother Alyosha in The Brothers Karamazov, after reciting a list of infamous horrors visited upon young Russian boys and girls. “Of the other tears of humanity with which the earth is soaked from its crust to its centre, I will say nothing.”

As Ivan systematically knocks out the underpinnings of his brother’s faith in a benevolent ruler, he asks a question that has become well-known among philosophers:

Imagine that you are creating a fabric of human destiny with the object of making men happy in the end, giving them peace and rest at last, but that it was essential and inevitable to torture to death only one tiny creature—that baby beating its breast with its fist, for instance—and to found that edifice on its unavenged tears, would you consent to be the architect on those conditions?

Alyosha is repelled by this seemingly monstrous hypothetical. But what Ivan described was a reality in feudal societies such as Russia, where a serf child could be murdered in front of his parents for injuring a lord’s favourite hunting dog, and the most grotesque forms of suffering were seen as pathways to God’s grace.

When Fyodor Dostoevsky was writing The Brothers Karamazov in the 1870s, he compiled his macabre case studies by clipping scattered articles from local newspapers. There were no pictures, and details were scant: Sadistic treatment of children was not unusual, and these were not considered journalistically important stories.

In 2015, however, no act of moral imagination is required to internalize the suffering of children everywhere. Just open your news feed and let the photos and video wash over you.

We always have known, somewhere in our pampered Western heads, that while we eat our breakfast and brush our teeth, unspeakable things are happening to innocent people everywhere. But human beings are visual creatures: It is one thing to hear of death, and another to see it. With so much of the world’s savagery now landing on our screens, technology has made us the eternal Alyosha, besieged every day by the eternal Ivan. Our brains, conditioned by evolution to manage life and death within small clans, lack the circuitry to process an endless digital cascade of global grief.

Ivan Karamazov observed the suffering of children and railed against God. We observe the suffering of children and rail against government—the welfare state having replaced the Supreme Being as the mercy-provider of last resort. But this God always will fail us, because in a globalized media age, our point-and-shoot moral demands have become geographically infinite and politically unstable.

Our federal government has settled 2,300 Syrian refugees to date. Thomas Mulcair wants to accept 10,000 more this year. For Justin Trudeau, the number is 25,000. That sounds like a lot. But what happens if refugee number 25,001 is photographed washing in with the tide? Why not 50,000? Or 100,000? And what happens when a dead child is photographed on a beach in Honduras? Or Libya? Will the number be the same? More? Less? Why should there be any limit at all?

These are not just questions for politicians, but for ordinary Canadians as well. During the first weekend in September, I received an email from a friend: “I think we have all been haunted by the image of Alan’s tiny lifeless body. A group of our neighbourhood friends is thinking of sponsoring a Syrian family. The approximate cost to privately sponsor a family of 4 or 5 is about $25,000 . . .” An effective altruist has to keep reminding himself that there are little children dying all over Africa from preventable diseases, sometimes in hideous ways that might make a drowning at sea seem humane by comparison. GiveWell.org estimates the cost of saving one of these lives at about $3,000. The math here is stark. But reasonable debates about foreign aid and immigration policy seem to evaporate in the face of Dostoevsky’s “one tiny creature.” That dissonance was captured perfectly by the mask of helpless frustration on our immigration minister’s face, as he clumsily tried to justify his government’s policies to CBC host Rosemary Barton. Which of course he couldn’t, since no one can win an argument against a dead child.

As I wrote this, I began looking at that picture again. I had to. If any of us purport to have an opinion on what must be done to address the world’s horrors, then we have a responsibility to face up to them in some small way. However, we should expect that our instant emotions be translated into policies that will affect Canada for generations—an expectation that always will turn our politics into a sort of unsustainable humanitarian bidding war.

Every humane society must listen to “that baby beating its breast with its fist.” But we will not be able to do our part in fixing the “fabric of human destiny” if we can hear nothing else.