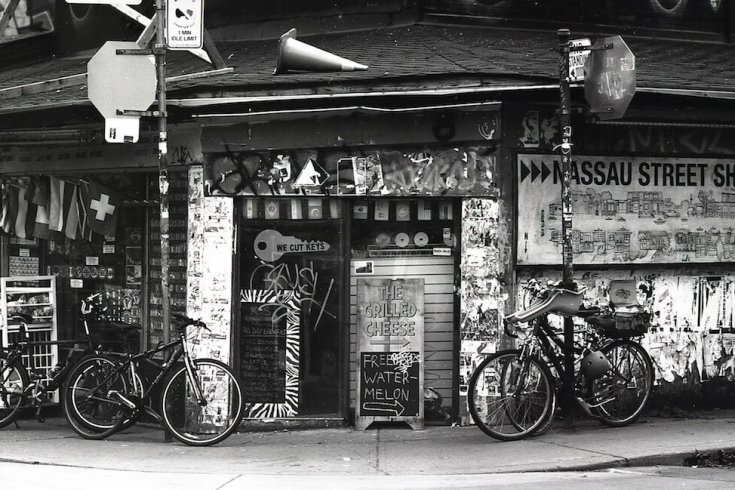 Shortly after sunrise on August 27, a couch burst into flame on the second floor of a red brick row house in Toronto’s Kensington Market. At 6:12 a.m., someone called 911. Four minutes later, the first fire truck arrived. Nine minutes later, I woke to a husky male voice yelling “Get out, get out!” on the street and an equally deep female voice yelling something unintelligible back. Passed out on my friend’s couch inside 45 Kensington Avenue, two houses down, these voices sounded like any late-night lovers’ spat. All four nights I’d slept in the market, visiting one of my closest friends, I’d been woken by high-decibel arguments—or conversations, it was hard to tell. I rolled over and tried to fall back to sleep.

Kensington Market—once a hub of Jewish grocers, now a fading hippie neighbourhood of coffee houses, bars, and vintage shops—is notorious for fires. On Kensington Avenue, a three-block snippet of a street, there have been six blazes (three residential and three garbage) in the last two years alone. That morning, as I tried to block out the screaming on the street, the wail of a siren grew louder and louder until it sounded like it was just outside our front door. When I finally looked out the second-floor window, I realized it was. Not one truck, but many—I counted twelve in total outside 39 Kensington Avenue. Onlookers gathered, faces turned up to where orange flames licked out the windows and up the brick facade. Like most houses in the market, 39 Kensington is old and ramshackle. Strung across its front porch is a red banner that says “Eye of Shiva,” announcing a shop on the main floor selling Indian jewellery and clothing. Before last week, eight tenants lived upstairs. Later, I learned that Toronto Fire Services had inspected the house a month prior and found numerous code violations, including no second-floor fire escape.

My friend and I watched as the frenzy unfolded below. Paramedics in blue helmets wheeled gurneys out onto the street. Firefighters ran past in baggy brown pants, unspooling hoses and carrying ladders toward the blazing homes—by then, two were aflame. From where we stood, the action seemed far away: there was at least a two-house buffer between us and the blaze. A fireman caught sight of us standing in the window. He waved at us from the sidewalk. We waved back. His waves grew more frantic, and we froze. He was telling us to leave—but, why? Sure, it was a little smoky inside, but we assumed it was residual. Moments later, he was inside the house and storming up the stairs, smashing the deadbolt off our front door. It all happened fast. My friend and I snapped into action, racing around the two-bedroom apartment, snatching laptops and cell phones, stuffing cords into bags. As a guest, it was easier for me to dash, but my friend was torn between grabbing five years’ worth of Ph.D research, stored on two laptops and an external hard drive, her cats, who had scattered, or her grandmother’s 200-year-old gold and diamond ring. “Should I get the cats?” I asked the closest fireman. “Get! Out!” the face behind the plastic guard yelled. We ran down the stairs in our pyjamas, bags criss-crossed over our arms and shoulders, blind to everything but the open front door we scrambled towards.

While we had been waving to the fireman on the street, the blaze had torn through the connected attics between 39 Kensington and our house. In the video footage we watched later online, a great rippling sheet of smoke rose from the roof over our heads, kindling in the seconds before it bursts into flame.

Outside, the smell of burning wood and scorched brick hung thick in the air. After a few hours, we’d grown attuned to the chemical stink. A TTC driver walked down Kensington Avenue offering displaced residents like us—lost-looking vagrants with tired eyes holding blankets, backpacks, and boxes—a bus to wait in at the end of the street. A woman asked if we needed a place to sleep that night. A man offered space to store the belongings we carried. Here was the Kensington Market spirit people praise. The media showed up next, with cameras and microphones and keycards ringing their necks. How much do you pay in rent, they asked. How many people live in the building? Were there fire alarms inside? There were, I thought. But they didn’t go off.

A year and a half ago, a residential fire much like this one killed two people and injured ten others on St. Andrew Street, around the corner. The home was an illegal rooming house with numerous fire code violations: no fire extinguishers, no clearly marked exists, and faulty fire detectors. As rent in Toronto continues to rise, unregulated rooming houses—more than four unrelated tenants in a residence—run rampant across the city. They’re particularly popular in Kensington Market, one of the last bastions of affordable rent downtown. The St. Andrew Street rooming house was home to mostly single young men recently arrived from China and Vietnam. It might not seem like a bad idea to take a chance on an inexpensive, shoddy apartment for a few months, but the most valuable thing you could lose is your life.

Less than an hour after we evacuated, the firefighters beat the flames back to embers, then to smoke, until there was only a damp burnt tinge to the air. Three people were injured, although no one needed a trip to the hospital. The cause of the fire is still unknown. One by one, tenants were let back into their homes. We re-entered, ready to collect what we could carry out in our arms. On the top floor, firefighters had sawed through our roof. District Fire Chief Mike Swift walked through the rooms with us. “I’m gonna say this is uninhabitable,” he said, not a hint of irony in his voice as he surveyed the space, now melted and charred. Two days later, I returned to unlock my bike from the front gate. A street festival bustled outside, with salsa music booming and bubbles floating over the heads of revellers. At 39 Kensington Avenue, the Eye of Shiva had racks of clothing for sale out front. The only sign of the fire was a few wooden planks nailed over the burnt windows on the second floor. Life in Kensington Market rumbled on.