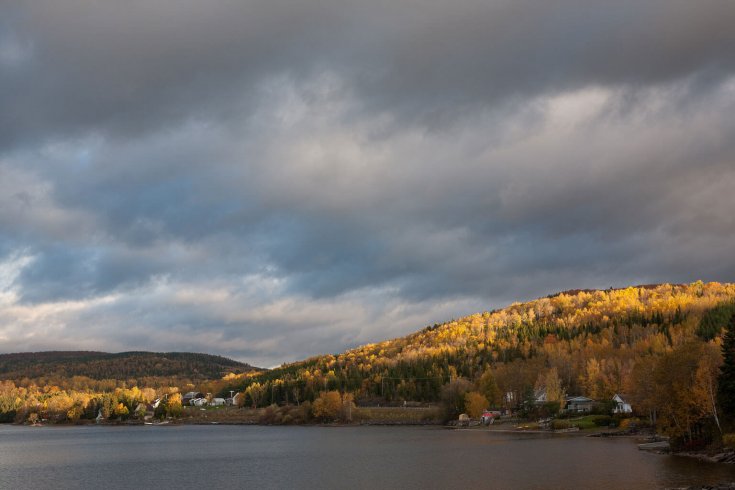 At forty-five kilometres long and five kilometres wide, Lake Témiscouata is known for the quality of its water, which is used as a clear water source for the surrounding villages. “I don't know how much a potable water source for 3,000 people is worth,” wonders Michel Grégoire, director of the local water management organization.

Canada’s relationship with pipelines is a fraught one. Critics of their construction say the environmental risks are too high, that a single oil spill could wipe out marine life or spoil drinking water. But energy companies have long touted their economic benefits: more jobs, more money.

While these disputes have been common in British Columbia, the battle between environmental and economic merit has now extended to the Prairies and beyond, where TransCanada’s Energy East project is up for debate. Proposed in 2013, the pipeline would ship more than one million barrels of oil every day from Alberta through Saskatchewan, Manitoba, Ontario, and Quebec to tanker ports and refineries in New Brunswick. The plan includes a conversion of about 3,000 kilometres of pre-existing natural gas pipeline to oil service, with most new construction in Quebec and New Brunswick. The project is currently delayed, but if built, the pipeline would be the largest in the country.

Though Justin Trudeau was uncertain of his stance on Energy East during his federal election campaign, his administration says it now embraces the project in light of the demise of another high-profile pipeline, Keystone XL, whose defeat was once thought impossible. “We support this,” foreign affairs minister Stephane Dion told the Globe and Mail earlier this month. “But we want that to be done properly and it will be difficult to do if we don’t strengthen the process itself, the process of consultation with communities and the process of scientific environmental assessment.”

In fact, environment minister Catherine McKenna pledged in November scrutinize the climate change impact of proposed pipelines. It’s an attempt to elevate the country’s international standing, long an international embarrassment, prior to this year’s United Nations climate change summit, which begins in Paris this Monday. If the Trudeau government is sincere, this could be a serious impediment for the proposed pipeline, which would have a bigger carbon footprint than even Keystone XL.

For those safeguards to be set in place, the government will have plenty of other factors to consider. A report by the Council of Canadians lists 961 waterways and ninety watersheds along Energy East’s proposed route, including the Ottawa River, the Rideau River, the St. Lawrence River, and the South Saskatchewan River. Many of these rivers and lakes serve as sources of drinking water and are held as sacred by First Nations communities. They’re also located in areas frequented by families. All could be devastated by spills.

Among these waterways is Trout Lake, a drinking water source near North Bay, Ontario. Locals suggested a reroute of the pipeline to avoid contamination. The Ontario Energy Board, which conducted its own review, took a similar position in an August report: “Even though almost half of Energy East runs through Ontario, the OEB believes the pipeline will result in only modest economic benefits for the province.”

Energy companies have already lost one battle to environmentalists in Cacouna, Quebec, where they had hoped to build a tanker terminal on the St. Lawrence River. The proposed site was a breeding ground for endangered beluga whales, and the threat of endangered species worried the public. TransCanada eventually abandoned those plans, pushing Energy East’s overall schedule back while the search for other prospective terminal location continues.

Meanwhile, perhaps the most at-risk ecosystem is one that has received little attention: the Bay of Fundy. According to conservation groups, the bay represents a unique collection of diverse marine habitats that support tourism, fisheries, and aquaculture industries. Home to the highest tides in the world, the bay is especially at risk from the types of spills that occur with oil tankers. The increase in large tankers could also negatively affect whale populations.

As Canadians await a resolution from politicians, the energy industry, and environmentalists, The Walrus invites readers to examine photos by Valerian Mazataud, which illustrate parts of Canada that may soon become home to the Energy East pipeline.

Ben Powless is a Mohawk citizen from Six Nations in Ontario, currently based in Ottawa.