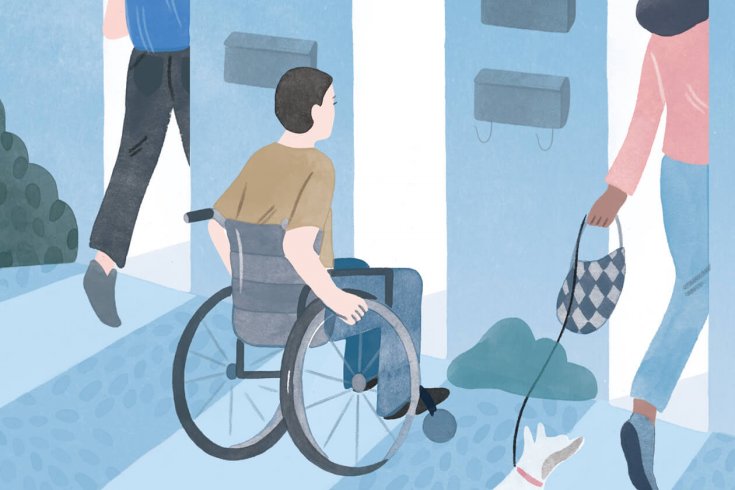 When I moved from northern British Columbia to
Ottawa to attend university in 2007, I fell in love with the city and planned to make it my home. Seemed like a simple enough choice, but when you use a wheelchair, as I do, and need help with things most people take for granted—dressing, getting up and going to bed, cooking and eating meals, using the toilet—such a decision can lead to years of bureaucratic nightmares while you look for a place to live.

Many adults with disabilities such as mine are eligible for “supportive housing,” which means they will have access to full-time personal attendants. Clients pay rent to a landlord but receive support services from companies that have partnered with building management. It can take years for one of these apartments to become available. When I first signed up for the program in 2011, I was warned that the average wait time was eight years. Now it can be between twelve and fifteen years. In the meantime, people rely on overburdened family members who often aren’t trained to provide adequate support. Or they hire outreach agencies whose expensive daily rates compel clients—most of whom live on government subsidies—to forgo certain aspects of their care. I used to joke that, for a disabled person, waiting for an apartment is like waiting for an organ transplant—your life depends on someone else dying before it’s too late.

Because I require daily care, I could not manage even a week or two of homelessness: I would need to be admitted to hospital.

Even when a supportive-housing spot does open up, it can be a challenge to find a space that’s functional and safe. An apartment can be technically accessible—lower countertops for cooking, wheelchair-friendly entrances, no thick carpets—but unsuitable for certain disabilities. Some clients might need a higher toilet seat, for example, while others may find such a thing impossible to use. One university friend I spoke to was never sure her bulky wheelchair would squeeze through the doorways of the apartments she was being shown. She finally moved into a place, but found the bathroom cramped. The program declared her as “fit” for the unit, but didn’t seem to consider whether the unit fit her. The implementation of accessibility standards, while a good thing, can end up sidelining a lot of disability needs.

Supportive-housing providers are not all created equal. After the aforementioned friend took up residence in her supportive-housing space, the assigned agency forced her into a rigidly scheduled life involving wake-up calls and planned meals—short ones, at that. Staff even had misgivings about giving her showers, saying it would be risky to move her from her wheelchair without using specialized equipment—equipment she is unable to afford. She now relies on friends to bathe her.

Because supportive housing is so scarce, if a client is unhappy with the service provider, or if the location no longer works for her, or if her life circumstances change, she is stuck where she is. Clients with a degenerative disability live with the spectre of being told their needs have become too much to handle, which would mean not only losing their care, but also becoming homeless while waiting for a spot in a long-term care facility. There are few other options. Many wheelchair-accessible apartments are available only as part of supportive-housing arrangements. Because these apartments fill up fast, it’s hard to find one if you’re not part of such a program.

This is the situation I found myself in earlier this year. When I finished graduate school, I knew I had to move out, since I could no longer live in the supportive housing provided by the university. But where could I go? I had already been on the subsidized-housing waiting list for years. I was told that if my case suddenly became urgent, I would move up the priority ranking. But because I require daily care, I could not manage even a week or two of homelessness: I would need to be admitted to hospital, thus wasting taxpayer money.

Luckily, I was spared this, but many are not. I know about at least one person who, after completing her education, was placed in a group home intended for people with more severe physical disabilities.

There are many reasons for the lack of housing. For one thing, there’s no infrastructure. In a city such as Ottawa, many apartments are in heritage buildings and thus exempt from the rules set out in the Accessibility for Ontarians with Disabilities Act. Often such units can’t be properly renovated even if the owners want to accommodate disabled tenants, because the physical structure of the building won’t allow for it. In addition, building new housing requires federal, provincial, and municipal co-operation, and cities have to take the lead. The initiative doesn’t seem to be there. Richard Ruest, who managed the common wait-list for supportive housing in Ottawa until the fall of 2015, said he has heard of no plans for new housing for people with disabilities. “The Ontario Ministry of Health wants to provide health care,” he said, but added that the current focus is on seniors.

The Ontario government has made progress funding the self-managed attendant-services program that I currently use—up to 1,000 people across the province have obtained housing this way. In this program, the government pays you to hire attendants. Instead of simply accepting the people sent to you by outreach agencies, you have more freedom to determine whom you employ, how they will help you, and when they will show up—which means you can enjoy such luxuries as a job or a bedtime later than 9 p.m.

While this is good news, it doesn’t change what adults with disabilities face: they either wait years for an attendant-care situation that might not fit their lifestyle or, if they are lucky enough to receive their own funding, have few places they can safely live. Given the right supports, disabled adults can lead productive and happy lives as active members of their communities. But we can’t do that if there’s nowhere in those communities for us to go. We don’t need much—just a room of our own.

Sarah Trick is an assistant editor at TVO. She has written for the CBC.ca, Global News, and more.
Tallulah Fontaine