Marching in the Midst | The Walrus
Skip to content 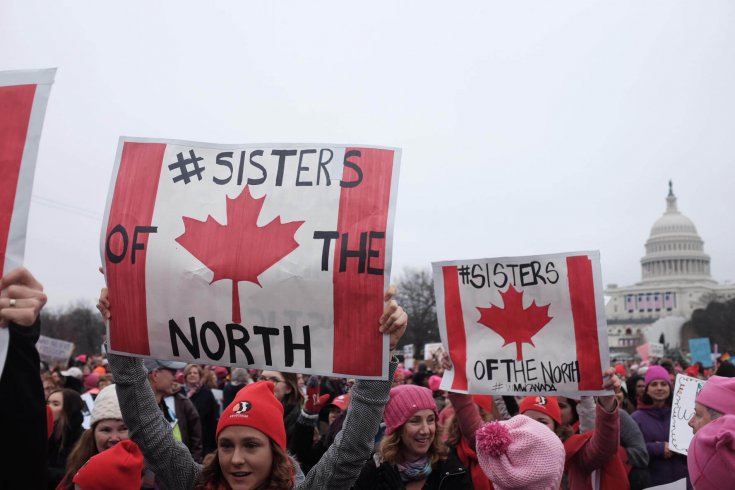 In my life there have been momentous changes this past year. I have been writing a novel partially set in the American Civil War. Because of the violent and, at times, blatantly racist nature of the material I am working in and on, I began reading and listening to conversations to which I have never listened. These conversations are not the hateful statements of Donald Trump’s supporters, but the ones that people of colour are having, especially women of colour. I have been on the verge—listening and learning. I have listened in fear and shame, trying to follow an edict Ta-Nehisi Coates makes in his article “The Case for Reparations”: “What is needed is a healing of the American psyche and the banishment of white guilt.”

I take this to mean that the corrupted thing called white guilt guards against the effort required to repair centuries of wrongs, wrongs that have harmed, and continue to harm, black people. That the density of white shame works as a defense against fixing this egregious past is necessary to own. But how? What does this look like? How not to do more harm? How to be—what?—an ally? A good listener?

Something even more momentous happened this year in the world. The electorate of the United States of America chose neofascism over women. I am not speaking about symbolic choices. I am saying that millions of people voted for a leader whose politics leverage the worst kind of identitarian nationalism—racist, misogynist, able-ist rhetoric—rather than voting for a brilliant, highly politicized woman. Of these millions of people, 53 percent were white women. This surprised and enraged many but as the educator and author Rhon Manigault-Bryant has written in “An Open Letter to White Liberal Feminists” our shock is “curious for its naïveté and annoying for its obtuseness.” Rightly so, her letter articulates that the exit polls should awaken us to the reality that white women are caught in a paradigmatic structure that, relatively speaking, supports them. These women voted for what they understood as their best interest, even if that structure may also oppress and burden them. In short, the vote demonstrates that white woman voted for what power the structure afforded them, rather that voting for an inclusive, new structural possibility in the leadership of a woman.

The American Germanic scholar Eric Santner writes that “[t]here is . . . often a thin line between the passions infusing our engagement with the world and what is “undeadening” in it.” It is the paradigmatic structure of our world that brings this sense of undeadening, the sense that while we are not actually dead, we are tantamount to dead (because we are zombies in the face of the way society burdens us with expectations that force us into a state of non-participation). In other words, we might say that 53 percent of white, educated, affluent women voted to stay on the verge. In fact, they seem to have voted to turn back the clock on various freedoms in order to re-instate an imagined, utopic past.

In a recent CBC interview with Michael Enright, the social activist Letty Cottin Pogrebin—one of the founding editors of Ms.—articulated the way that psychology may have played into how women voted insofar as “[Hillary Clinton] reminds them of who they aren’t . . . and for white women there is no excuse of race and poverty to say ‘Oh, I didn’t make it because there were systemic barriers.’” But whatever backlash Clinton incurred because of her perceived elitism, or because of the possible anxieties women had about their own self worth, defends against a much worse ugliness—that is, the hideous wounds of hierarchical and historical structures around race, gender, and disability. The vote annulled a participation in that wound. But it also amplifies the call to address it.

That is why when I saw the Women’s March notice on Facebook, I wanted to be in the stream of women addressing this systemic problem. There is, of course, a quality of being in the midst of life that comes from writing novels and stories that engage and theorize one’s political epoch, and that seek to ignite readers in some way—to awaken them. I do not dismiss risks I may have taken from the safety of my computer console. I know the cost of these risks. I know that introspection is the work we each must do if we are to heal not just ourselves but, through that singular work, evolve the larger organism that is the human race. But it is not enough to write from the verge, I have learned.

And so, like hundreds of thousands of other women, I am marching in Washington today. I am scared. Scared of walking in the middle of the road even if march protocol suggests that for my personal safety I “stay at the edges.” May there be no edge for me here in Washington.

Sarah Palmer (sarahpalmerphoto.com) has contributed to Toronto Life, Maclean's, and the Globe and Mail.