It Was a Crass Speech. But What Did Anyone Expect? | The Walrus
Skip to content 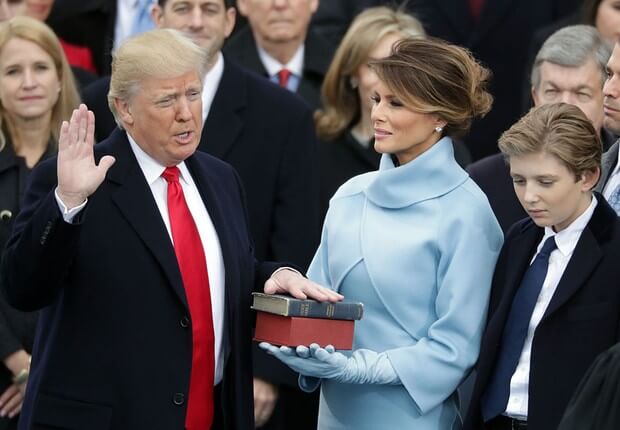 Donald Trump’s inauguration speech on Friday was unprecedented in presidential history. Containing fewer words than a Conrad Black newspaper column and lasting a scant sixteen minutes, it was a cross between a common stump speech and something the father of the bride would rattle off at the rehearsal dinner. Dystopian in theme, its short sentences incorporated such ugly words as “bleed,” “carnage,” “depletion,” “disrepair,” “trapped,” and “flush.”

Where Ronald Reagan invoked the Gospel of Mathew’s “shining city on the hill” Trump conjured an America worthy of Cormac McCarthy’s post-apocalyptic The Road. Where Abraham Lincoln appealed to the nation’s better angels and spoke of America as “the last best hope on earth,” Trump thundered: “From this day forward, it’s going to be America first,” which may have been inspired by the scene in Mommie Dearest where Joan Crawford yells “don’t fuck with me fellas” at the directors of the Pepsi company.

Having reviewed the full text, I am convinced there were only two allusions to any other voice: Bane, a super villain from the Batman universe, and pop singer Rick Astley (“I’m never going to let you down”), meaning that in effect the new president Rick-rolled the world.

I was part of a live broadcast on NewsTalk 1010 radio in Toronto during Friday’s ceremonies. When I offered that I might have preferred a speech that referenced the Founding Fathers or Robert Frost, you would have thought I had just told a room full of Stevedores that I liked My Little Pony. I was assailed on all sides by Trump fans who asserted that we snobs just don’t get it. “Trump speaks directly to America,” they insisted,” and America doesn’t care about Robert Frost.”

But even if Trump has some sort of direct and visceral connection with a portion of the populace, can one not lead and inspire at the same time? If your words are going to one day be inscribed in stone, surely they must be more transcendent than “America will start winning again, winning like never before.”

I do appreciate that for the time being, oratory is seen as something of a political liability. That’s largely because Barack Obama was good at it. Early on in Obama’s tenure, conservatives who once celebrated the crisp, clever and subtly allusive speech-making of Ronald Reagan began to deride Obama as a “speachifier” and “professor in chief.” In fact, Obama may stand as one of the great all-time orators. Drawing on the African American tradition, his best speeches were like jazz improvisations, as he alluded to scripture, the great poets, his predecessors and the black literary and political canon—even if Republicans derided it as “just more talk from the do-nothing in chief.”

Fancy words are one of the signifiers of the elites Donald Trump ran against. “People don’t want Robert Frost,” one of my interlocutors said on Friday, “they want jobs.” (I do apologize for using the word interlocutors). Which is completely true. But why must their yearning for a better future be coupled with a Madam Defarge worthy bloodlust to see anyone who knows who Madam Defarge is laid low?

The tenor of texts, tweets and e-mails I have received since the election boils down to “Trump won, you lost, shut up.” During my Friday broadcast, the man who was once chief of staff to Toronto mayor Rob Ford offered that half the fun of Trump’s inaugural speech was that it annoyed people like me. In what rational political universe is it a measure of success that you cause discomfort to a cohort that is arguably bigger than your base?

I get that I am my own enemy. That I decry a lack of worldliness and guile in Donald Trump becomes yet another iteration of that already tedious trope: “this is why Trump won.”

So I’ll wait it out. Because Robert Frost is eternal.

When a friend calls to me from the road
And slows his horse to a meaning walk,
I don’t stand still and look around
On all the hills I haven’t hoed,
And shout from where I am, What is it?
No, not as there is a time to talk.
I thrust my hoe in the mellow ground,
Blade-end up and five feet tall,
And plod: I go up to the stone wall
For a friendly visit.