Loving Sports at Any Age | The Walrus
Skip to content 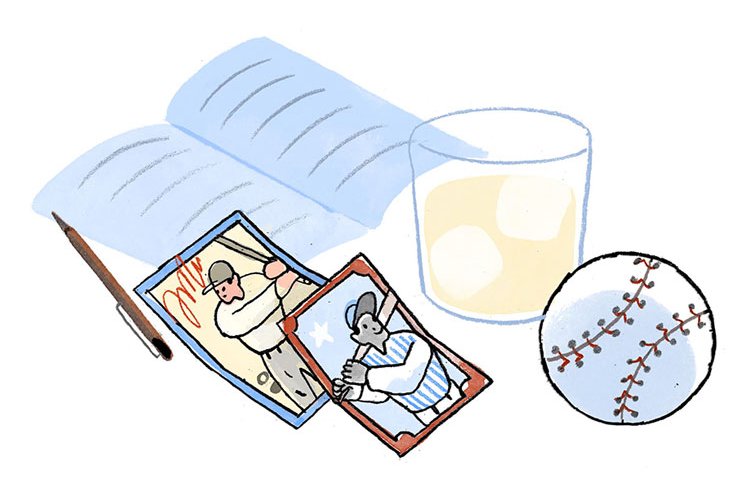 It’s early afternoon and humid as my father and I enter the Rogers Centre, well in advance of the first pitch. “I like to see them warm up,” he told me, no leeway offered. I’m anxious to find our seats. The stadium can be a vast, forbidding obstacle course, and my father’s gait, at eighty-eight, is halting, his breath laboured. I imagine him slipping on slopped beer, being jostled, even trampled by the crowd. For me, this is nerve-racking. Not for him. He’s driven, as always, and won’t be denied.

My father’s relationship with sports was immersive. As with politics, it was a lifelong commitment. “Dick” to friends, he was a serious man who served two prime ministers, represented his country in Washington for a decade, and spent the rest of his career advising bank presidents. But baseball, football, and hockey were his abiding loves. He was also not fanatical. “Who are you for?” I’d ask, finding him in the study, consumed with the screen. I don’t think he cared. More than anything, he was a student of the game.

Our seats are above the visiting Boston Red Sox’s dugout, in a section reserved for “guests of the organization.” The diamond radiates, it glows: high-definition baseball. As each runner hits home plate, my father cheers and strains to rise. It’s not enough for him to be at the game; he needs to engage. Young men seated beside him break focus, take note, and reflexively, courteously offer him an arm up. Our exit strategy preoccupies me. I’m on my phone looking at Uber pickup locations. He flags down the beer guy.

Following the Red Sox was a given for him, in no small part due to The Great Fenway Park Writers Series. A curiosity in today’s hero-worshipping sports culture—a literary salon sponsored by a professional sports team, the only one of its kind—it was founded by Dad’s great friend of five decades, George Mitrovich. They grew close in the 1970s, working on Capitol Hill, and discovered their interests aligned: politics, public service, sports, and writing. George Plimpton was invited to speak. So was humorist Roy Blount Jr., sports columnist Bob Ryan, and historian Richard Reeves. Senator Elizabeth Warren appeared, as did Gloria Steinem. Baseball: the thinking person’s game.

Dad played sports, too, but he thought about them more. At sixteen, he pitched an idea for a column to the Woodstock Sentinel Press, his hometown paper. The editors agreed to take him on. “Sports Scope” became his self-styled apprenticeship and his first media platform. With no apparent shortage of adjectives and opinions, Dad succeeded in putting the world on notice (or the Saint John River Valley, at least) of where he was headed. So his dedication to sports and writing developed in parallel, tent poles of his life.

November 2015: we’re in New York for Thanksgiving en famille. Dad’s eldest granddaughter, Madeleine, is both his kindred spirit and a New York Rangers fan. She arranges tickets for us to see her team take on the Montreal Canadiens at Madison Square Garden. A cross-border family, we sing both anthems with fervour but remain divided on favourites to win. Throughout the game, Maddy dances attendance on her grandfather—“Another beer? A hot dog?”—thrilled that he’s still up for such outings at his age. Afterward, all of us exhausted, we trek out to Thirty-Fourth Street and taxi to the Colony Club on Park Avenue, my parents’ Manhattan home base. Maddy helps Dad out of the car—no small initiative—and up the stone stairs. We wait at the curb until he disappears through the club’s august black double doors.

At lunch the next day, Dad mentions the bar at the Regency Hotel, the nightcap he had there, and his good fortune to have caught the last set of some “excellent jazz.” Maddy and I look at each other, confused. “When—last night? After we dropped you?” He nods, understated as ever. “You know, it’s just down Park,” he adds, as if its location made his post–hockey game nightcap any less surprising. In our minds, identical thoughts: his shortness of breath traversing the Garden the night before; his stiff, rickety legs ascending the club steps; our relief at seeing the doorman usher him inside for the night and to bed with his wife, safe and sound. “Very good piano player at the Regency,” he says again. Student of the game, yes. But also a master of how to live a life.

Anne O'Hagan is a writer and book consultant.
Tallulah Fontaine