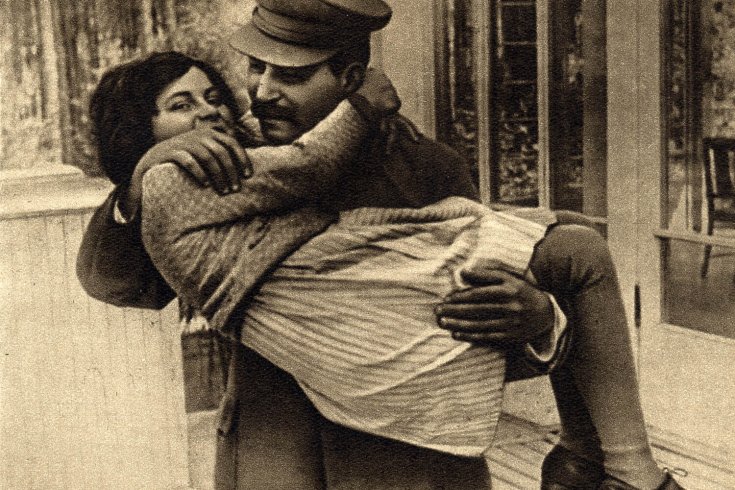 Joseph Stalin with his daughter, Svetlana Alliluyeva, photographed in 1935.

Rosemary Sullivan has written fourteen books in a variety of genres. She is best known for her biographies of Elizabeth Smart, Gwendolyn MacEwen, and Margaret Atwood. She is also the author of the bestselling Labyrinth of Desire: Women, Passion, and Romantic Obsession. While reading the obituaries of Svetlana Alliluyeva in November 2011, Sullivan became obsessed with the story of Joseph Stalin’s daughter. Knowing that Alliluyeva’s life would have intersected with the most devastating events of the twentieth century—from Stalin’s Terror to World War II to the Cold War—and would send the author to investigate FBI and CIA files, as well as the Russian national archives, she determined to write Alliluyeva’s biography.

I visited the Soviet Union for the first time in 1979, when the state was under the repressive regime of Leonid Brezhnev. The writer Joseph Skvorecky, who’d escaped from Czechoslovakia during the Prague Spring of 1967 and settled in Toronto, was a close friend, and he had aroused my curiosity in all things Soviet. I devoured the dissident writers—Solzhenitsyn, Mandelstam, Akhmatova, Kundera, Havel. While in London, I spotted a billboard advertising Aeroflot trips to the USSR and, on a whim, I went alone.

Behind the Iron Curtain it was dark and oppressive. I soon discovered it was dangerous to meet Russians—dangerous for them. Everyone was under close watch. My suitcase was searched before I’d opened it. The lady who kept the room keys at the Hotel Rossiya (there was a key lady on every floor) offered to buy my sweater set before I’d unpacked it. “Secret, secret,” she said. Through a friend at the BBC, I’d arranged to meet Kevin Ruane, the broadcaster’s Moscow correspondent. After a disconcerting taxi ride through the industrial-size blocks of high-rises that lined the city’s suburbs, we visited an apartment where every inch of wall was covered with Russian icons. Folk music played in the background. I was introduced to several dissidents, each of whom had survived the Gulag. But even then I was uncomfortable. Why were we allowed to enter their private apartment? Was there a bargain? Were they safe dissidents?

One afternoon, our Russian tour guide, Dunya, took seven of us to the best tavern in Moscow. I still remember stepping into that cellar bar—the smoke, the vodka, the caviar. It was like a something out of a John le Carré novel. Dunya was fired the next day for having strayed from the official route. When I asked another, British, tour guide why, she replied cryptically that someone wanted her job. Betrayal was the best way to get ahead.

Who could live this way? What would it have been like for Svetlana Alliluyeva, the princess in the Kremlin? No one could encounter her without knowing she was the daughter of the Vozhd, which meant danger, risk. She could never be free of people’s projections.

I interviewed forty people in the course of researching Alliluyeva’s life. The geography I covered was as vast as the history. I went to Russia, Georgia, the United Kingdom, and the United States, scouring archives and hunting down interview subjects. I phoned sources in Alaska and Mexico to fill in the gaps.

The most memorable part of my journey was my trip to Moscow. I visited Alliluyeva’s old school and workplace; I visited the cemetery where her mother was buried. I felt as if I were examining a life that spanned the whole history of the twentieth century. It was all there: Stalin’s Terror, the Gulag, World War II (during which at least 20 million Russians died), Stalin’s anti-Semitic plots, the Cold War and its ruthless intrigues. Alliluyeva played the lead role in my book, but always against that murderous backdrop.

From that sojourn in Moscow I remember Stalin’s family most vividly. Alliluyeva’s cousin Leonid lived with his wife, Galina, in one of the gigantic apartment complexes known as Stalin’s skyscrapers, built in the late 1940s as models of socialist classicism. (Stalin believed that if foreigners were to visit the city and see no skyscrapers, it would be a moral blow.) The elevator didn’t function, the hallways were cluttered, the apartment was dilapidated—but it still carried the air of its former grandeur. Stalin had sent Leonid’s mother, Anna, to solitary confinement in the Lubyanka prison in 1947, which Leonid could not forgive. We talked for hours about the childhood he shared with Alliluyeva, and about his beloved cousin’s defection. When I returned the next day to continue our conversation, Leonid and Galina had set aside small presents for me—a red heart from one of Alliluyeva’s necklaces, as well as her ceramic tea jar. I came away with a sense that, for them, the past was still impenetrable, a complex tragedy they had survived.

We visited Alliluyeva’s cousin Alexander and his wife in their dacha just outside the capital. It was modest, rustic, chaotic; much of it had been built by hand. It was exactly like the dachas I’d read about in Russian literature, and nothing like the walled palaces of the oligarchs. Alexander was harder on Alliluyeva. He’d loved her son Joseph and could not forgive her for abandoning the boy. He was ambivalent about his great uncle: Stalin was brilliant; he turned the Soviet Union into a superpower and won World War II. But he imprisoned Alexander’s mother, Eugenia. Nothing happened that Stalin did not know about through his network of spies. There were those who could not be talked about, those who could not be saved.

I interviewed Sasha Burdonsky, the son of Alliluyeva’s brother Vasili, at the Red Army Theatre, where he was mounting a production of Anton Chekhov. I had been warned that he was not well, but he remained animated throughout our two-hour interview, chain-smoking between answers. He had reason to hate his grandfather and his own father, who had taken him from his mother and placed him in the hands of a deeply abusive stepmother. Burdonsky told me:

I admired Svetlana as a woman and as a human being. I cannot say that of all my relatives. I loved her very much. Of course she was difficult. She was a personality, with charisma. . . . Her fate is so interesting . . . Her whole path, her whole search was for some spiritual shelter, which she could never find . . . I understood that she would never find it, even though she thought she would. She is one of the most tragic figures I know—tragic figures. And fate treated her very cruelly. And unjustly. . . . I hold her in my heart. I am always on her side.

The fourth night in our rented apartment—having been warned not to go to Moscow alone, I had my husband with me, as well as my two researchers—we got a phone call at midnight. The landlord told us that the police wanted to enter our apartment, in order to bring in a murder suspect and videotape her re-enactment of a killing committed there three months before. Spooked by sitting in the kitchen, we waited outside in the cold; the cops said that if we weren’t around to let them in, they’d have to kick down the door. When we asked the landlord for details about the murder, he said he didn’t want to talk about it.

At 2:30 a.m., an unmarked car pulled into the parking lot. Six men and two women emerged. The lead detective approached me and extended his hand. I shook it tentatively. He introduced himself and apologized for the lateness of the hour. The cops behind him were laughing. “In the old days we didn’t need to apologize,” one of them said. Another replied, “Yes, in the old days, it was arrest without right of correspondence”—a Soviet euphemism for execution. “Cop humour,” my researcher said. The officers made their video.

When I told Leonid and Galina about the murder, they were solicitous. “When we heard you’d rented an apartment,” they said, “we were worried—but we didn’t want to say anything.” No one seemed surprised by the murder. It was just a Moscow thing.

On the way home, via Georgia, where I visited the mausoleum covering the wretched shack in which Stalin was born and the city to which Alliluyeva had fled after realizing her 1984 re-defection to Russia had been a mistake, I stopped in London.

I took the train to Cockermouth, in the Lake District, to visit a woman named Mary Burkett who lived at the stately manor of Isel Hall, built in the twelfth century during the reign of Henry II. It was dank and cold, and Burkett lived mostly in one room, but upstairs she had a collection of felt hangings and rugs she had gathered from all over the world. I was introduced to the ancestral portraits on the walls and then set in a room where Burkett had laid out approximately 500 letters in several piles. These I read into my tape recorder for later transcription. A letter from Alliluyeva dated 1996 read, “Machiavellian politicking everywhere. . . . The West must remember that Russia was an old culture with great dignity. Pride is an important but dangerous engine. Being Russian means never saying sorry. Even today Russians are incapable of grief and atonement for Stalin’s crimes. . . . That failure to face the bad bodes ill for the future.”

Alliluyeva believed lust for power had turned her father from a human into a husk. As she wrote, “With cold calculation Stalin cemented his power, afraid of losing it more than anything else.” Yet, he was also the father who had once loved her, calling her his little butterfly. When he flew into rages, only the young Svetlana could calm him—by wrapping her small hands around his gigantic boots. The cost of rejecting him was high. She had to excise her own innocent childhood. Among her last words about her father were, “I will never forgive him. He broke my life.”

What a fate. Alliluyeva lived her adult years as a kind of shuttlecock, batted between two sides in the high-stakes game that was the Cold War. She was a woman in whose life the private domestic world and the world of global politics collided spectacularly. The KGB and CIA were never far from her story. Yet she kept her footing and survived, with a kind of optimistic belief in the Good—the will to affirm good in the face of evil. She believed it to the end of her life.