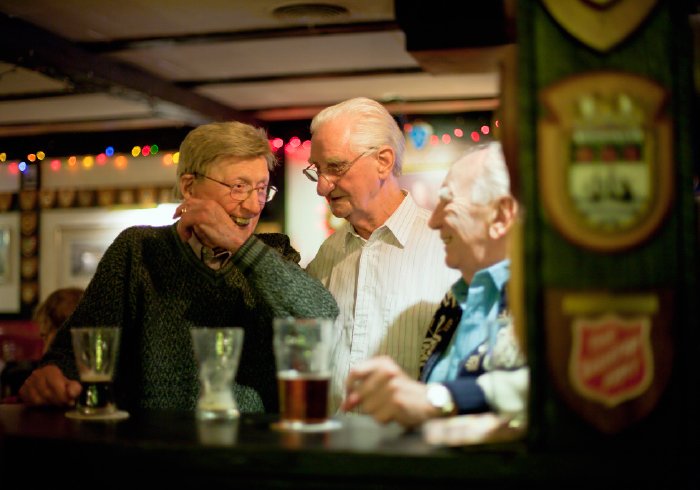 The bar at the Billy Bishop Legion, in the Vancouver neighbourhood of Kitsilano.

With its oxblood red benches, blazing gas fireplace, and hundreds of glossy military plaques, the subterranean bar at Branch 176 of the Royal Canadian Legion offers a cozy refuge from the pacific gloom outside. It’s unusually busy for a Sunday afternoon, probably something to do with an orderly row of shrink-wrapped meat—mostly steaks and pork chops—laid out on a folding table beside a raffle drum full of little blue tickets, bought three for a loonie. It’s meat draw day at the Billy Bishop.

But the hot topic today isn’t the rib-eye; it’s the large flat screen television blocking a comely portrait of the young Queen Elizabeth. Brought in for the Olympic Games, the TV is boosting bar sales, and with the legion on its last legs the membership has voted to keep it. “It’s what the television generation wants, so here we are,” says vice-president Heather Garrison, shaking her head as a brightly clad hockey player crushes his adversary into the boards in high definition. “Every bit counts, I guess.”

Bert Merrett is among a handful of men in the room who have seen real action. The ninety-year-old veteran, a marine commando in the Second World War, tries to find his legion membership card in his wallet, to no avail, so just take his word for it: he’s been a member of “the Billy” for almost fifty years. His hearing is going, but his memories remain intact. While fighting in Italy, he and a buddy would shelter overnight in two slit trenches, holes in the ground they dug themselves. In the morning, he would call out to make sure his friend was okay, which he was—until the night he was blown to “strawberry jam.”

Established in 1926 as a support system for the massive influx of physically and psychologically damaged First World War veterans and their families, the Royal Canadian Legion is dedicated to preserving memories and promoting remembrance of Canada’s servicemen. Leading into the Second World War, there was a legion hall on the main street of nearly every Canadian city or town. By the time Merrett joined, they were booming hubs of formal military-style dinners and country club–style social nights, an era he and his wife, today gathered with friends around a small table, recall with more than a hint of nostalgia.

Since 2001, the population of veterans who survived combat during the first half of the 20th century plummeted by more than half, from about 360,000 to 176,000. As of 2007, the average age of those who fought in World War Two was eighty-three. With Canada’s current military engagement in Afghanistan, the number of veterans is rising, but they’re a different breed. “When I was a young officer, being taught by these senior guys, there was heavy, heavy drinking,” says outgoing Veterans’ Affairs ombudsman and retired colonel Pat Stogran. “These young people don’t drink like that. You know the first thing the troops wanted when we went into Afghanistan? Their weights.”

Sidney Hayes, who’s polishing off a pint with Garrison, served in the Air Force as ground crew in the 1970s, but his two brothers fought in Afghanistan and the Gulf War, respectively. He points out that while young veterans may not be interested in the legion now, that could change as the long-term effects of war take hold. “They’re the ones who are going to have flashbacks in ten years, and then we’ll see.” The trick will be to keep the legion going that long.

The most controversial move to that end was opening up the legion to civilians, a process completed in 2006. Most chapters have introduced televisions, karaoke nights, and the like to attract this clientele—at the risk of alienating old-timers. One recent evening, when a volunteer rock band rolled out the Neil Young (“with dream comfort memory to spare”), one elderly woman resorted to stuffing her ears with toilet paper, letting the white, cottony tails graze her shoulders. And Stogran suggests younger veterans aren’t any happier about the legion becoming a hipster hangout. “They think it’s diluted the membership.”

Worse, the gambit may not be working. Like other branches across the country, the Billy is past broke. It owes tens of thousands of dollars in unpaid property tax, according to treasurer Ted Ross, despite an emergency fundraiser in September and a $13,000 bar haul on Remembrance Day. That’s the one day a year the legion is guaranteed to be packed with veterans and civilians of all ages, as well as a politician or two posing for a photo op.

Ross, the son of a military man, believes veterans deserve more than that. “This is about the guys who gave their lives,” he says, bumping his fist on the table. “If legions die, then remembrance will die.”

In 1933, the Co-operative Women’s Guild in England began distributing a white poppy lapel pin, a symbol of the desire to end to all wars; since then, the icon has been sold by peace groups worldwide. In 2006, however, the Royal Canadian Legion threatened legal action against an Edmonton store for carrying the product, describing the white flower campaign as “not only disturbing but illegal,” and claiming the poppy was a registered symbol, not to be used without their permission. Their objection was as much philosophical as it was legal: they feel the white poppy politicizes Remembrance Day, and disrespects veterans and soldiers who died in the war. White poppy supporters counter that ensuring future peace is a necessary part of honouring the dead—and point out that proceeds (50,000 units the year the legion launched its complaint) go to help those affected by war. Moderates in both camps have suggested wearing the symbols together.