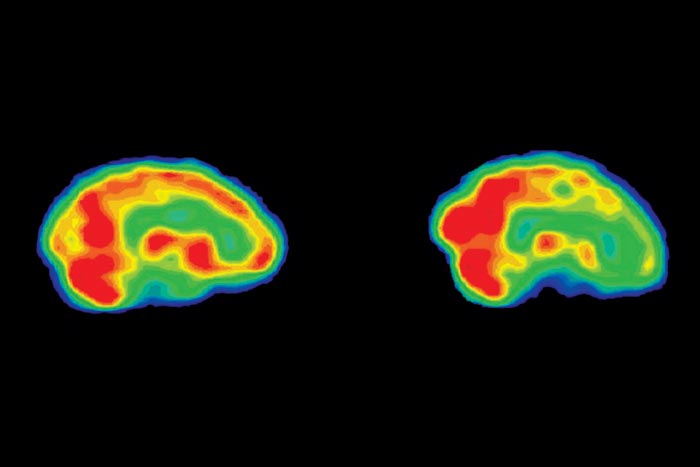 Chris Bauer* was an unusually restless, if bright, grade two student at a public school in Toronto’s west end when a perceptive teacher recommended he be assessed for attention deficit hyperactivity disorder. Duly concerned, his parents, Tom and Jennifer, got him into an ADHD research program at the Hospital for Sick Children, where he underwent a series of tests that confirmed their suspicions. Over the next seven years, Bauer learned how to reduce distractions and focus until a task was done; it seemed he’d gotten the better of his condition. “But then stuff started to slow down,” the now twenty-year-old says. His symptoms pointed to depression, a diagnosis adjusted when he began experiencing episodes of mania. “Those were my creative-destructive times; I wanted to either make something or break something,” recalls Bauer, who was finally diagnosed with bipolar disorder in 2008. The family was stunned. One debilitating brain disorder was bad enough; two defied reason. What on earth was going on?

The answer would spring from a study the family had agreed to take part in when Bauer was diagnosed with ADHD. Scientists searching for genes that cause the learning disorder had taken a sample of the boy’s DNA, which last March came to the attention of the director of the Centre for Applied Genomics at Sick Kids, who was conducting his own study. Scanning the young man’s entire genome, Steve Scherer detected an aberration in two genes that affect brain functioning. The genes themselves seemed normal, but instead of having the standard two copies of each gene (one from each parent), Bauer carried three—a glitch Scherer referred to as a copy number variation, or CNV.

A Piece of Your Mind

A lobotomist who loved his work

Beginning in the late ’40s, Dr. Walter Jackson Freeman II, a champion of the transorbital lobotomy, travelled across the United States in a van he cannily dubbed his “lobotomobile.” Ever the showman, he often worked before an audience, inserting two ice pick–like instruments through his patients’ eye sockets to sever the thalamus from the frontal lobe (or close enough) in the time it takes to hard-boil an egg. He performed thousands of procedures, on patients ranging from schizophrenics to delinquent housewives, but his career ended in 1967 when a patient died on his operating table. Even though he spent his final years in disgrace, Freeman was one of the few doctors of his age to believe that mental illness had a neurological component.

Scherer and several other scientists had stumbled on this genetic phenomenon just seven years earlier, while working on the international Human Genome Project. Tasked with decoding chromosome 7 (one of twenty-three pairs of coiled DNA in each cell, since dubbed “Canada’s chromosome”), he had the opportunity to examine hundreds of samples. He found many mutations, or variations in the gene’s DNA sequence, associated with leukemia, epilepsy, and other developmental diseases. But he also noticed variations in the number of copies of certain genes—something akin to finding the fifth dimension. “Our results were very controversial,” Scherer explains, and many of his peers wrote them off as data errors. “Of course, an alternative explanation was that these genetic differences were real.”

Keeping an open mind, he joined forces with a Harvard cytogeneticist to scan the genomes (all twenty-three pairs of chromosomes) of fifty-five healthy people and found the average person had about a dozen CNVs. The implications were astounding. Until then, the scientific dogma held that humans were 99.9 percent genetically identical, with mutations accounting for the slim margin of diversity. Factor in CNVs, and it seems we’re far more different from one another than anyone had thought. Furthermore, while some CNVs are, like mutations, inherited from one’s parents, it has become clear that others arise spontaneously during the formation of the parents’ sex cells or the embryo. (When Tom tested negative for his son’s genetic anomaly, there was an awkward moment when he wondered, “Is he even my kid? ”) This particular quality of CNVs has driven the incredible pace of human evolution, especially in the brain, where fully half of our genes are expressed.

But with greater odds of adaptation come greater odds of dysfunction, and thus CNVs can also produce harmful effects in the brain. Since 2003, researchers have discovered hundreds of different and rare CNVs that can each disrupt the functioning of genes in a variety of ways, leading to brain disorders from autism to schizophrenia. In other words, one CNV can cause numerous disorders, and one disorder can be caused by numerous CNVs. Here again, scientists had it all wrong: they had assumed that a given disorder was the result of common mutations in a handful of genes. “The whole medical genetics community, including the neuropsychiatric community, was brainwashed,” says Scherer. While CNVs have complicated the genetic picture, they also neatly explain certain puzzling clinical realities, such as patients whose symptoms don’t fit the diagnosis, and patients who, like Chris Bauer, present with more than one disorder. In Bauer’s case, it’s not yet clear whether both his conditions were caused by the same two CNVs; studies have confirmed a link with bipolar disorder, and Scherer is now looking for similarities in other ADHD patients.

In the meantime, the Bauers have benefited enormously from Scherer’s findings. Genetic certainty has helped them accept the bipolar diagnosis, and in turn the diagnosis has resulted in greater acceptance of the symptoms. “Once you know there is a medical basis, you can focus more on dealing with the condition directly,” says Tom. “It also validated our son’s feeling that there really is something biological going on.” Genetic testing on a wide scale may one day facilitate earlier diagnoses, so therapies can start sooner and prognoses look brighter. As far as the Bauers are concerned, testing has been equally valuable in ruling out any bipolar-related genetic abnormality in their younger son.

Scherer is gratified his research has been useful to individual families, but he’s motivated by the prospect of advancing science—a true test of the mind’s adaptability. “It’s like CSI,” he says. “You’re looking for the clue that will crack open the case.” Since its dubious beginnings, CNV research has become hot enough for Scherer to generate the necessary support for an international study of CNVs in some 8,500 patients with schizophrenia, bipolar disorder, ADHD, autism, and obsessive-compulsive disorder. Research on that scale will connect the dots for a fuller understanding of mental pathologies. Beyond that, Scherer hopes it will help him replace an old model of genetic uniformity with a new one of genetic diversity, revealing a broader truth about what it means to be human.

Mark Witten is a health journalist. His work has appeared in Saturday Night, Toronto Life, and other magazines.