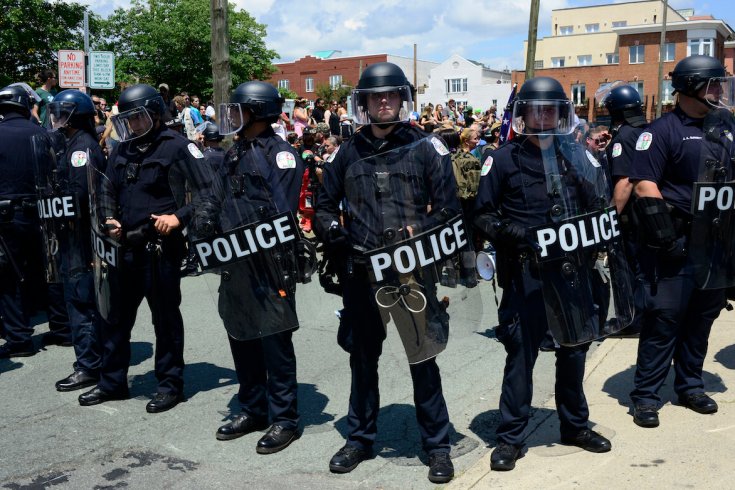 Two weeks before tiki torch-wielding Nazis in Charlottesville marched from the dark past into our dimming present chanting “Jews will not replace us” and that old Hitler-era chestnut “Blood and Soil,” my distraught just-learned-to-read son was crying “I can’t get the words out of my head.” He’d just seen mall bathroom graffiti that said “Fuck the Jews” alongside a swastika. He knows the F word. He knows he’s Jewish. And while he’s still only familiar with Nazis as the bad guys from Indiana Jones, now he knows what anti-Semitism is.

It was an inevitable lesson I’d hoped to delay as long as possible. Just as I still hope to delay his discovery of the Holocaust and the intergenerational trauma shared by all Jews who have lain awake thinking about how the horror would have happened to us if we had been there—and how easily it could happen again.

Our swastika incident wasn’t an isolated one. Not during this summer of hate. Just since Charlottesville, three Toronto-area schools were scrubbing anti-Semitic and racist graffiti off their walls and playgrounds. More was found across Winnipeg. Even as I was writing this, a friend posted an image from Montreal’s Mile End where someone spray-painted “Arbeit Macht Frei” above a children’s slide. It means “work sets you free” in German, and was the Nazi slogan posted at the entrance to Auschwitz and other concentration camps. Elsewhere, anti-Semitic flyers and graffiti were reported in New Jersey, Pennsylvania, Michigan, Washington D.C., and Delaware. A banner displayed over an Oregon read “UNJEW HUMANITY.”

In the UK, anti-Semitic hate crimes have reached a record high, much as they have in Canada. In the wake of Trump’s election, they soared 86 percent in the U.S. during the first four months of 2017. This prompted fearful headlines like “American Jews are planning their exit strategy,” echoing an earlier Atlantic magazine cover story that wondered “Is It Time for the Jews to Leave Europe?”

Anti-semitism emanates from the left as well. The Chicago Dyke March made headlines earlier this summer for kicking out two Jewish lesbians for having a Pride flag emblazoned with the Star of David. They claimed the symbol of Judaism, akin to a Christian cross or Islamic crescent, made “people feel unsafe” because the Star of David is also on the Israeli flag and that “Zionism is an inherently white supremacist ideology.” (One of the marchers later wrote: “I had to leave because even if I saw this as a Jewish Pride flag, ‘this is seen as an Israeli Pride Flag and offensive to others.’”) When called out, the organizers doubled down with the snarky tweet “zio tears replenish my electrolytes,” borrowing a turn-of-phrase from the KKK, white supremacists who most certainly do not consider Jews to be white.

Then there’s Wonder Woman, this summer’s biggest film, starring Gal Gadot, an Israeli whose grandfather survived Auschwitz, and is about a superhero who fought Nazis in her original 1941 origin story (the movie transposed it to WWI). The movie sparked a heated debate over whether or not Jews are white—a narrative which the Washington Post noted has “seen a resurgence since the presidential election last year.” It also sparked controversy over Gadot’s social-media support for Israel in the horrific 2014 conflict with Hamas-led Gaza that started with the kidnapping and murder of three Israeli teens and ended with the death of nearly 2,200 Palestinians.

There is, of course, nothing wrong with opposing the Occupation or the Israeli government’s anti-Palestinian policies. I oppose both and I also support a two-state solution. But too often “anti-Zionism” on the left crosses into anti-Semitism. Calling Israelis “European colonizers,” for example, refuses to acknowledge that Jews were once indigenous to the Middle East and largely returned in the aftermath of the Holocaust. It also refuses to acknowledge that Zionism began as a late-19th century response to surging anti-Semitism that would grow into the Nazi genocide of six million Jews. Zionists originally saw establishing a Jewish state in their ancestral homeland as a safety imperative—and it’s as wrong to ignore this context as it is to ignore subsequent mass mistreatment of Palestinians.

But while Jews may feel attacked by both sides, those sides do not pose similar existential threats. It’s true that the left conflates Jews with a foreign government’s policies, consequently diminishing anti-Semitism as “the most abused term in Canada today.” Yet, these politics are ultimately rooted in legitimate concerns for the Palestinians. The other side is Nazis.

We Jews exist in a strange liminal space, and have since the Diaspora. We are from places but not of places. We are successful and we are scapegoats. We are a minority but an invisible one. We are always other. I first learned this while standing out in the hallway in Grade 1 as the rest of the class recited the Lord’s Prayer every morning. It is one of my earliest memories. I also recall watching black-and-white WWII footage of Jewish bodies being bulldozed into mass graves in high school. I was, again, the only Jew. I saw myself amidst the skeletal remains. Nazis weren’t just Indiana Jones bad guys for me. When I travelled Europe, I encountered former Jewish ghettos in every city. When I finally visited Dachau, I realized that Germans lived right nearby the concentration camp. They let it happen. Many must have ignored it until it was too late.

More recently, I discovered the alt-right before I had a name for them. A couple years ago, I began to encounter online harassment whenever I mentioned in an article that I was Jewish, including one that compared Canada’s rejection of Jewish refugees in the 1930s to the current backlash against our country’s welcoming of Syrian refugees. One of the Twitter Nazis who commented on the stompability of my face used an avatar of a cat with a Hitler moustache and an SS cap. Somehow the image’s ironic absurdity made it more frightening. From there, I went down a rabbit hole of brazen online neo-Nazism—a pocket of the internet that, at that time, was hidden, ignored.

Anti-Semitism also used to be easier to ignore. Relatively long gone were the days of university quotas, “none is too many” immigration policies, and bans on buying property or going to the beach. There are only 14 million of us left in the world, still two million fewer than in 1939, but from the safety of Canada it felt like that was in our past.

And regardless of the debate over our whiteness, most of us are white-passing enough to escape the systemic discrimination faced by people of colour and Muslims. I don’t get carded by the cops. I breeze through airport security. Most of the anti-Semitism I experienced growing up was from people who casually used slurs around me without even knowing I was Jewish. Our invisibility is why Hitler forced us to wear a yellow Star of David for easy identification.

Still, I don’t feel quite white. I don’t feel like a person of colour, either. I feel Jewish, which is something else. And I’m an atheist, so it’s not because of a 6,000-year-old religion. Jews are both an ethnicity and a religion—like Arab Muslims or Irish Catholics, but with the same word used for both. Blood, not faith, was how Nazis defined us. Is how Nazis define us. The inchoate hatred of Jews rises and falls, but ignoring it doesn’t make it go away. This summer, this year, has been a stark reminder of that.

Post-Chartlottesville, Univision asked “Why do white supremacists hate (white) Jews so much?” Afterall, the alt-right protest also involved militiamen that stood threateningly with semi-automatics outside a synagogue. I could answer some of that hate is rooted in the same beliefs that have plagued us since before my great-grandparents fled the Russian pogroms—that we are subhuman parasites who secretly control the media, governments and world banking. But the current strain also blames Jews for civil rights, multiculturalism, non-white immigration and other social changes since the 1960s. They believe we are “the root of all evil.” One neo-Nazi told the Univision reporter that: “It is the Jew that is the true enemy of all humanity on this planet! All the other races and racial problems we have go back to the Jew, and the focus should never be removed from them.”

This summer is coming to a close but the fight against white supremacy is clearly just heating up. Hate is not just found in Charlottesville, or in far-right media such as Breitbart and the Rebel, or all over Twitter. You can find them in the White House. It’s time for us all to come together. We need the left to acknowledge that white supremacy threatens Jews and bolsters wider anti-Semitism. And, we need Jews to fight back against racism, Islamophobia and other forms of hate as fiercely as we fight anti-Semitism. We must recognize that we are all targets.

I’ve never felt more Jewish, or more scared as a Jewish parent, than I have since I started seeing swastikas and Sieg Heil salutes all over my television and timeline—the theoretical danger of anti-Semitism manifested in the streets, history repeating. But it didn’t come from nowhere. It never does. It was ignored. And it grew.

The most important phrase in post-Holocaust Judaism is “Never Again.” It should be our most important phrase period. I want my son to live in a world where Nazis and white supremacists are in history books. It’s the world most of us want to live in, and there are more of us than them. Saying this is “not normal” is no longer enough. We have to say never again and we have to deliver on that promise.