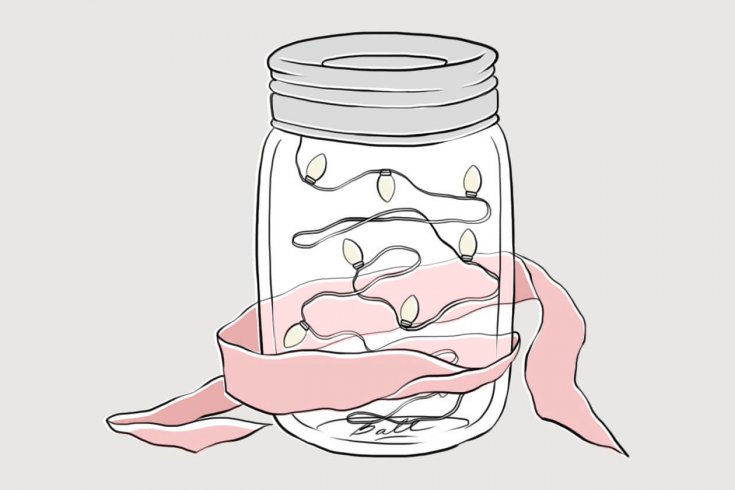 When my fiancé and I began planning our wedding in 2016, we agreed that we didn’t much like the traditional approach: the stiff white gown, the dozens of white roses, the vanilla tiered cake. We wanted a party that reflected our personalities—who wouldn’t? We didn’t immediately realize that we, and other couples like us, had already been parodied in the Onion (“Horrible Couple Really Wants Wedding to Reflect Their Personalities”). Perhaps inadvisably, we soldiered on with our plan.

I soon learned that the non-traditional, DIY wedding trend is not actually a way of opting out of the out-of-control Wedding Industrial Complex. Rather, it’s just another wedding style subgenre, with its own twee and adorable headaches.

Contrary to what I’d first assumed, choosing the hipster DIY route did not mean that we’d necessarily avoid spending as much money as that couple with a banquet hall decked out in white tulle with a bored wedding deejay playing “The Macarena.” It just meant that we could spend it on other things. Like sourcing authentic, post-industrial marquee signage that spelled out my and my intended’s names. Or ordering 200 mini pots of organic jam made with local, foraged berries. Perhaps a parkour-inspired engagement photo shoot with us leaping across urban rooftops would help us remember the wild abandon of our love forever? Oh, and also mason jars, obviously. Lots and lots of mason jars.

Even if couples who choose indie weddings manage to avoid the more obvious spending traps, they’ll make it up by spending time and mental energy: worrying about getting their donut wall just whimsical enough, worrying about their chalkboard calligraphy looking imperfect but still Instagram-worthy, worrying about whether the Sanskrit phrase they plan to coo to one another is cultural appropriation. As I worked to organize our nearly 200-person post-wedding party, I soon felt like a very low-rent Kim Kardashian—making endless aesthetic decisions was my new job, even though I wasn’t especially good at it. The thing with DIY weddings, of course, is that it eventually dawns on you that you’re doing it yourself.

In the world of genuine suffering, this is barely a contender, of course. I’m grateful that all I had to worry about was mason jars, and not the truly immense challenges such as spousal abuse and child marriage faced by women and girls with less control over their marital lives. I’m also endlessly thankful we had financial help from our families. That being said, it wasn’t long into our planning before we began getting on each other’s nerves and fantasizing about eloping. We wanted the party to be breezy and relaxed, yet the mounting pressure to create breeziness felt exhausting. Hiring a paint-by-numbers wedding planner soon seemed like it would have been a genius move.

All too often, wedding labour is gendered. While my fiancé helped with as much of the planning as he could, brides still tend to take on most of the work and anxiety in heterosexual couples. Wedding marketing has long focused squarely on brides, who are most vulnerable to the mythos that this is the most significant day of their lives. Everything from thick, ad-filled bride fashion magazines to Etsy newsletters are chiefly aimed at women, armed with a ratcheted-up emotionality that makes spending hundreds on a Swarovski hairpiece seem not only justified, but important. As a feminist, I found it easy to ignore pressures to be a crystal-tiara-wearing perfect Martha Stewart bride. But I didn’t know how to react to Pinterest images suggesting, innocuously, that I spray-paint my own metallic pine-cone centrepiece. Was this empowering or tiring?

The date on our invitations was just a month away. Thanks in part to friends and family pitching in, we had an emcee, caterer, deejays, speeches, and skits for a party that was meant to follow a small City Hall ceremony. I’d managed to avoid impulse-buying $2,500 artsy raver dresses and instead found a shockingly pretty $159 (USD) silver-grey gown in the junior prom section of an Arizona shopping mall (seriously). I still didn’t know how I was going to decorate our old-timey, slightly dark venue, however. It dawned on me that I was stupidly out of my depth. What idiotic hubris had convinced us that we could do this in our spare time? People were flying in from Montreal, New York, and the UK for this, so the place couldn’t look like a college birthday jam. Friends and family offered help, but I felt embarrassed and slightly ashamed that I needed any (this was supposed to be DIY, remember?).

I found a life raft on Facebook one day. The Bunz Trading Zone is a Toronto-based bartering community where members trade just about everything from couches to wine to advice. “I found it on Bunz,” was a phrase I’d heard friends say repeatedly before I knew what they meant. Begun as a Facebook group, Bunz has grown so large it launched its own mobile app early in 2017, and has been noted as a friendly Canadian face in the online sharing economy. When I discovered it had a subgroup, Bunz Wedding Zone, I joined it too, though I wasn’t sure it would help. Soon, however, my despair turned into an opportunity for commiseration, advice, and even friendship.

Numbering nearly 7,000 members, most of them women, Bunz Wedding Zone is a venue in which to trade gowns (“Wedding dress, never worn,” went more than one poetic post) or to vent emotions (“I’m no longer looking forward to my wedding,” went another post by an exhausted bride asking for help).

I was scrolling through when I came across Jenny Yuen. A bride-to-be who was about 30 times more organized than me, Yuen had already bought her decorations for her wedding scheduled for months after mine and was offering to lend them out. I looked at her meticulously catalogued pictures of decorations in disbelief. Nearly everything I needed was there. There were huge, room-transforming white paper lanterns; LED remote-control lights; antique mason jars; vases and other sundries. There were strings of pretty, copper indoor lights that looked like fireflies. All Yuen wanted in exchange for borrowing them was $100 worth of TTC tokens or a grocery store gift card (Bunz is a cash-free zone).

“The wedding industry machine is hell-bent on having you spend, spend, spend,” says Yuen, who is a Toronto Sun journalist. She said that trading wedding swag helps cut down on both expense and waste. “If I never see another mason jar, chalkboard sign or piece of burlap again, I’ll be happy!” Bunz gives couples a way to extend their wedding labour to other couples. Yuen’s work of compiling all her decorations into one single post saved all the couples she rented to the work of scouring Amazon or downtown stores looking for the same exact things. And it gave Yuen and me a chance to chat and commiserate.

Planning a massive party for our dearest friends and family was all we ever wanted, but it had also been isolating. No one cares about your anxiety about whether guests will have adequate parking, or what will happen if it rains. Or deep-seated fears that you will trip on your hem and everyone will laugh at you. Besides, all this angst was stupid. We’d chosen all this, after all, hadn’t we?

Connecting with other soon-to-be brides to whom I didn’t need to explain anything about my stress levels was a game-changer. I realized that people hadn’t left the group as soon as they got hitched. They stuck around to offer tips, sympathy and encouragement. Requests for help were often met with dozens or even hundreds of responses from strangers. There was greater visibility for LGBTQ members here than in other Facebook wedding-themed groups, and requests for inclusive photographers or caterers got tons of referrals.

Bunz was lightening the load of folks at every stage of the wedding sausage factory. On Bunz you can ask and you can offer (for help, advice, recommendations or items to trade), and few asks go unanswered, whether it is the bride-to-be who wanted to know if she could rock a white pantsuit to the altar (verdict: definitely) or the woman freaking out over judgmental, meddling parents (verdict: we’ve all been there). Incredible stuff happens, like the woman who offered to lend out her black leather jacket reading “Just Married” that she’d had specially made for her party; response was so overwhelming that she was practically renting it out every week.

Could the existence of Bunz—and community resources like them—be a kind of antidote to the hipster-industrial wedding complex? A way of relieving the pressure the wedding industry still exerts? In some ways, yes. In others, however, it falls short—and even exacerbates the problem. While Bunz offers opportunities to reduce the load of your wedding dream/nightmare, it also acts as an amplifier. Spend any length of time there and you get roped into the self-affirming logic of wedding-ness in general. You may scroll endlessly through other people’s pictures and the details of their plans, wondering why your groom never got special groom cufflinks. You may see someone’s plans for a photo booth or karaoke machine at their party and suddenly decide that your more minimal plans to get hitched at City Hall aren’t gonna cut it anymore (pro tip: City Hall is cheap and great). Wedding mania becomes endless.

The overwhelming effect of Bunz isn’t really wedding mania, however—it’s kindness. Recently, one woman posted on Bunz about the bittersweetness of selling her wedding dress. After a string of sympathies, another woman responded with her perspective: a used wedding dress is a gift to someone else. It democratizes access to luxury. “I never could have afforded something as beautiful as my dress if it weren’t for the generous soul who sold it to me for half the original price,” she wrote. “So if you decide to sell your dress take comfort in the fact that you are making another bride’s wedding dreams come true.”

If that’s not a back-door out of big-spending logic of the wedding industry, I’m not sure what is.

Sarah Barmak is a journalist and author based in Toronto.
Shayla Bond

Shayla Bond is an illustrator and textile artist in Toronto, Ontario.