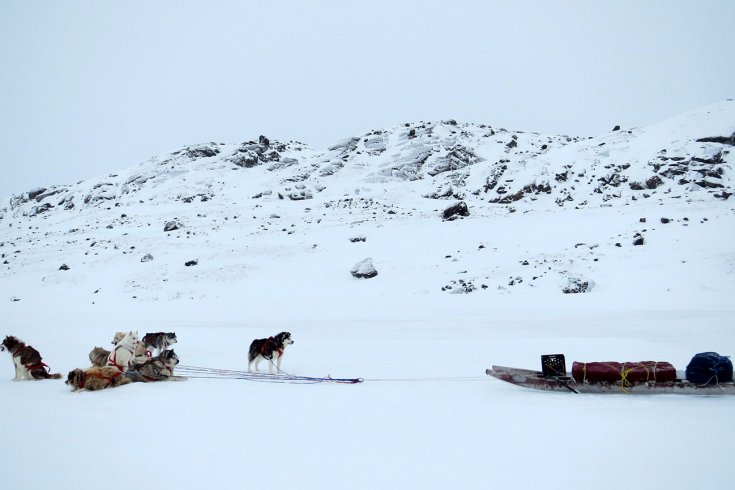 “Dogsledding is the calmest thing. Until it’s not.”

It is a cold Saturday afternoon in mid-December, and I am with William Hyndman, a thirty-one-year-old social entrepreneur, eleven kilometres northwest of Iqaluit, in Sylvia Grinnell Territorial Park. Just under halfway through a five-hour trip, we have brought our well-worn qamutiq and eight purebred Inuit sled dogs to a halt by using an old snowmobile belt as a brake. Like a lion tamer with a nylon whip, Willie has also stopped another eight dogs, who have caught us from behind—but with no sled attached to their lines. Now, I am meant to keep our team in check while Willie figures out what to do with the recent arrivals.

Our dogs—Skittish, Fram, Gobi, Gibson, Henson, Freya, Gjoa, and Taqiq—know that I have never done this; they pay me little attention as I ineffectually tell them over and over, “Down.” Especially Taqiq, who as Willie puts it, is one brand of troublemaker.

Willie has invited me along with him, adventurer-photographer Erik Boomer, and lawyer Patrick Bruce. Boomer, as everyone calls him, is preparing for a 120-day circumnavigation of Baffin Island by going out on shorter trips several times a week. He and Patrick are ahead of us and out of sight, along with the seven dogs Willie keeps calling the A-team (our dogs, by contrast, are the less impressive “Mighty Ducks”). The batteries in their GPS-radio are dead, and they don’t hear Willie asking for backup. Either that, or they’re ignoring us.

Ten or fifteen minutes have gone by when Josh Armstrong, an intern architect with Stantec, pulls up on his snowmobile, with Paul Crowley riding behind him. I am supposed to meet Josh in a couple of days to discuss the purpose of my visit, modern Arctic architecture. I am caught off guard to see him with a hunting rifle strapped to his back, but this seems to be how things play out in Nunavut. Buildings of any sort feel like a world away from these snow-covered hills, which are the same colour as the overcast sky.

Josh and Paul confer with Willie, who keeps watch as they go back to retrieve the qamutiq. Things eventually get squared away: the loose dogs are reattached to their sled and head south toward the capital, Boomer and Patrick circle back looking for stragglers, and then the four of us and our dogs continue the journey northward.

Time passes quickly on the sled: Willie and I take turns “steering” around boulders and working to stay behind the dogs on downhill slopes. We accomplish this by jumping off one side or the other, pushing against a plastic milk crate that is tied to the front. Willie spurs the dogs on with “Hike!” and “Ba-ba-ba-ba!” We both run alongside or just in front of the team to encourage them further. But as the few hours of daylight disappear, this quickly becomes a recipe for tripping, which Boomer does ahead of us, landing on a rock and smashing his phone.

This far above the tree line, everything from the wood of our sleds to the protein bars we snack on is brought in by plane or sealift. At one point, I ask Willie if he thinks Iqaluit, a community of nearly 7,000, has a different relationship to the environment than, say, Edmonton, his hometown. He thinks for a minute before saying it probably does. But at the same time, the notion of garbage is still new here: knowing what to do with a candy bar wrapper or an empty shipping crate can pose real challenges. Just look at the town dump, which burned for over a hundred days earlier this year.

Nearing the end, we pass the airport as an ATR 72 takes off into the falling snow. On the left, an iconic yellow passenger terminal and CF-18 hangers. On the right, the yard where many of the town’s dogs spend their days and nights, each with his or her own little house. When Willie and I pull up, Boomer and Patrick have already unharnessed their team. All that’s left is to reward the A-team and the Mighty Ducks with some pork offcuts from a local butcher. These scraps are put to good use: across the street, a Caterpillar 980 pulverizes some of wooden shipping containers that bring the world to Iqaluit.

×
For just $10 a month, you can help keep our journalism available to all.
×