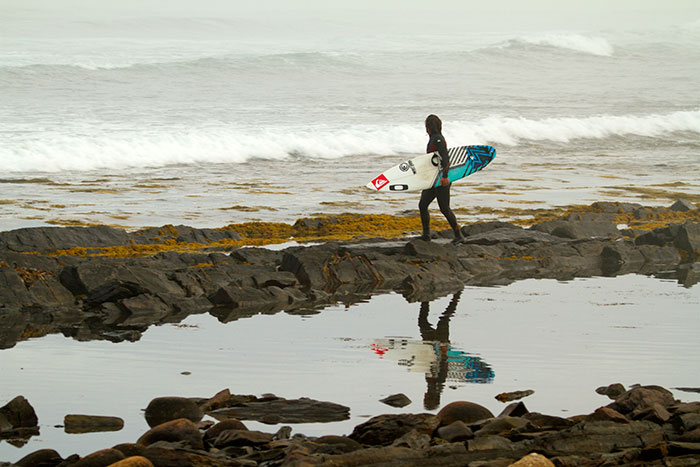 Last september, Hurricane Katia made its way north along the Eastern Seaboard, bringing winds of 140 kilometres per hour, riptides, and “life-threatening surf.” As it bore down on the coast of Maine toward Nova Scotia, it swept an Irish tourist to his death.

On September 8, Nico Manos, twenty-eight, rose before dawn and began monitoring the unpredictable winds. Then he packed up his surfboards and hopped into a silver Toyota truck with photographer Scotty Sherin, who shoots local surfers for various publications; and Noah Cohen, twenty-two, a bleached-blond surfer from Tofino, British Columbia. They drove west from Manos’s home in tiny Lawrencetown, Nova Scotia—away from the masses of wetsuit-clad surfers gathering on the local beach—in pursuit of the storm’s more fearsome waves.

Though Nova Scotia is not a traditional destination, its surf community is growing steadily, drawing such pros as Americans Alek Parker and Dana Quinn. Locals know that the biggest waves come during hurricane season (broadly June to November, although the best waves hit the province from September to November), and surfers typically keep to safe, popular spots like Lawrencetown. But Manos, who took up the sport in his mid-teens, is a “free surfer.” Most days during hurricane season, he gets up before 4 a.m. to monitor storm paths and wind patterns on meteorological websites. Some days, he and Sherin clock close to fourteen hours on the road, searching for impressive backdrops and waves that hit the shore just right.

The perils of crowding and the advantages of being first 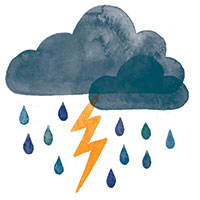 In the year AD 19, Roman emperor Tiberius—known for his “abject timidity,” to the point of hiding under his bed during violent thunderstorms—imposed strict limits on gladiator games and other public entertainments. When, eight years later, word began to spread that a gladiator competition was planned in the town of Fidenae, five miles outside of Rome, “men and women of every age” flocked there in search of amusement. Unfortunately, Fidenae’s amphitheatre had neither a solid foundation nor proper load-bearing beams; the tiered framing gave out under the weight of spectators, and the structure collapsed. “Those who were crushed to death in the first moment of the accident had at least under such dreadful circumstances the advantage of escaping torture,” wrote the historian Tacitus. The disaster killed and maimed 50,000 people, whose “screams and groans” could be heard throughout the night.

By staking out the best spots—and keeping them secret—free surfers generate more impressive photos and greater bragging rights. Manos goes to awesome lengths to keep his spots unknown. “It’s pretty selfish,” he acknowledges. This makes his pastime more dangerous: if he were to get injured on the rocks below, there’s a chance no one would find him. (He has suffered subluxated shoulders and a broken ankle, but notes that surfing is “probably still safer than football.”) His and Sherin’s vehicles sometimes break down in remote locations or on private property, and they have had to pay strangers to help them out.

Today we’re headed to a reef break tucked behind empty summer homes along the province’s south shore. Manos has told a tight group of fellow surfers where he is headed; en route to their destination, he receives calls from lesser-known acquaintances, asking if they can join in. “I once spent two hours trying to figure out how to get out here, because there are so many little roads that go off,” he says. “They’re going to get lost for sure.”

Turning off the main highway, the group weaves between houses perched on rocky cliffs and along narrow dirt roads. Behind them lies nothing but churned-up sea, and from the road you’d have no idea. Manos’s phone rings; it’s a friend who has already arrived at their destination. “[They’ve] only been watching for five seconds, and they saw a double-overhead set,” Manos says. The prospect of surfing “a double overhead” (slang for waves that top three to four metres in height) lightens the mood in the truck. Kid Cudi is cranked. A car speeds by in the opposite direction, and the passenger uses his left arm to mimic the curl of a wave crashing over his head. Manos turns to Cohen. “You got some butterflies there? ”he asks. “A bit of excitement? ”

They park in the driveway of an abandoned summer mansion along the road. Behind the house, knee-high yellow grass ends abruptly at a rocky cliff. Jagged, stratified rocks lead toward the water, big brown steps into the ocean. Under those waves, which roll in three metres tall against the reef point, the rocks are just as sharp. “We’re gonna get smoked,” says Manos, looking out over the coast.

The next day, the waves are more fierce, and Manos, Sherin, and Cohen head out to a new spot. There, they encounter a stranger: a well-travelled American surfer and his wife visiting from California. He had come to Nova Scotia armed only with a picture of Manos in action, a fish processing plant visible in the corner, and he had driven from community to community, asking fishermen to guide him to the plant. Manos is surprised—the spot is pretty unknown, even to Nova Scotians—but, like Manos, the American understands free surfing’s unwritten etiquette. The spot remains a secret.