Fringe—produced by J. J. Abrams’ Bad Robot Productions, which was also responsible for Lost, the films Cloverfield and Super 8, and the Star Trek reboot—is a procedural drama that explores “fringe science,” a field wherein seemingly unfathomable phenomena are explained. At today’s shoot, for an episode entitled “Welcome to Westfield,” the elder Bishop is unpacking why a nondescript New England town is falling apart. He draws a Venn diagram on the blackboard, elucidating in excited tones, “For reasons I am yet to deduce, our Westfield has merged with the Westfield from the alternate universe, trapping the three of us in the overlap… This is just phase one.”

“What’s phase two? ” asks Dunham. On cue—with help from the crew, who yank on the suspended bugs—the scene “shakes.” Westfield, Vermont, is about to implode. Only this is not actually Westfield; it’s Van Tech, an old high school in Vancouver.

Drawing the universe’s most mediagenic extraterrestrial 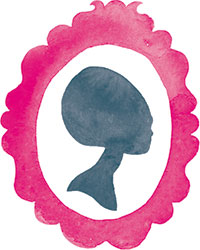 The diminutive, almond-eyed Grey has served as pop culture’s stand-in extraterrestrial, appearing onscreen in the roles of both abductor (making off with Agent Fox Mulder in one X-Files episode) and autopsy subject. Though some believers claim the Greys hail from the binary star system Zeta Reticuli, their origins are much closer to home: H. G. Wells’s article “The Man of the Year Million: A Scientific Forecast.” Published in the November 1893 issue of the British newspaper the Pall Mall Budget, the story is not about aliens, but rather human beings in the year AD one million. Wells draws on Charles Darwin to describe our evolution of “large, lustrous, beautiful, soulful” eyes, set in “glistening, hairless dome[s], terete and beautiful.” Channelling popular anxieties about the rise of machines and the dwindling use of man’s bodies, he imagines future humans with slight frames, “dangling degraded pendants to their minds.” The description was applied to aliens in Wells’s The War of the Worlds, in which the invading Martians are compared with Homo sapiens’ “final structure,” as predicted by a “speculative writer of quasi-scientific repute.”

Vancouver has long been known as Hollywood North, thanks in part to tax incentives, established infrastructure, and its proximity to LA. In 2010, 246 films and TV shows were produced in BC (mostly in Vancouver), generating over $1 billion. Less known is that many local productions are science fiction; as of this writing, Supernatural, Fringe, Alcatraz, Once Upon a Time, and Eureka are all filming here. As a result, the city serves as a mecca for sci-fi fans. When I was in Las Vegas a few years ago to attend the annual Star Trek convention, my hometown generated much ado: “Ooh, Vancouver,” purred my fellow geeks. “That’s where all the best shows are filmed.” One day, as I was walking past the central library, I saw a Japanese tourist point, snap a photo, and say, “Battlestar Galactica,” in perfect English. (On that show, the building was central to Caprica, the capital city of the Twelve Colonies; on Fringe, it’s the Fringe Division headquarters—in one universe, anyway.)

It all started with The X-Files, which came here to reduce production costs. Then, as now, Vancouver was a small young city with a schizophrenic visual identity: a blend of architectural styles and over-asserted neighbourhoods, which meant it could stand in for any number of places and times. Add to that the relative proximity of suburbia and farmland (the green fields of Ladner are less than an hour’s drive away), and you can easily see the blueprint.

The X-Files used these locations out of necessity, compensating for the city’s smallness by tightening the lens, darkening every corner, and working the drippy, dystopian weather. As with Jaws, the viewer imagines what might be possible in those depths (famously, Spielberg felt his animatronic shark looked fake, and favoured the threat rather than the shark as the scare). The horror or amazement that registers on Scully’s and Mulder’s usually passive faces in The X-Files says as much as any wide-angle shot could.

When The X-Files became hugely influential in the ’90s and beyond, it seemed only natural to imitate what was in essence an accidental aesthetic. And since then, several sci-fi properties have come looking for the show’s feel: If you seek dystopia, nothing beats Vancouver’s in the rain (Supernatural, Dark Angel). Weird suburbia? You got it (Smallville). The future? Sure! (Battlestar, Caprica.) “We may not have red brick, but we have fantastic alleyways,” says Catou Kearney, a long-time Vancouver location manager who has worked on Fringe for a year. “Our streets are nondescript enough that it can become whatever you need it to.”

Fringe acknowledges its debt to The X-Files: in an early episode, the camera pans over a crime scene, passing a television showing Scully and Mulder; in another, a government official links the Fringe Division with “the old X designation.” Sci-fi in Vancouver, then, has become M. C. Escher–esque; one hand draws the other. The genre and the city form a single consciousness, not unlike the organic/mechanical links between human hosts and the Borg (Star Trek, incidentally, has never filmed here, but the new Bad Robot film might).

Back on set, while the crew adjusts the cameras, Joshua Jackson asks what I’m writing. When I mention The Walrus, he asks if I’m from Toronto. “No,” I say. “Good,” the native son deadpans with a smile. I explain my thesis, that Vancouver is to sci-fi what sci-fi is to Vancouver. “I think you’re on to something there,” Jackson says, before amiably posing for a photo with a teenage girl. Then he straightens his coat, sets his shoulders, and morphs from the boy who grew up in Vancouver’s Kitsilano neighbourhood into the world-hopping Peter Bishop—Duchovny redux. A puff of mist follows him into the alternate universe.

Kaitlin Fontana (kaitlinfontana.com) is a comedian and a frequent contributor to The Walrus.