How to Build a Better Tree | The Walrus
Skip to content 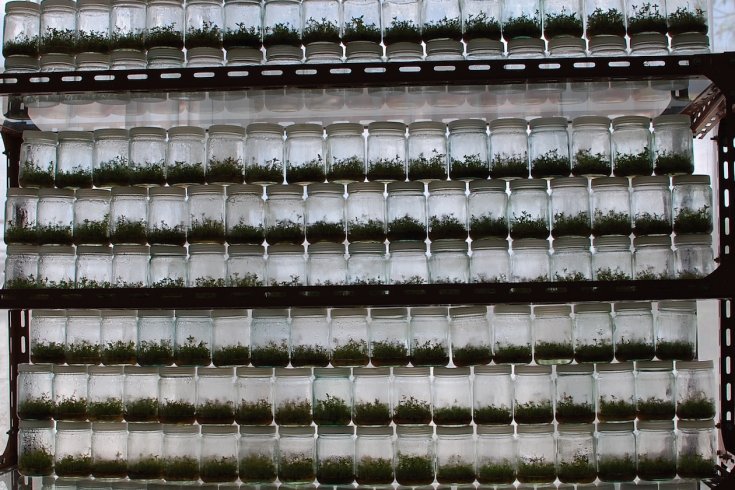 Snaking farther into China’s monsoon tropical forest on Hainan island, our minibus sped past squat stone houses, longhorn cows, and chickens, all shrouded in a haze of garbled greens. We’re hours away from Haikou’s pulsing traffic and nocturnal neon lights, but the rural roads are still packed; motorcycles, e-bikes, and logging trucks fight for space on roads the colour of PEI dirt. It’s August, and I’m here to see one of China’s largest tree plantations—and the likely future of the pulp and paper industry. Our bus lurches in a pothole and stops, and I step outside into the sweaty air humming with mosquitos. I roll my pants up another notch. Endless, orderly rows of identical trees stretch to the horizon.

At 68,000 hectares, Asia Pulp and Paper’s eucalyptus and acacia plantation on Hainan has the same spatial footprint as Edmonton. Roughly 80 percent of the millions of individual specimens here are eucalyptus, Wang Liyong, nursery head at APP’s Hainan tree lab, tells us through our interpreter. Though they could be harvested now, Wang says, the trees will be left for another two years to maximize growth. Already, they tower above us like utility poles. Huddled together, the trees appear ornamental. I study their patchy bark, the way it wraps around their spindly trunks; the meagre canopy drops its leaves like fat green beans.

The minimal foliage is all part of APP’s plan. It’s all been accounted for: species growth rate, trunk girth, everything down to the individual trees that were selected to produce the shoots that became the quick-growing eucalyptus we’re standing beneath. Because on this plantation in the South China Sea, deep in this manufactured forest, a forced evolution is underway.

A public-relations battle ensued. APP accused Greenpeace of making “completely unsubstantiated and false claims” to industry and the public, but it eventually relented. In February 2013, the company released a forest conservation policy in which it committed to working with global environmental NGOs to audit their activities and immediately eliminate real—i.e., naturally grown—trees from its supply chain. Greenpeace applauded APP’s efforts, saying the company appeared “genuinely committed” to meeting its zero-deforestation targets. Today, the company produces more than ever—including an increase in its tissue paper capacity to 3.1 million tonnes annually and a recently built $2.6 billion (US) pulp mill in Sumatra—and most of its products are made with trees grown for that exact purpose. Each year, APP processes 19 million tonnes of pulp and paper from these trees.

APP didn’t invent the tree-cloning process it now employs, though it has expanded it to a scale few other global paper companies can match. Like the selective breeding humans use for dogs and horses, Hainan’s eucalyptuses all emerge from a relatively small number of trees. Each year, plantation staff working smaller plots identify trees that may possess the ethereal “right stuff” to become a mother tree—ideal genetic qualities including hardiness, height, thickness, and fast growth—from which all future generations grown at Hainan will spawn. Those trees singled out to be mother trees are tagged with GPS so staff can locate them among millions of nearly identical trees. Two or three candidates are selected. Each season, these new mothers are allowed to grow twenty-four months longer than their utilitarian counterparts before being cut down, their stumps left to sprout new trees in the open space left in mother’s absence. Typically, a new tree emerges from the stump within two-and-a-half years, Wang tells us, much faster than growing new trees from sprouts in a lab—another way plantation trees have helped APP go cold turkey on cutting down virgin forests.

The process continues some three hours away from the plantation where the mother’s peeled bark, all that’s needed to foster new trees, is brought to APP’s Hainan nursery. To see how nursery technicians build trees from torn bark, we stop at the nursery in front of a three-storey grey administrative building coated in stucco. Windows are open, letting in a shallow breeze. Standing at the door in their matching blue APP uniforms, Wang and the head of seedling development, Fu Mingshen, hand out black plastic booties to cover our shoes before ushering us in.

Four-and-a-half million eucalyptus and acacia tree sprouts are grown each year at this seventy-hectare nursery, Fu tells us. That’s an average; in 1999, the best year on record and also before APP stopped cutting virgin forests, Fu’s team planted 9 million trees. Soon, we leave the admin offices for the laboratory. We pass several thousand six-month-old eucalyptus trees in plastic trays by the roadside. The height of a toddler, these juveniles lived for months indoors before they were transferred outside to face life in the elements. They stretch their dozen oval leaves towards the sky, lilting left and right with the sun. I gingerly pull a root structure from the tray; it sways between my fingers. You’ll be printer paper, I think. I look up as Wang and Fu aim their iPhones at me, taking photos of this foreigner inspecting their trees.

Inside, four tables have been pushed together and topped with hundreds of intricately packed glass containers resembling Mason jars. Three locals (APP employs four dozen people here for low-skill activities such as weeding and watering) fill each jar with several ounces of clear gel. It contains an ever-changing mix of minerals, sugars, nutrients—a tree’s basic nourishment. Tinker with the ratio and you can manipulate a tree’s future growth, Fu says, boosting traits to make them grow tall and ruler straight.

From tiny fragments of peeled mother tree bark emerge cultivated shoots that become new trees. At a scant three centimetres, delicate as butterflies, they’re pinched off. I look through a window and see four women, their long black hair tucked under white caps, their faces and bodies covered in white masks and cloth, crouching over stainless steel tables lit with hard light. iPhones glow on metal stands between them. Beside each woman sits a collection of empty jars and a container of tangled wisps—tree sprouts, plucked from the mother. With long tweezers and surgical precision, they grasp budding stems and insert rooting ends into the gel, twenty-five to a jar.

A nearby room draped with muted sunlight contains a miniature forest. Filled jars are stacked three-high on industrial shelving units. Some sprouts have barely rooted, sending thin, exploratory strands into the gel, while other sealed containers, clouded with condensation, are thick jungles of vegetation. After forty-five days in the jars, shoots are pulled apart and placed into individual packets of cloth-wrapped soil. From there, it’s a further six months in the shaded nursery before arriving at the plantation; from there, it’s the pulp mill.

Canada would struggle to match the intensity of cloning and planting trees and the scale undertaken on Hainan. Beyond the sheer scope of the Chinese plantation is how quickly eucalyptus, a species not suitable to our colder climates, can grow, achieving a size in thirty-six months that a slow-growing conifer would need eighty years to reach.

The more I considered the prefabricated forest and the elaborate process through which the trees came to life, the more I struggled with the lengths we go to feed our insatiable appetite for stuff. Don’t get me wrong—raising sustainable paper supplies is far better than the alternative of clear-cutting tiger habitat or peatland that locks in greenhouse gases; there should be no return to APP’s destructive past. Yet even the most sustainable fibre-production process must sometimes ignore that what’s better for the planet (if not a paper company’s bottom line) would be a wholesale rethink of how, what, and why we consume and could result in a drastic scaling back. “Forests are not first and foremost lumber factories and warehouses for raw material,” notes arborist and bestselling author Peter Wohlleben in 2016’s The Hidden Life of Trees.

Building a better tree is only a reasonable solution when overconsumption is overlooked. And paper consumption—from facial tissue to luxury packaging to adult diapers—is rising globally. The world produced 370 million tonnes of paper products in 2009; that figure jumped to 407 million tonnes just six years later.

As we walked among the plantation’s eucalyptuses, stepping through underbrush and over brown puddles, I was struck by how little reverence I held for the space. Typically overcome by a calm and quiet adoration when I walk between trees, I took in the eucalyptus plantation the same way I beheld APP’s monstrously huge paper-making machines in Ningbo days earlier: with fascination, sure, but for something made by people, not nature. Perhaps that’s how we’re supposed to feel here in this working forest. Nothing catches in my throat when I walk among corn stalks. There is no messy biodiversity here, no soft needles sagging underfoot, nothing natural. The plantation is a site for commodity processing, not trees.

Humans are built to survive using things from nature we kill for our purposes. “The real question is whether we help ourselves only to what we need from the forest ecosystem,” Wohlleben writes, and “whether we spare the trees unnecessary suffering when we do this.”

Part of this means allowing trees to live their lives in “true forest ecosystems,” he writes. But are APP’s plantations not, in their own way, a tacit acknowledgement of this right of trees to live undisturbed and a step towards making that happen? Without them, it would surely be harder for humans to uphold this pact and would likely result in us sending loggers back into virgin rainforests. Hello takeout cups, goodbye tiger habitat. For this beneficial understanding of the plantation to appear true, however, each eucalyptus must be mentally divorced from any notion we have of trees in natural forest ecosystems. One is living for our sake, the other for its own.

After touring the nursery, we piled back into the minibus, gearing up for the long haul back to Haikou. Outside our windows, the organic specimens passed by—cloned, planted, and managed by humans in a Never Let Me Go fashion, existing with no purpose beyond what we gain by harvesting them: photocopy paper, takeout containers, boxes to hold cigarettes.