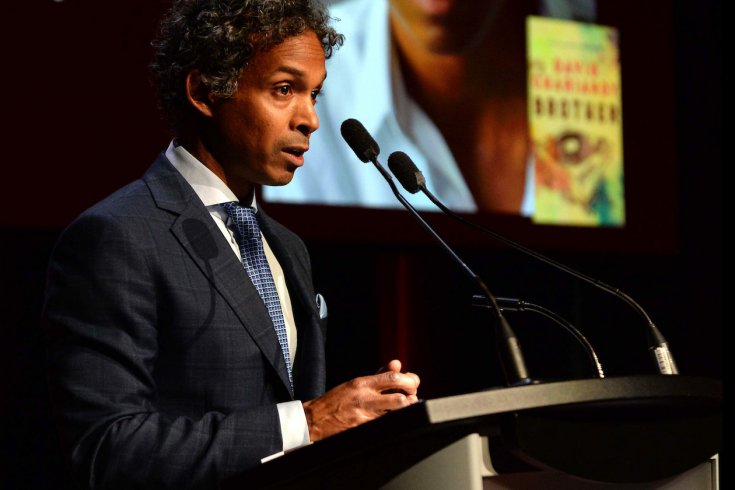 David Chariandy’s second novel, Brother, is set in the Toronto suburb of Scarborough—otherwise known as Scar-bro, Scarberia, Scarlem, or Scarbistan, depending on your particular location and relationship to the area. For those unfamiliar with this eastern fringe of the city, Chariandy’s eye is keen. He serves up the “security lights and rust-stained buildings,” the strip malls and parking lots, the groceries selling produce in foreign languages, the multi-lane roadways, and the big box stores. Here is where black and brown families live as the majority of the population. Where their children go to school. Where mothers and fathers doing shift after shift wait for buses in the freezing winter. Where they send for their relatives or send money back. Here are the shops and homes they claim as their own.

After Brother won the Rogers Writers’ Trust Fiction Prize on November 14, Chariandy was quoted saying that he hoped the novel would help readers “think a bit more carefully about the people they may pass in the street but they may not truly think about.” It’s hard not to connect that statement to his protagonist, Michael, and Michael’s brother, Francis: both “ragamuffins” and “hooligans” rummaging through dumpsters and scampering through their Scarborough neighbourhood looking for entertainment. While their Trinidadian, single mother goes to work, they navigate a youth of injuries and humiliations, of a social hierarchy that recognizes the look of “no money” on their faces, and of neighbours with different accents who nevertheless share origins in one colony or another. In this world, they learn that their racialized bodies, however young, communicate far more than the bodies of others. While Francis carries himself with a swagger and charm that admits him to an older group of musically talented boys who “spoke and gestured in ways that asserted connections beyond Scarborough, to scenes in New York and LA,” Michael is timid, “nervous,” so unlike his brother that those boys “couldn’t figure out what, genetically, had gone so wrong.”

Michael’s story unravels across two timelines. There is the unusually hot summer when news outlets air reports about “immigrants” and “ethnic communities” as the source of neighbourhood violence. This is the same summer Francis is fatally shot in a shop during a confrontation with police. He demands an explanation for their presence (“What did we do?” he shouts at the cops) and pays dearly for it. Then there’s the timeline that opens the novel: the winter, a decade after Francis’s death, when Aisha, a childhood friend, returns to a cluster of buildings and townhouses called the Park to visit Michael. Her life has changed, but Michael’s is frozen in time. He still lives in the same apartment and sleeps on the same bunk bed.

Chariandy doesn’t rush us with explanations and reasons for Michael’s state. Instead, he uses flashbacks to delve deeper into Michael’s history with his late brother. Brother’s structure is one of the canniest features of the novel. The connections between sections function much the way memory does. An intersection, a smell, the sound of a particularly Trinidadian word in a particularly Trinidadian accent—these launch Michael into a different part of the narrative, or cause him to revisit something he’s already told you but with new details. The seams between his adult life and his childhood are porous, the better to mimic the gaps wrought by trauma, and the story of his life with Francis sits at the center of it all.

Brother depicts Scarborough’s dynamics without sacrificing any of its dissonance. Manny, Michael’s assistant manager at the big box store, gives lectures about “people pulling themselves up by their bootstraps” even while he conducts drug searches of employee lockers. Mrs. Henry, a “stern uplifter of fallen individuals,” is quick to leave a casserole at one’s door but unable to take the glass dish back without betraying “that awkward look” of judgement. There are the neighbours, the ones who might display “everyday acts of kindness” but who also understand “the costs of stigmatization” and have been known to write fake addresses on job applications, lest the Park ruin their prospects. Rather than leveraging flat sympathy for the way “neighbourhood kids were stopped by the cops,” Chariandy weaves together the depiction of how the kids were “watched by everyone,” with a lively portrait of Desirea’s, the barbershop-cum-music studio where Francis takes Michael to hang with his DJ friends. The result is a deep-seated understanding of this community’s struggle for comfort and connection and of life under the constant threat of police violence.

Chariandy’s first novel, Soucouyant, was also set in Scarborough. In the ten years since its publication, Chariandy has become better at turning the suburb—which he describes as having “mushroomed up,” having “yellowed, browned, and blackened into life”—into a mirror for the complex reality it houses. Brother reflects a very different picture than what CanLit usually peddles: comfortable and self-soothing narratives about our supposedly progressive cities.

The most stunning display of emotional intelligence in the novel is its treatment of Ruth, Michael and Francis’s mother. A stern single woman who toils daily for the benefit of her children, Ruth is the immigrant mother readers will recognize. She’s the tough-as-nails caregiver who doesn’t show weakness, who allows herself to rest only when absolutely necessary. She is giving to a fault, and in a place such as Scarborough, giving means more than providing. It means preparing your children against the worst of the world. “You think this is a joke?” she says, warning Michael and Francis not to answer the door while she’s at work. “I will beat you so hard your children will bear scars. Your children’s children will feel!”

After a shooting that kills a friend before the brothers’ eyes, they’re brought home by police officers who find them at the scene. Ruth, ashamed and embarrassed that the neighbours are watching, confronts Francis in one of her many pleas to stop his becoming what Trinidadians call “harden.” She wants her children to be “examples” of the good immigrant: respectful, hard-working students who rise up society’s ranks without ruffling any feathers.

Like so many parents, Ruth directs her rage at her children because she believes it can protect them from the rage and violence of other people. She deeply fears how the state, the street, and countless manifestations of the two can destroy them without a second thought.

What she ends up inadvertently teaching Francis, though, is not how to be an “example” but how to read the bodies of others for danger. Michael tells us that “he could read the faces of the neighbourhood youth hanging around outside 7-Eleven and know when to offer a nod or else a sly joke or else just to keep moving and not just then attempt to meet a bruised pair of eyes.” It is devastating for a young boy to have to learn this instead of enjoying the freedom of childhood. It is far more devastating, however, that even this knowledge cannot protect him.

Chariandy prizes emotional reality—the intricacies, faded images, and quirks of life—over neat plotlines, so it’s not surprising he offers no clear resolutions. The novel’s masterful closing pages recall the police interview about Francis’s death. Michael is asked to “clarify,” to “remember,” to “affirm” what happened in the shop. But he knows the exchange exists to prove a pre-existing narrative of Francis as having “a bit of a reputation” and of having “unpredictable moods.” To Michael, it is “a conversation too late and somehow all beside the point.” At the very end, Aisha’s visit spurs a gathering of old friends, where the music on the record player can wash over everything else. And while Ruth’s mental state has deteriorated, she still plans to visit the creek near Rouge Valley, a place she introduced to her boys: “A wound in the earth. A scar of green running through our neighbourhood.”