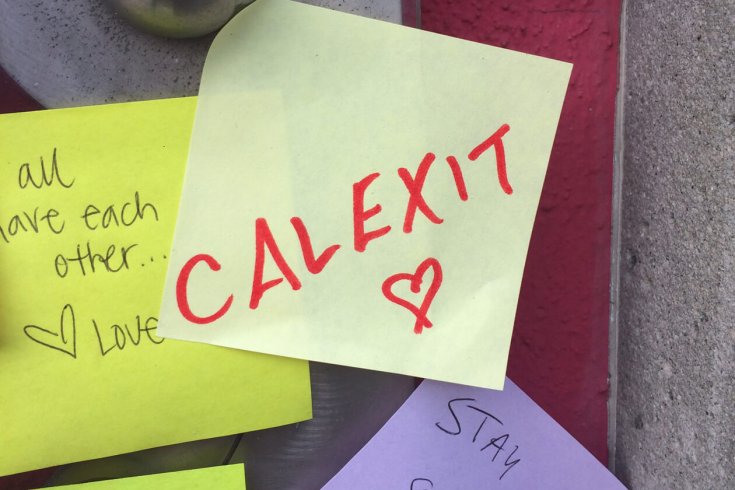 My sense of belonging to Canada came at the moment I was faced with the prospect of losing my place in it. The night of October 30, 1995, my parents held a gathering for thirty friends to watch the Quebec referendum returns on TV. Outside, the Montreal night fell quickly and very few of us spoke, ate, or breathed. I was fifteen years old.

The vote teetered over the line between Yes and No for hours. When the results broke for the No campaign, it was by such a small margin—54,288 votes—that we experienced more a sense of relief than of victory. The federalist vote had won, and my family, their friends, all of us Anglophones had affirmed our right to stay in Canada. But 2.3 million of our neighbours had betrayed us. That’s how it felt at the time: we were surrounded by people who’d decided their enfranchisement, their identity, precluded ours.

Quebec would remain tethered to Canada, but unbeknownst to me, my parents made a different decision that night. Across the room, their eyes met; there was no need to speak or negotiate. It was time for us to go. My parents felt that as Anglos, Quebec had no place for us. The moment high school ended, we moved to California.

Those years in Quebec, “It was like the country you thought you were living in was no longer your country,” remembers my mother. There could be no better way to sum up my own feelings, and those of millions of fellow Americans, after the election of Donald Trump. Coping with the aftermath has split my American friends into two camps. One group is in the fight. They protest, sign petitions, binge-donate to non-profits, and call Congress members every day. Others have turned off the channel completely, booking last-minute trips to Mauritius, Costa Rica, and other faraway places with little Internet access. Fellow writers have told me they are in “internal exile,” a term invoked by artists who stayed in Germany during the Nazi occupation. They work on what’s in front of them. They don’t engage beyond it.

And then there’s the #Calexit crusade, which evokes an unpleasant sense of dêja vu. Although the effort to have California secede from the union and gain independence for the world’s sixth-largest economy is still a fringe movement, it has gained some powerful backers in the tech sector. Proponents have already filed language for a proposed referendum in March 2019. It’s a long shot: even if a majority of Californians voted for it, enacting the legislation would require an amendment to the US Constitution and the approval of both chambers and thirty-eight states.

But it’s a sentiment I understand all too well.

Let me be clear: I reject separation completely. There is no way you can convince me that anything could justify being legally separated once we are bound together as a country. But based on my experience in Quebec, I find myself wanting to warn my fellow Blue Staters that there’s a deeper process we need to undertake: that of emotional resettlement, of finding a new whole to identify with.

Canada stayed together after 1995, officially. But Quebec never ended its emotional journey to define how it belongs to the country, and how it belongs to itself. I went on a similar journey. I still have (and cherish) my Canadian passport, but my loss was permanent. My status as an emotional refugee began with the referendum, and our plans to leave. But it didn’t end until I’d traded my sense of belonging in Quebec for a sense of belonging in California.

We Blue Staters are now the emotional refugees, millions of us. We lost this election, and a lot more besides. We lost our illusions of belonging to a fractious but inclusive America. The one that honours individual freedoms and a form of governance grounded in our collective common values. Like kindness. Don’t forget kindness.

The fact is, sometimes your side loses an election. That’s part of the process. But this time, we’re not just on the losing side: we’re on the outside. This country we loved and believed in has left us. What do we belong to now? Over the next four years, there are aspects of the culture we’ll leave behind, walk away from, just as we feel it has rejected us. But some things are left that we’ll need to walk toward.

Geographically, of course, we are staying put. But emotionally, we are divested. Where will we find our new homes?

We’ll need to find them in ourselves. And for that, I look toward Quebec.

Tens of of thousands of Anglophones left Quebec after 1995, just like my parents and I. But lately I have been thinking about the people—friends and family included—who stayed behind to participate in a civil society that is still very much at odds with itself.

The referendum campaign was my political awakening. I was old enough to grasp the stakes, and for the first time, I felt like I was part of something bigger than myself. I remember the historic Unity Rally in the Place du Canada. My classmates and I skipped school and walked downtown, where I tried to perch on a stack of unwieldy police barricades and catch a glimpse of the leaders on the dais. I remember Jean Charest’s curly Afro, the buses of waving Canadians from other provinces and the enormous flag the crowd held on its shoulders, as big as a hundred flattened parachutes.

On the night of the 30th, after the votes were counted, I sprinted onto Sherbrooke Street with a friend, shouting and waving a Canadian flag. Many drivers honked in support; some yelled abuse.

Now I think back to that night and imagine the devastation and the loss for all the people who were so sure history would go another way. They, too, were motivated by wanting to belong. I can see how, having touched the dream, watching Jean Chrétien declare victory on TV must have felt as dejectedly surreal as it still does when I turn on the TV today and see the words “President-elect Trump.”

Quebec nationalists voted with their hearts, not with their heads—so went the narrative at the time. I have heard that patronizing description applied to some of the people who voted for Trump, too. But if it is true, then it only reinforces my belief that now is not the right time to change hearts and minds in America. Painful as it is for a liberal arts–educated journalist to admit, there are limited possibilities for dialogue in a climate characterized by either recrimination or retreat. But it is possible to try something else.

I’ve lived outside of Quebec for eighteen years now. Sometime after I left, Quebecers—Francophones, Anglophones and Allophones—got to work creating a society they felt they could belong to, whatever the passport. There were some major moral failures at the government level (the Quebec Charter of Values comes to mind), but I’ve also seen major progress toward integration, regardless of political beliefs. Many of my Anglo friends now work in French all day. They’ve married and befriended French Canadians. Their kids are growing up bilingual in a distinct, multicultural society. When I visit Montreal, I feel more comfortable in my own skin than I ever did growing up.

That’s the feeling I want for this country. And it won’t come from turning our backs on the federal government. The wisdom of separatists was not in the instinct to leave; it was in defining exactly which values mattered to them, and using those values as a template after the referendum to find a way to belong inside Quebec, and also inside Canada—for now, at least.

We will all live in Trump’s America, but that doesn’t mean we should back down from the challenge of living the way we want our society to function. No one can take those values away from us. They transcend us and, ultimately, define our neighbourhoods and local institutions.

The harmony in Quebec may be illusory. If certain politicians have their way, someday my friends’ children may also find themselves voting in a shattering separatist referendum. And they’ll need to confront the same questions of allegiance that we did. But by then, concepts of “us” and “them,” “insider” and “outsider,” may have changed.

I now know that staying is one thing, belonging another. After I left, Quebecers built a society that holds hope for the latter. It’s still a fraught and emotional experiment. But it’s a feeling we Blue Staters will need to get used to.

Julia Scott (@juliascribe) is an award-winning journalist and radio producer currently based in San Francisco.