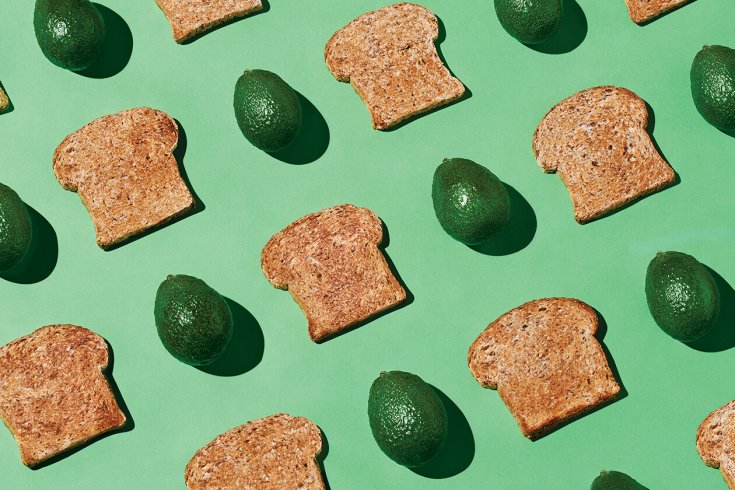 You can find it in North Van­couver, topped with slices of watermelon radish and a tangle of pea shoots. Or in Fort McMurray, Alberta, served with hemp seeds and tomatoes. In Ottawa, it comes layered with chickpeas, lime, and harissa.

Avocado toast has become a cliché—a kind of shorthand used to ­slander young people for their food-­purchasing choices. But it is also a genuine reflection of the way that eating in Canada has changed. A generation ago, we did not spread avocado on our morning toast. That we do now is thanks, in no small measure, to free trade: it’s ­unlikely that Canadians would be consuming this now ubiquitous and ­Instagrammable breakfast treat were it not for the North American Free Trade Agreement, which, in 1994, struck down various ­economic barriers between ­Canada, the United States, and Mexico and gave us a plentiful, year-round ­supply of avocados.

In 1988, Canada imported 6.9 ­million kilograms of the fruit, almost all of it from the United States. Back then, you couldn’t just write ­avocados on your ­grocery list and ­expect to find them in a Canadian supermarket. They might have shown up wrapped in nori in a “sushi” California roll or sliced over bowls of brown rice in vegetarian restaurants, but they were uncommon. As NAFTA eli­minated tariffs and other limits on trade and investment—including America’s ban on Mexican avocados—imports grew more than tenfold. By 2017, Canada was importing almost 80 million kilograms of avocados a year, nearly every one of them from Mexico.

It is dangerous to confuse correlation with causation. In the last three decades, a suite of other factors has altered food production: integrated supply chains, changing ­consumer tastes, and the rise of greenhouse agriculture. But none are as sweeping as NAFTA.

Donald Trump continues to ­pursue trade wars and call the continued existence of NAFTA into question. And because it’s been so long since free trade was introduced, it can be easy to lose sight of the very basic ways it has reshaped our lives. In addition to many other economic ­effects, NAFTA has profoundly changed the way we eat and grow food.

Most of us don’t think twice about buying tomatoes in ­January or lemons in July. We have become so accustomed to every fruit and vegetable being available twelve months a year that we forget it wasn’t always this way.

Before NAFTA, Canada placed sea­sonal tariffs on certain types of produce, like lettuce and cauliflower. US and ­Mexican imports of crops like these were more expensive during the summer months, when they were available from domestic growers. With the protectionist price barriers down, one ­major ­incentive to buy local disappeared; growers had to adapt to the changing marketplace, and many farms were consolidated into large-scale operations. From 1994 to 2017, the market value of Canadian agriculture grew from $24 billion to $59 ­billion. Since NAFTA was introduced, total agri-food imports to Canada from the United States increased by $19.2 ­billion, or 264 ­percent; from Mexico, the jump has been 1,105 percent.

We can’t go head to head with American growers for the same crops at the same time, says James Vercammen, a professor of food-and-resource economics at the University of British ­Columbia: our ­higher cost of labour and land, and their economies of scale, mean Canadian farmers cannot compete ­directly. But eli­minating tariffs creates new opportunities for the ­agricultural sector here, by allowing us to export ­produce when our growing ­season yields harvests that ­Americans lack. Which is why, Vercammen says, ­British Columbia is “now growing raspberries and blueberries like crazy.”

BC blueberries, it turns out, ­provide a good framework for explaining the complexities of importing and ­exporting produce. Because of the warm, sunny weather blueberries need to thrive, many regions have a ­growing season of ­only four to six weeks. But the ­climate of BC ­allows for a ­longer season: ­nearly three months, from ­early July to late September. Canadian farmers didn’t use to ­export the berries extensively, but since trade barriers have fallen, those blueberries have been able to travel all over North America. Blueberry production in BC has grown from about 4.3 million kilograms in 1980 to 61 million kilograms in 2017.

Here’s how this seasonal dance card of blueberries works. In winter, Canada starts getting blueberries from Peru, then Chile and Mexico; by late March or ­early April, the berries are coming in from Florida. As the season there wraps up, blueberries start ripen­ing a bit farther north, and begin arriving from Georgia, then California and Oregon. Just as New Jersey is finishing its season in ­early July, Washington starts shipping—and so, now, can BC, which sends its berries to ­California, Washington, and beyond.

That’s about as far north as blue­berries grow; once the BC season is done, the cycle leaps back down to the southern end of the map—the price jumps as well, to incorporate freight costs—and starts all over again.

As a consumer, it’s easy to overlook the miracle of trade co-operation necessary to make all this happen. Considering the ephemeral lifespan of a fresh blueberry, its export is a marvel of organization: many economic and agricultural levers working together, rather than any one jurisdiction trying to best its partners and “win” at trade, as Trump has famously put it. “People get pro­tectionist,” Vercammen says. “And then you lose all the comparative ­ advantage... If you go to a NAFTA, where ­everything opens up, you’re going to lose on some things...and hopefully gain on some others.”

Those gains are not always ­numbers on a ledger: culture piggybacks on food trade as well. “When I came to Canada fifteen years ago, even to find one can of pickled jalapenos, it was almost impossible,” says Elia ­Herrera, chef and partner of Los ­Colibris, El ­Caballito, and El Patio restaurants in Toronto. Herrera used to have to buy Thai chilies to substitute for Mexican. But our tens of millions of kilos of ­imported ­avocados, consumed in the form of guacamole, have been a gateway for Mexican cuisine, which has taken off in Canada in the last decade. So have ­ related food products, along with those avocados, which are further influencing the way we eat. These days, Herrera can import everything she needs from ­Mexico, from cactus to guajillo ­peppers, through a distributor—something that ­also wasn’t happening much before NAFTA. “Now I can find ­literally everything,” she says. “Even epazote, the wild herb. And, because of that, I’m able to provide very authentic Mexican cuisine.”

At Herrera’s downtown-Toronto restaurants, diners embrace a diversity of ­modern Mexican cuisine, from coconut ­ceviche to vuelve a la vida (cod and octopus ­cocktail) to a ­vegan version of chiles en nogada (stuffed peppers). This is not because ­diners suddenly developed more sophisticated tastes on their own: food trends and shifts in our eating habits don’t burst forth out of nowhere. Twenty years ago, most Canadians didn’t know Mexican food ­beyond the Tex-Mex we gobbled along with other American ­cultural exports — ­movie ­theatres only started selling nachos in the mid-1990s. By the time Gwyneth Paltrow ­endorses something like avocado toast, it’s evolved out of immigration, agricultural, and trade policies that have allowed chefs, and the ingredients they love, to travel here. 🥑

Corey Mintz has written for the Globe and Mail, the Toronto Star, and the New York Times.
Jens Kristian Balle

Jens Kristian Balle is an award winning Canadian based portrait and conceptual photographer who has created content for The Walrus,
Universal Pictures, The New York Times, Starbucks, Telus, BC Hydro, Forbes Magazine, TC Transcontinental
and The Wall Street Journal.