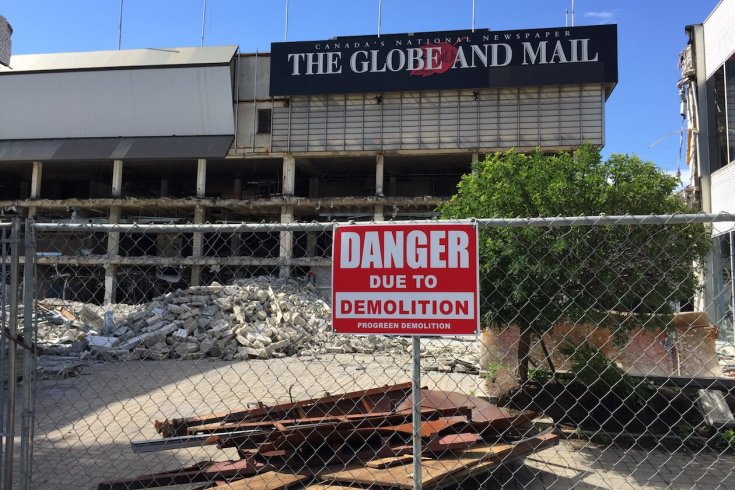 I’d like to tell you that I was shocked yesterday when I learned that the Globe and Mail had axed star columnists Leah McLaren and Tabatha Southey. That I wrote the pithiest caps-locked tweet I could. That I pretended to have a subscription just so I could pretend to cancel it. Instead, my deflated reaction disappointed even me: Well, of course. Of course, in its seemingly frenetic bid to survive, the Globe had jettisoned two of its loudest, most socially progressive women. As organizations that study women and media frequently remark when such things happen: If this surprises you, then you haven’t been paying attention.

The Women’s Media Center keeps tabs on gender representation in US journalism. According to the centre’s 2017 report, men accounted for, on average, 62 percent of bylines and news credits across TV, print, online, and wire services. Men also drown out women’s voices in topic areas where women are perceived to rule. So far this year, men have written more than 50 percent of bylined news articles and opinion pieces about reproductive issues; women, less than 40 percent. Men also wrote 55 percent of the stories and opinion pieces about sexual assault; women, just over 30 percent. In most cases, when finding sources for these stories, men overwhelmingly interviewed other men.

Gloomier still: this year’s study showed that diversity representation is trending down, not up. Faced with these dismal numbers, I can’t help but picture the media industry as an endless hall of funhouse mirrors— a single man talking at different versions of himself into infinity.

There’s little reason to think Canada is doing drastically better than the US. A 2016 study of Canadian media discovered that 71 percent of all sources quoted the previous year were men. The Globe, it’s worth noting, is actually a little bit worse than average, holding at 73 percent. Considering this, it seems naïve to believe Southey and McLaren—both holdovers from the Globe’s flush era of print and probably two of the most expensive bylines on payroll—would survive the financial cuts.

The idea that the paper belongs to its male readers and its male journalists appears so deeply ingrained in the Globe—and Canadian media—that it has become utterly unremarkable. Of the Globe’s remaining columnists—that we know of, at least—fifteen are men and seven are women. As has been previously reported, they are all overwhelmingly white. And it doesn’t help matters that of the ten editors on the Globe’s masthead, only three are women.

But this goes beyond questions of representation. The Globe isn’t merely failing women; it’s failing, period. Just days before news of Southey and McLaren leaked, the Globe had been busy shrinking other sections of the newspaper. When it comes to the paper’s weekday print edition, management decided to keep the Globe’s news and business sections as standalones, but sports, as well as life and arts coverage, will no longer exist as their own territories— they’ll be folded into the other two. This, in turn, comes on the heels of a decision to cut the paper’s Atlantic print edition for the end of November. If Canada’s paper of record is in survival mode, then, I’m curious: who exactly is it surviving for?

Southey’s column was cut once before, in 2010, and public outcry restored it. She has nearly 50,000 Twitter followers, a feat for any Canadian who isn’t Drake or Margaret Atwood. And even those who eye-rolled their way through some of McLaren’s more myopic columns (hey there, #lacgate!) seemed to cheer the sublime irreverence of her post-firing email to Globe editor-in-chief David Walmsley. In it, she mimics Walmsley’s dry tone, calling out his “inexcusable management style, appalling jargon-filled memospeak and a complete lack of human empathy.” She pointedly suggests that, after seventeen years of writing a column, she perhaps deserved at least a personal note (he reportedly sent out identical emails to her and Southey).

McLaren is riffing off a particularly puzzling bit in Walmsley’ note about the Globe’s apparent review of its “freelance footprint.” That review, Walmsley wrote, “considered overall gaps and strengths in our current and future coverage plans and overall budget priorities.” Beyond admiring the masterclass of saying nothing in a single sentence, I have to wonder if Walmsley knows what he’s talking about. One of the Globe’s biggest “overall gaps,” after all, is its lack of female voices. And, until yesterday, one of its “strengths” was employing a columnist like Southey, someone willing to tackle the most pressing issues in the country: denouncing the alt-right and racism, or writing boldly in favour of Indigenous reconciliation. For a paper that’s combatting irrelevance, letting her go feels short-sighted.

Its remaining women columnists include: Lysiane Gagon, who writes from a Quebec perspective and whose columns have not appeared online since May 2016; Sarah Hampson, a “life columnist,” whose column suffered an online hiatus from April to August; western arts columnist Marsha Lederman; and arts and entertainment writer Kate Taylor. On the social issues beat is Elizabeth Renzetti, a feature writer who writes often, but not exclusively, about women’s topics, and Denise Balkissoon, who covers everything from white nationalism to feminism. Globe men, on the other hand, write more broadly—from health, business, and entertainment to politics, national affairs, and sports—largely because there are more of them.

The real winner in all this appears to be Margaret Wente, the habitual plagiarist who recently called the debate over taking down controversial monuments, as well as the issue of coding for kids, both silly and faddish. I don’t have to agree with Wente or think she’s an excellent columnist to see how she benefits the paper, its readership, and its ability to build conversation. But when it comes to social issues such as education, Indigenous rights, women’s rights, and the rising alt-right, Wente’s hidebound opinions are isolating her and the newspaper she writes for.

More cuts are inevitable, and, in their wake, a new vision for the paper will emerge. As it stands, however, the Globe appears to be closing ranks around a certain kind of columnist, while simultaneously remaining stubbornly oblivious to the suggestion that one of the reasons it’s failing is because it has not made gains with readers who crave more diverse writers. All of it diminishes the Globe’s role as a facilitator of robust and rigorous conversation—its stated mission to be our country’s “leading forum for world-class opinion and debate.”

Perhaps that’s no longer how the Globe envisions itself in these leaner times. If so, that’s too bad. Not only does it show a discouraging disconnect from the current national discussion, it makes for a less interesting paper. Younger readerships in particular are craving a multiplicity of voices and experiences, and with them, a more authentic, engaging and relevant representation of the world. It isn’t always about identity politics; it’s about the ability to connect with people on the page, or on the screen, to learn from them, to be surprised and inspired, to feel a little less alone in a increasingly fractured society.

It’s true that two white women—especially two established white women—are the barest minimum when it comes to meeting these goals. And we are, make no mistake, dealing in bare minimums when it comes to Canadian media. But it’s also true that if the Globe wants to thrive—if it wants to do more than merely exist in a narrowing circle of older, white, back-patting, small-c conservative readers—then it needs more voices.

The Globe’s restructuring provides an opportunity to meet our appetite for change—to respond to, and not flout, this urgent, anxious reordering of the world. I want the Globe to prove me wrong. I want to discover next week that it’s decided to replace these women with what it sorely needs: more diverse columnists, ones that furnish a truer reflection of our vast country.

Until then, the Globe has revealed something about itself, and perhaps us too: that, despite everything that’s happening in the world, our most influential institutions appear too scared to change.